I have a quad copter that had an unexpected crash shortly after takeoff, running Arducopter version 4.0. This drone is fitted with dual GPS units, one regular GPS and one RTK GPS.

The craft was powered up and let sit for a while to allow RTK to get a lock. Very quickly after takeoff the craft lost altitude and crashed. The log shows a couple of EKF errors while in flight, and following the crash there were a ton of EKF_YAW_RESET errors repeating every 5 ms.

What could have caused this crash and why are there so many errors?

I’ve attached the binary log of this particular flight.

The EKF resets are all coming after the crash. I can’t say if that’s the chicken or the egg. But here’s my take on it:

While the drone was in a hover I see a torque imbalance, that the CW motors (3&4) are working harder than the CCW motors (1&2). This could mean that there is a twist in an arm, or some other mechanical issue with the airframe. 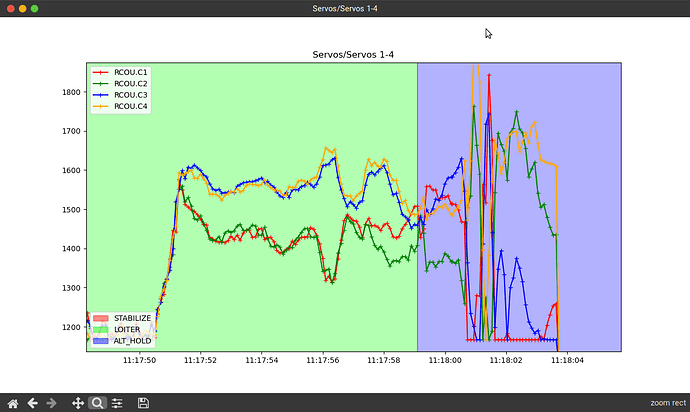 When everything goes wrong and it starts to pitch up the front motors (1&3) are slowing and the rear motors (2&4) are speeding up. To me this looks like it’s trying to correct the pitching up. Again, since the correction is not successful this is suggesting some kind of mechanical failure. The current monitoring isn’t working so it’s hard to say if you lost a motor/ESC, or if something in the airframe let go and the motor moved.

While the drone was in a hover I see a torque imbalance, that the CW motors (3&4) are working harder than the CCW motors (1&2). This could mean that there is a twist in an arm, or some other mechanical issue with the airframe.

If CCW has the twist and to compensate that CW motors rotating higher RPM?

There is no way of telling which are is twisted, and how much it is twisted just from the logs. It there was one, we would tell you.

The problem is that it depends on the direction they are twisted. So as @amilcarlucas has said you can’t really tell from the log. It’s going to require a physical inspection to see. Measure the heights and locations of each motor. It won’t take much to cause a problem.

For examble:
If we analyse the log with motor outputs PWM plot …
Which motor PWM output goes high from normal flight we may conclude that particular motor has the problem…

In the same way can we able to conclude which arm or Motor order have the problem?

You could spend a lot of time doing data analysis to try and figure it out, but really a few minutes with a straight edge or a flat surface will do better.

Where i said i used 4.0.x i am always use updated latest release only.

You posted this under the Copter 4.0 topic.
To avoid confusion please select the correct topic on future posts.

I just not classify the problem under 4.0.x or 4.1.5 …it’s just general clarification which suits whatever the firmware versions.

Thank you guys! I wasn’t exactly sure where to post it, so I figured I’d try Copter 4.0 considering that’s what was on the drone.

I’ll upgrade to the latest 4.1.5 firmware. It seems the arms were indeed twisted so I’ll have to straighten that out first before I can do another test.