Stabilize and FBWA modes cause plane to dive

I just started out using ArduPlane 3.7.1 on a Pixhawk. I have it setup on a FliteTest Explorer with 3 channel + flaperons. I was able to setup the firmware and configure the flaperons with no major issues. When I flew the plane, I took off in Manual mode with no problems other than a little wind. When I switched to Stabilize mode, the plane yawed up and down a lot, changing >10 feet in altitude each dive or climb. I quickly switched back to Manual and was able to land. When I launched again(in Manual mode) and, once flying, switched to FBWA mode, the same result occurred. As a result of these movements and my corrections, I ended up folding the wing. I’ve attached the log of the two flights, could someone please tell me what I’m doing wrong?
Setup:
FT Explorer with Sport winghttps://www.flitetest.com/articles/ft-explorer
Emax GT2215/09 motor
9x6 prop
Pixhawk running Arduplane 3.7.1
3DR Power Module
3DR uBlox GPS/Compass module2017-04-23 15-50-47.bin (3.2 MB)

First (unlikely) idea: are all your control surface directions correct? To check this, put the plane (un-armed) into FBWA mode, and roll/pitch it with your hands. Observe that the control surfaces “do the right thing” to return to level flight.

Second idea: Did you tune your plane? There’s an Autotune mode for this

Thanks for the suggestions. I tried flying the other day in autotune, but because, if I understand the docs correctly, autotune runs on top of FBWA mode, the plane dove towards the ground and I had to switch out of autotune to recover. Is there a way to fix this? I can post the logs if needed.
Thanks,
kk6axq

It does look like the pitch is going in the wrong direction.
The moment you switch to FBWA the DesPitch goes down followed by the pitch.
As @hunt0r asked, have you done the ground tests to make sure the surfaces go in the right direction for FBWA? 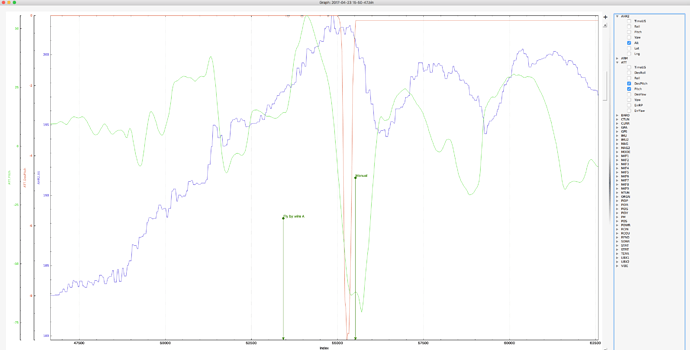 I armed the plane in FBWA and moved it around, the elevator moves in the correct direction, though, when level, it seems to be less than 10 degrees up elevator, but that would cause the plane to pitch up, not down. Any other thoughts on what’s causing this? BTW, what software @mboland did you use to graph the data?
Thanks,
kk6axq

I use APM Planner for graphing, it has the best features and interface for clarity.

A question, have you trimmed in manual flight mode and then completed another radio calibration to set that trim into the FC?