I’m currently setting up a TREX 700, and I’ve got the RPM1 parameter reading the RPM signal wire off the ESC so I can display it on the hud, but not sure what to set the RPM scaling value to, its currently reading way too high. I think there’s a formula for this somewhere, but can’t seem to locate it.

Jeff, I don’t know that that actually works. I don’t know if your ESC puts out PWM or frequency pulse for the tach signal. I suspect it’s just one pulse per pole in the motor so with 8.46:1 your motor is spinning 12,690 rpm @ 10 pulses per revolution. Or a pulse frequency of 2115Hz. Which with your gear ratio would be 1.4Hz per revolution of the head.

At any rate I never got it to work. I ended up going to hall effect switch on the main transmission gear and use RC telemetry to feed headspeed to the radio. And then set an alarm in the radio to alert me if headspeed drops more than 10% in flight, at which point I can get into Stabilize right away before it drops further and autorotate the helicopter. I’ve used that feature twice - once with a blown clutch and once when the motor shaft broke in another heli, and saved the heli with an autorotation both times.

The advantage to using RC telemetry is that if you fly without the ground station (which I do quite often), you still have headspeed monitoring to warn of a power train failure.

Ok Chris thanks, I think you are correct, if I set the RPM scaling ratio to .014, I think it will be dead-on. Scouring through a lot of older posts, that seems to be how most of the RPM signals are sent, 1 pulse per pole.

Its definitely working on my end, I think the key is you have to make sure the relay function is disabled if you plug the RPM signal wire into either Aux 5 or 6, I’m using Aux 6 or pin #55. It doesn’t read-out right away however, but it starts to send an RPM signal at about 30 or 40% throttle, and it updates smoothly throughout the whole range.

I understand what you’re saying about not using a ground station, that does have its advantages, but I use mine every time being I like having a larger display and I also have it call out flight modes, voltage, and other warnings audibly which really helps.

I want to get this working for the exact reasons you stated, so if the RPM starts dropping unexpectedly, I’ll have a chance to do something about it before it gets too low or goes into an autorotation like you said.

I think you are correct, if I set the RPM scaling ratio to .014, I think it will be dead-on. Scouring through a lot of older posts, that seems to be how most of the RPM signals are sent, 1 pulse per pole.

You may have to play with that a bit and verify actual rpm with a strobe tach or something. The code maybe got fixed from the last time I tried it.

Only problem on a heli is that if you blow the jesus bolt or the overrunning clutch you won’t get a low headspeed warning. That’s why I feel it’s best to to use a hall effect on the main transmission gear (the one that drives the tail). But not all helicopters are made the same there either. Some have the autorotation gear pressed onto the overrunning clutch sleeve instead of being splined, keyed or bolted to the mainshaft, and if the jesus bolt blows the whole mainshaft comes out.

Yep, I do have an optical tach, I plan to check it with that, I seem to be getting reasonable readings now.

And yes good point, if I have a drive-shaft related catastrophic failure, that’s a different matter, reading RPM off the ESC will only help if I lose the motor for some reason.

So how does the ESC read rotor speed in an auto. The motor stops right? Or is the motor always coupled to the rotor. I have a one way bearing on mine but I converted a nitro heli to an electric. So the motor uncouples in an auto.

I believe that’s their point! The ESC cant read the rotor speed in an auto.

So how does the ESC read rotor speed in an auto. The motor stops right? Or is the motor always coupled to the rotor. I have a one way bearing on mine but I converted a nitro heli to an electric. So the motor uncouples in an auto.

It doesn’t if it’s using the ESC. The motor with an electric also uncouples from the mainshaft because there’s an over-running clutch and the mainshaft drives the tail thru the autorotation gear. In the event the jesus bolt blows the main transmission drive gear is also uncoupled, and with my Synergy’s that have a regular independent bevel gearbox to the drive the tail (that is seperate from the tail boom) the autorotation gear is still coupled and the mainshaft does not come out. On the Align models if the jesus bolt blows the mainshaft comes out and it slams in full negative collective and there’s no saving it.

The best place to measure rpm is on the autorotation gear. With a 10% low speed alarm during autorotation, since you’re pretty busy trying to judge distance, best autorotation speed, and when to flare, using the audible alarm to determine the danger point where you’re going to lose lift is quite handy. Prior to the flare when you’re getting close but no cigar I start using collective pitch to slow the heli until the alarm comes on (at which point I know exactly where I’m at on loosing lift). If I’m close to the judged flare point I’ll continue and let it stall just as it sets down. If I have a ways to go yet, I’ll ease off the collective so the alarms stops and save headspeed until I get to the flare.

So for me, the audible alarm, doing an auto on FPV (which is usually the case when the heli is a long ways out) is the most useful feature. You simply can’t change focus from the FPV screen to the tach on the radio to know where you’re at because it takes 100% concentration on that screen (and some guesswork when the signal drops to snow on the screen at the end) to not wad it up.

Chris, I would like to get an RPM sensor on the autorotation gear also as you suggested, I assume this is the type of sensor you’re referring to?: 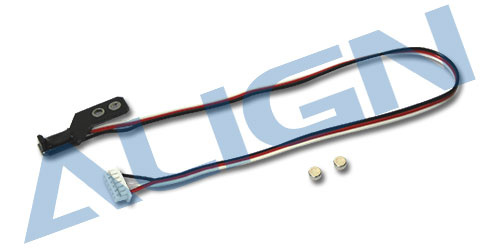 If so, is it possible to pickup the mag pulses from this sensor on a Pixhawk Aux pin the same way I’m picking up the ESC RPM signal wire? I don’t use the Align Microbeast flybarless system, only a Pixhawk.

I don’t know for sure, but I think it should be able to be read by Pixhawk. That looks pretty much the same as the sensors I have except mine have Futaba plugs to plug into the telemetry port on the RC receiver. The sensor is a simple hall effect “switch” that puts out one pulse per revolution of the head. On mine it has to be turning about 125 rpm before it picks it up and recognizes it.

If so, is it possible to pickup the mag pulses from this sensor on a Pixhawk Aux pin the same way I’m picking up the ESC RPM signal wire? I don’t use the Align Microbeast flybarless system, only a Pixhawk.

Jeff,
This is the one I use on my heli’s. But I don’t run them thru Pixhawk. They plug into the telem port on my RC receiver and it “just works”. In the radio’s telemetry menu the rpm sensor shows up when I plug it in, select it to display on screen and it does. Since the Pixhawk has analog inputs I don’t know why it wouldn’t work with Pixhawk but I don’t know the details of configuring it.