I just finished bulding my first hexacopter with APM2.6 and I love the platform.
I started flying waypoint missions and everything works as expected.

What i want to do is fly at the edges of a rectangular area, filming it with an attached camera.
I used ROI to point my copter (and the attached cam) to the middle of the area but i want it to not turn while flying along a side of the area.

My solution was to create ROIs inside the area on the corners and then set a ROI very far away to create the illusion: 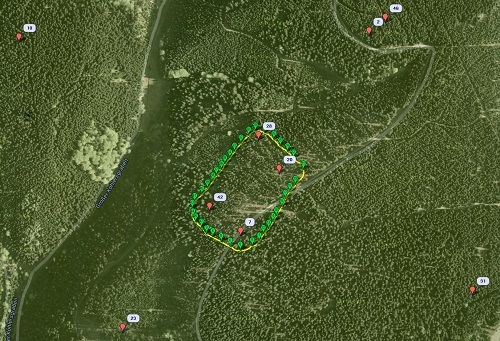 Is there a restriction on how far the ROI can be away?
Is there a better way to keep the copter pointed ~90° related to the side he is flying along ?

Also:
I have a gimbal attached and control its pitch via channel 7. I would like to keep control over that pitch during AUTO mode. Is there a way?

Thanks in advance
Nik

you can switch ROI off again as desired by using the DO_SET_ROI command but with zero for lat/lon and alt.

condition_yaw should be able to set your desired heading rather than trying to get RIO to do it. I haven’t played with that one though.

If i turn ROI of the copter will turn in flight direction again.
Condition Jaw CCW 90° should solve my problem here - thanks for the hint.

Do you have any idea if ROIs cannot be far away ? I had a second flight with a completely different path and a far away ROI. Again the copter seemed to turn to the first set ROI again.