My replacement motors (850KV from 3DR) came with spindles attached and an assortment of hardware for connecting. Most of which was unneeded.

Attaching the props to these as instructed, I used the larger of the two inner “hubs” that came with the propellers. These will screw down onto the threaded part of the spindle, but the lower section is too large for the hubs to fit over.

As a “fix”, I used the large black washer/spacer pieces that came with my motors and tightened the propeller bolts down over these. I was able to tighten these down far enough that they’ve compressed into the washer, but none of these feels very “right” to me.

Any suggestions? I can provide pictures if needed.

And now with pictures! 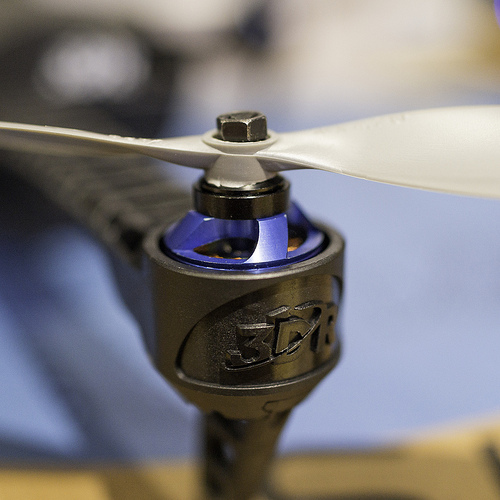 First pic shows the assembled prop on the shaft + spacer. You can see that in order to tighten it down, the edge of the prop “mushrooms” a bit over the beveled part of that spacer. Is this ok? 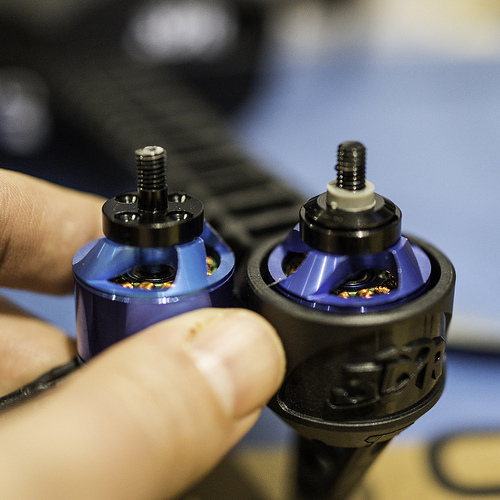 Second shot, you can see the prop shaft on the original motor compared to the shaft with washer and hub from the new props.

Since there weren’t any spacers on the original motors, I’m just wondering if the inner hubs that the props fit over were larger on the original shipped props? The set of replacements were identical to the additional replacement props I ordered (in case the inevitable happens and I break more props).

If this looks reasonable I’ll stop worrying about it. If I’m doing something wrong here, please let me know!

edit: had to reattach photos. they got removed due to an update on my flickr stream.

Put the spacer between the nut and the propeller, see attached picture:

Put the spacer between the nut and the propeller, see attached picture:[/quote]

I’m not sure that’ll really solve the issue I’m having of the inner prop’s ring or hub not fitting down over the shaft all the way. We already have the toothed washer between the nut and the prop itself.

You are right, you need to force the propeller down and the plastic will expand so the next time you remove the propellers and install again will be easier.

Thanks, I’ll give it a try.

just as a followup, was much easier to get the inner rings down over the spindles. Without the spacer, my IRIS seems to be a little smoother. Video yesterday had less jello even though I was flying in higher winds than normal.