My QuadPlane seems to fly well in QSTABILIZE and QLOITER. I haven’t tested the transition or fixed-wing yet. So what’s below is all in VTOL mode.

I tried to load the following mission, hoping to fly it in AUTO so it automatically takes off, waits a few seconds, and then goes to a waypoint. 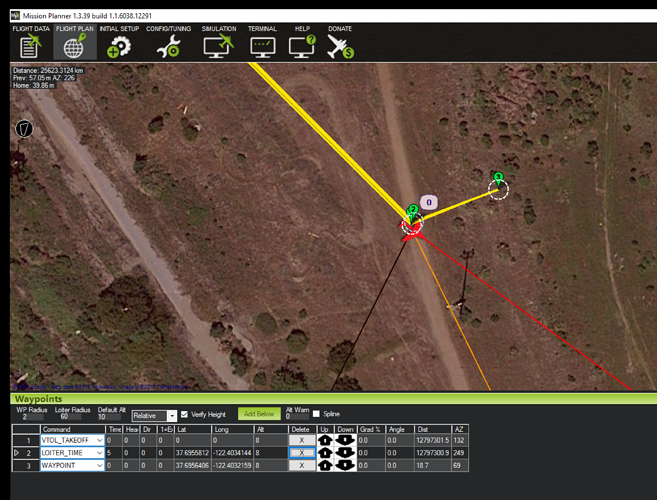 After it successfully took off, it unexpectedly flew North instead of waiting and following its waypoint, West from its take-off location. I had to take it back in QSTABILIZE mode and go South. The trace can be seen here: 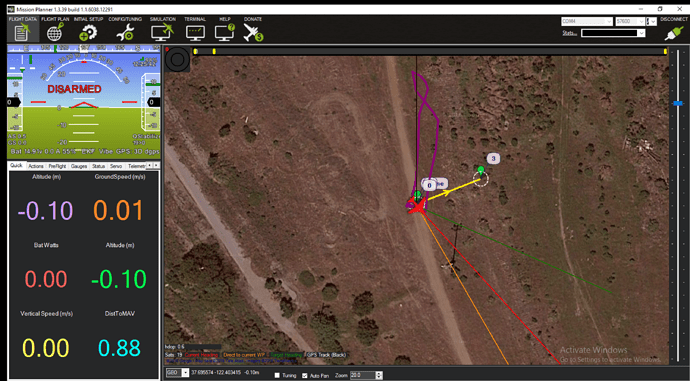 Am I missing something? I should note there was quite a bit of wind but QLOITER works just fine so I’m expecting the aircraft to be able to follow navigation.

After this happened, I decided I was going to test the same mission in APM:Copter and it worked just well. So I’m not sure what is happening with APM:Plane and Q_ENABLE=1.

One strange thing I noticed, as can be seen on the first screenshot with the yellow line going towards the top-left, is MP seems to get confused with the VTOL_TAKEOFF command being at lat,long = 0,0. I’m not sure if this is related to this issue?

I tried again today and observed the same issue. I simplified the mission to just a VTOL_TAKEOFF and a WAYPOINT. After it successfully takes off in AUTO flight mode, it seems to ignore the waypoint and stays up there, drifting with the wind it seems. What I expect the plane to do is move to the waypoint a few meters away in VTOL mode, since I didn’t ask for a transition.

Here’s the mission as planned. 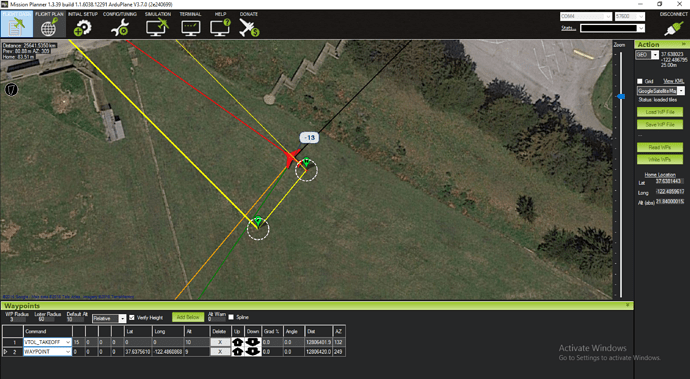 And here’s what can be seen in the flight data tab just after the flight. It basically took off at Home, reached said altitude successfully. But then unexpectedly it started drifting north east at which point I took over in QSTABILIZE and landed it. It never flew to Waypoint #2. 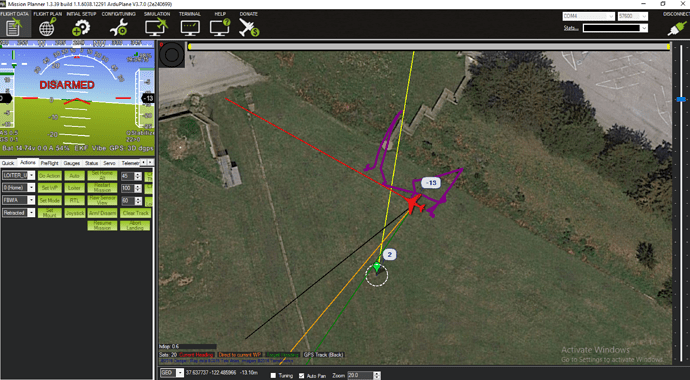 Question for other QuadPlane users: is it possible to fly such a mission in quad/vtol mode only? Or should I conclude that a transition to fixed-wing needs to happen for the QuadPlane FC to be able to navigate to any waypoint?

As mentioned previously, the APM:Copter firmware works totally fine with such waypoint navigation. In APM:Plane QuadPlane, I also tested a VTOL_TAKEOFF + VTOL_LAND (at a different location), which works fine as well and takes the plane to the new landing location. So basically the GPS stuff works fine.

Here’s a link to a BIN log. That particular flight mission is the last one I did, 28 minutes in. https://drive.google.com/open?id=0Bz8Gb5bfp9T2WlJUOE9WWlYxWnc

EDIT: I’ll add a graph for the relevant part.

Did you calibrate your airspeed sensor?

I’m not sure I understand what you said. The vehicle already takes off in quad. Kindly explain why I would need a transition command (supposedly to fixed wing) if all I want is a “quad” mission.

you have to add DO_VTOL_TRANSITION command and set the parameter to 3 after VTOL_TAKEOFF before 1st waypoint.

read more…
you use airspeed sensor?

Yes I have an AS sensor. 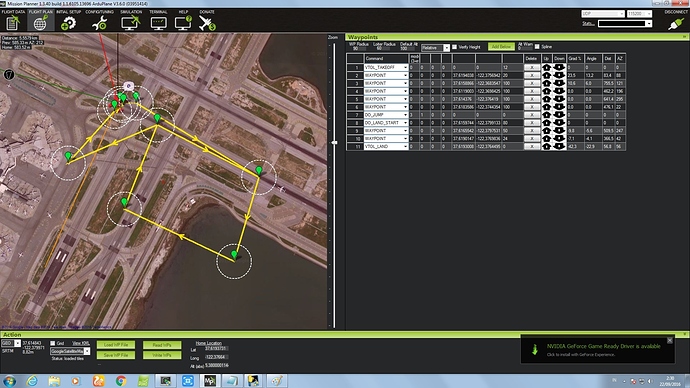 _ aircraft will do a VTOL takeoff, then it will fly to waypoint 1 as a fixed wing aircraft_ 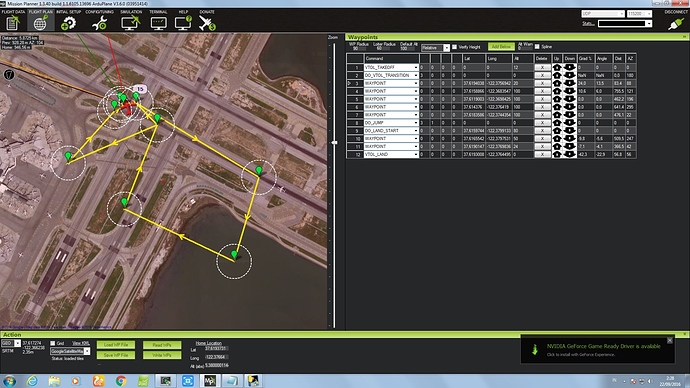 OK thanks for clarifying.

With all due respect Nugroho, can someone from the dev team (@tridge maybe?) confirm that without a DO_VTOL_TRANSITION the aircraft won’t fly as a quad?

Also I should add that a mission with only a VTOL_TAKEOFF and a VTOL_LAND commands (at a different location), the aircraft does fly in quad mode to the landing location.

In other words, at times QuadPlane seems to be a bit like quantum theory – neither in one state (quad) or another (fixed-wing).

With all due respect Nugroho, can someone from the dev team (@tridge maybe?) confirm that without a DO_VTOL_TRANSITION the aircraft won’t fly as a quad?

The way it works is there are mission items (specifically VTOL_TAKEOFF and VTOL_LAND) that are always flown as a multicopter. Normal waypoints are flown as fixed wing unless you do one of two things:

where the waypoint is close (say 30 meters away) from takeoff location? In which mode is the aircraft going to fly to said waypoint, using which propulsion mechanism(s)?

What is the nominal behavior for the following mission and with default parameters:

the default behaviour is to transition to fixed wing mode and fly to the waypoint. If it is only 30m away then (depending on your parameters) it may consider that you have reached the waypoint immediately.

no, the default is to fly waypoints as fixed wing. If you don’t want that and instead want it to default to flying them as a multicopter then set Q_ENABLE=2.

I can confirm this works as explained, thanks for the support.