Position estimates are completely off from what was expected and observed. Possible brownout too. Culminated in a crash. RTL, Land didn't work

I tried seeking advice and suggestions on other forums but got no help. I am going to copy paste some parts from my Reddit post, so pardon me for that.

I have been experiencing some crashes that happen suddenly out of the blue. My Quadcopter suddenly starts swerving to one direction, and remote inputs have very limited effect, though they seem to be able to change the direction very slightly. It generally ends with my quad crashing into the ground, and changing flight modes has no effects. Using a FlySky i6 transmitter with modded firmware, but now moving onto Radiomaster TX12.

I don’t have logs corresponding to the old crashes, so I am just going to describe the recent crash I am trying to get to the bottom of.

Since I hadn’t had any crashes in some days, I was flying high. I tried some fast turns and circles in Alt Hold, and then changed to circle flight mode. I exited Circle in “Land” mode, lost some altitude while moving ahead and then proceeded to move straight with AltHold. Suddenly, the quad started moving away from me, and I thought it must be the wind. But then it didn’t stop moving when I tried with the transmitter, and tilted to one side. It went really fast, and before I knew it, it was racing away. I tried to switch to RTL, but that didn’t work. I tried Land, but it also didn’t seem to work (Logs show that the mode was changed but it didn’t Land).

It raced to something like 300 metres away. Disarming didn’t cross my mind, since I didn’t even have time to consider it, and it might have caused it to fall over some person. I was lucky since some guys who were passing by had seen it go vroom… It had crashed in a field. I have broken just one prop, bent one, and pulled a GPS connecter wire, which looks like a miracle to me. The LiPo was pulled off and an ESC had detached connectors from the PDB. Actually I feel very grateful there wasn’t any injury to someone or some serious damage to my quad.

I know the vibrations are high in the z direction (and I am trying to reduce those vibrations), but that doesn’t explain all the issues.

There’s a GPS glitch error, but EKF failsafe is set to Land too, so I don’t think that’s the issue.

Also, the position estimates according to the map are completely off.

According to the logs, it had rolled towards the right, but that is completely untrue. I don’t know how that data is there when nothing like that ever happened. 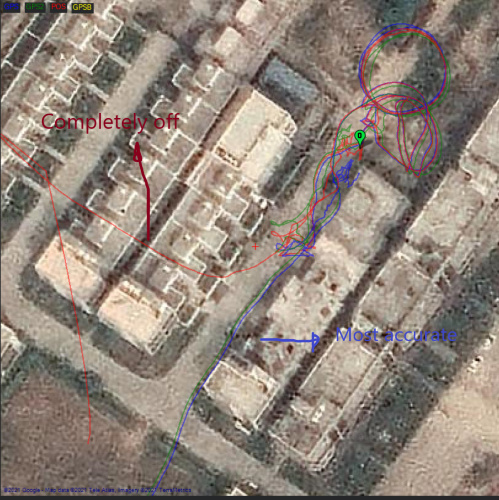 Also, I don’t see a reason why the logs end in the middle of the field. The rotors were clearly spinning quite fast till it crashed. If that hadn’t happened, the quad won’t have covered that much distance, I think.

Any help is appreciated.

I thought I would be pointed in some direction here, but no responses. Please let me know what should I be doing, or at least what is wrong with my post. I am just a hobbyist, and if I can’t resolve the issues on my own, it is just the end of the hobby for me, at least in the current form. Maybe I will have to try with PX4 if I can’t get any support for Ardupilot…

You need to solve the Z vibe problem first. And you need to tune the copter according to the “ArduCopter tuning process instructions” wiki page. After that half of your problems will be gone. And we can help you with the rest.

Do NOT underestimate the Z vibe problems

Be a bit more concise with a summary of the problem. As @amilcarlucas says regarding vibes and basic tuning parameters. A quick look at your log does show high Z-vibes, tuning is poor and it’s a bit underpowered/overweight. You need battery voltage logging.

Thanks @amilcarlucas I am trying to solve the Vibration problems, and before this, Vibrations in X and Y directions were really high too. New motors and props did the trick, along with fixing some loose screws.
I am trying to see whether using multiple layers of foam tape rather than the “vibration/shock absorber board” I am using helps me resolve this issue.
And thanks for the tuning suggestion! I definitely overlooked it. Going to try it out once I get some replacements I am waiting for.
If we assume that the position estimate issues were caused solely by the vibrations, that still doesn’t explain the apparent brownout and complete loss of control at the end. What can be the reason for that?

@dkemxr Thanks a lot for the reply. I will shorten the post ASAP. I just realized it is poorly written and overly descriptive with a lot of irrelevant details.

I am looking at Z vibes and tuning now, but I am not sure about the underpowered/overweight part. I am flying a 1.5Kg quad (approx weight with battery) with maximum 3.8kg of Thrust. Was trying to get the 2 : 1 thrust ratio people thought was ideal… Do I need more powerful motors? The frame I am using is quite heavy on its own and I still don’t have a camera on board as of yet.

Also, any ideas about why the logs seem to end there, followed by a complete loss of control and crash?

Edit: This is embarrassing, but I can’t find a way to edit the original post…

Vibration caused a Vibration Compensation Failsafe, after that flight control will be poor. There were also several GPS Glitches and resulting EKF errors. I don’t know why the log ended as it did. Voltage and current logging would help. You need voltage logging anyway for some of the Initial Tuning parameters you failed to set. So fix the vibration levels (balance props, isolate the FC), enable voltage monitoring and perform the Initial Tuning steps.

Your average motor output is ~1700us at it’s current power and weight. This should be closer to 1500us. So you cannot add any additional; weight and should decrease it. Or move to a higher voltage battery, larger props if possible.

@dkemxr Thanks again for the reply.

If it makes any difference, it was flying a bit high, in a strong wind, and was flying a bit aggressively, though not definitely stunts kind of aggressive. I am thinking of going 4S instead of 3S, but am a bit hesitant since that would essentially mean replacing all my LiPos. The shape of this frame doesn’t leave any space for larger props.

I think I have found a major cause for the vibrations. Just noticed that my motor shaft and some of my prop “holes” weren’t exactly the same size, causing a very, very slightly loose mounting of props. Don’t know why I didn’t notice that my replacement props weren’t really compatible with my motors.