I have been tuning and tested the wing for some time now, and it is flying fine in manual, stabilise, guided modes and auto, except cruise mode.
There are some height variations when flying in cruise mode (without pitch stick input) - maybe 15-20 meters.
Below is a link to some log files from the second latest flight, whitch ended in a “hard landing” while in cruise mode. Not much “no pitch stick input” in this flight because I tried to maintain constant height. No damage to the plane, and I had another flight a couple of minutes later with similar behaviour - except the hard landing

Some of my own observations:

I hope someone can take a look at the log, maybe there is something obvious I am missing. Thank you in advance!

I’m sorry I cannot help, but your video is simply great .
How did you did the overlay with the flight track ?

Thanks!
I have added some information in the description field on YouTube. As this is off topic, please go there and have a look - hope it helps.

I don’t know if I’ve had the same problem as you, but have a look at

. macmerlin,
Thank you for taking a look and pointing me to the GitHub site. I have not been aware of that discussion - now I shall take a close look at your thread and see what I can learn from it. I noted that your setup is different from mine in many ways - different FW versions, different plane and me lacking airspeed sensor.

I shall also take your advice to make another AutoTune later when all is settled down.
Because:
Waiting for a response here, I have since installed Arduplane V3.8.0 Beta5, hoping that it should solve my cruise problem. In the prosess looking back at older logs I could see SAT count of max. 8. Then I discovered I had been cheated with a Neo 6H GPS instead of a Neo M8N. “Cannibalized” another plane for a M9N and then realised that it was a fake/counterfeit version - still getting only 5-8 satellites. Tried to update the GPS to latest 3.01 FW, but impossible since they used ROM memory instead of flash. Looking for a genuine GPS receiver now.

I also want to take a look at the Cruise and Auto speed - burning a lot of fuel at 16m/s when 12-13m/s is plenty for this plane (stall speed 10m/s). It looks like the only parameter to try is TRIM_THROTTLE, it’s now down to 40%…

I am about to try a new test flight when everything is ready - still some work to do with setups and calibrations. Shall report back

First, about your GPS, it should not affect your up and down issue that much. GPS is not meant to be very reliable for altitude, and the barometer should be mostly used instead. As for your GPS, indeed most cheap ones you find today are counterfeit ones that aren’t flashable, and cost half the price of the real ones.
That does not mean that it’s absolutely the reason for your problems, but can’t hurt to try and swap that part if you wish.

GPS
I know it may be overkill, but I wanted something better for long and possibly safer missions - even if the 6H is performing well for my other planes. I meant to say, I did not change it because of altitude control and my Cruise issues. In my parameter settings the BARO is still 100% in control of altitude.

Airspeed
Changing MIN_GNDSPD_CM and TRIM_ARSPD_CM does not do anything for me. At the moment this what I have:
MIN_GNDSPD_CM=0 Minimum ground speed in cm/s when under airspeed control. This has worked for my other planes, and I think it is the default value. May change it to 1200?
TRIM_ARSPD_CM=1200 (cm/s). “Airspeed in cm/s to aim for when airspeed is enabled in auto mode. This is a calibrated (apparent) airspeed.” -Tried different values - apparently no change in Auto speed (perhaps due to no airspeed sensor?).
THROTTLE_NUDGE=1 (enabled). _When enabled, this uses the throttle input in auto-throttle modes to ‘nudge’ the throttle or airspeed to higher or lower values. When you have an airspeed sensor the nudge affects the target airspeed, so that throttle inputs above 50% will increase the target airspeed from TRIMARSPD_CM up to a maximum of ARSPD_FBW_MAX. When no airspeed sensor is enabled the throttle nudge will push up the target throttle for throttle inputs above 50%.

I have based my testing and tuning on this link: http://ardupilot.org/plane/docs/tecs-total-energy-control-system-for-speed-height-tuning-guide.html. Also from what I have learnt from other discussions here, most of the airspeed parameters are dependent on a calibrated airspeed sensor. May be some language barrier, but I don’t fully understand the term “calibrated (apparent) airspeed”, is it an airspeed sensor value or a calculated air speed (and heading) based on GPS and compass?

I was carried away writing all this in this thread, I should have started a new one…

— Anyway, thanks for your input!

So, this was an unrelated tip but MIN_GNDSPD_CM makes sure RTL is not flying 10m/s against a 10m/s wind, with 0 ground speed and kill your batteries going nowhere while you have lost video to take over in manual.
Your question on whether an actual airspeed sensor is needed for those, I don’t quite remember to be honest, probably for some yet, but not the GNDSPD one obviously which is GPS based, and THROTTLE_NUDGE allows you to push an auto mode to fly faster if it’s not making enough progress in ground speed.

MIN_GNDSPD_CM makes sure RTL is not flying 10m/s against a 10m/s wind, with 0 ground speed and kill your batteries going nowhere while you have lost video to take over in manual.

Thanks again, now I understand MIN_GNDSPD_CM! I shall change it to some other appropriate value.
-Jan

Now for the interesting part - the test flight.

My issues with Cruise mode are gone!
After some small trim adjustment in a couple of test flights, yesterday I performed a 3.rd test flight with Manual, Stabilize, Cruise and Auto mode.
A bit windy, but no problems keeping the plane stable in windspeeds between 3-4m/s (7-9MPH). The Mission went well also, very little deviation from waypoints and altitude, in spite of the wind. 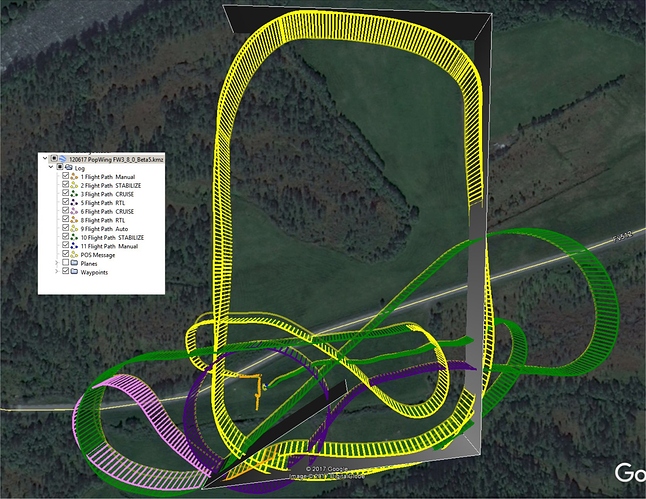 I cannot see any problems in the log. I know it is a lot to ask for (time consuming), but if anyone wants to have a look - here is a link to Dropbox: https://www.dropbox.com/sh/3e2ow07lgy4yw99/AACPExASmAj5pZ3JAgibKp-ka?dl=0

And in case anyone wants to watch the video with DashWare instruments, here it is:
Please note the excellent wind speed & direction estimate from the Flight Controller/Firmware - it locked in only 10 seconds after takeoff! Thank you developers!