Hi Friends, I’m hoping someone has some clues for me as to what is happening…

Crash 1)
Anxious to have the frame tuned, maiden was hand-launched in AutoTune. About 1min:21s into flight attempting RIGHT 180* bank, PIXHAWK ROLLS INVERTED TO THE LEFT. After momentary loss of control and not enough time to correct, Plane is in trees and cacti. 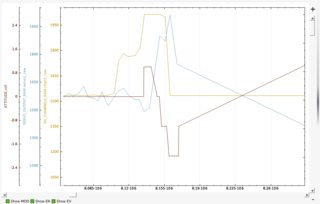 Crash 2) (Day after)
Fixed bent wing and hand-launched in Stabilize. After a minute of successful Stabilize flight, AutoTune was engaged. After about a minute of AutoTuning (again turning around 180*, but to left) PIXHAWK ROLLS INVERTED TO THE LEFT AGAIN. Anticipating this unknown action, I switched back to Stabilize. Control was returned, but again not enough time to recover. Trees and Cacti. 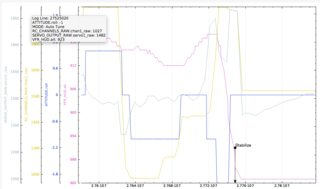 VIDEO
I stitched the two crashes together in one video. This helps show these un-commanded barrel rolls.
[youtube]https://www.youtube.com/watch?v=pCJcyKvEPWA[/youtube]

Analysis
[ol][li]I know the AutoTune wiki says to switch out if flight becomes uncontrollable. But this CANNOT be what they’re referring to… [/li]
[li]I have poured over the .tlogs for many more hours than I care to admit. (No success downloading datafashes)[/li]
[li]As you can see in the graphs/video, I am NOT commanding these hard left turns. Nor is Pixhawk. So why is it happening???[/li]
[li]I cannot find evidence from Google that this is happening to others.[/li]
[li]Notice Attitude.roll is going in the opposite direction as ch1raw and servo1out???[/li]
[li]sys_status.load is >100 only when in autotune mode. Is this normal? Max 115.[/li][/ol]

I am at a loss.
I hope someone can catch something I’m missing. It’s gotta be something silly…
Thank you so much in advance for any input!!!

I found this discussion about a crash that happened in a similar fashion.

Is it possible my servos are freezing up in somesort full deflection?? Cheap servos that came with the kit?

I don’t know the characteristics of you’re plane but were you flying fast enough? Or more accurately, did you have enough air speed?

If arduplane get’s into a tip stall it really can’t cope and the end result is spiraling hard straight down into the ground. I speak from explosive experience

Hi. The dataflash logs would be helpful. Any chance you can pull the SDCard from the pixhawk and try and transfer them that way?

I am having a similar issue with autotune. When enabled it will to a hard 180 roll. The first few times I reverted to manual, then I got more altitude and switched to autotune, 180 roll again and was flying inverted. continues to fly straight and level inverted. Any help would be appreciated. Thanks.