Hello everyone. I’m new to this forum, and relatively new to the pixhawk 2.1. I have my 2.1 installed in an F550 Hexacopter. Once I had everything installed, and got the motors all in the right directions and order, I tried to take it out for a basic flight. Now this unit used to have an eagletree vector in it. I decided to change to the Pixhawk 2.1

Here is a sample video of what it’s doing. I’ve posted in other forums, but no one can seem to give me an answer at all as to why this is happening.

Any ideas? Thanks in advance

Pat;
I know you have checked, but Triple check that props are all facing up, and that motor order is correct . Motor 1 goes to pin 1 on FC, Mot 2 to pin 2. etc. Take a look at the WIKI.

Can you lift off ground or did you stop when you saw the shaking?

Did you try reloading the software on the FC? Sometimes a bad download happens and things go goofy.

I had one that had did that , but it was after I had been playing with the PID’s.
Joe

hi, to me it also looks like the motors start at different times. have you tried calibrating the ESCs?

Thanks everyone for the responses so far. So here are some thoughts. And please chime in if you think any of these would be a problem.

I had a problem originally with wiring the motors. So when I tried to fly it, it immediately flipped on it’s lid. Not thinking anything at the moment, I tried to take off again. So that was crash number 2. It ended up breaking 5 of the 6 props, and broke 1 front motor. So I replaced all the props, and added a new motor. One thing I noticed after this… Three of the motors seem to be loose at the base. NOT like loose as in screws that hold it down lose, but loose where the lower bearing goes into the base. So if you grab the motor body it wobbles a little bit.

Third thing. The Esc’s I’m using are the stock ones that came with the F550. I can’t remember if it was the 305 series or not. But with this being said, I do NOT believe you can calibrate these ESC’s. I tried to run the calibration, and it seemed to do something, but I’m not sure if it did. I just read somewhere that you cannot calibrate them… Ideas on this one?

So… I have a set of sunnysky V2216 900KV motors that I have all ready to go to replace the stock DJI ones. I will be using these in combination with HQ props 10X4.5. I will pull the top plate off and find a better way to mount the antenna so that the nuts do not touch the Pixhawk. I will reinstall the firmware and recallibrate everything.

Does any of this sound like it could cause the problem as seen in the video?

Thanks for the responses again.

I’m going to be as calm as possible about this. So I spent all afternoon today rebuilding things that I thought could be a problem. New motors, new props, EVERYTHING. Double and triple checked the prop orientation. Reisolated the pixhawk so that it wasn’t touching anything. Recalibrate, etc…

Brought it outside, started the blades no wobble. Gave it a tiny bit of throttle, the shaking started, it launched into the air, and crashed back down. So I now have 5 broken blades, 2 broken arms on my hex, 2 broken motors, and a broken carbon fiber landing gear leg.

Oh yeah, and to boot, the pixhawk is now in a million pieces because the best feeling in the world was taking the hammer to it!

So… That solved the question I’ve been asking about which was better. The pixhawk or vector? Well guess which I will take any time of the day.

My old saying still holds true for me. GARBAGE IN GARBAGE OUT. So much time and money were wasted on this POS. I should have listened to the people telling me to stay with the vector.

You were aware that DJI motor layout and Arducopter motor layout are entirely different ? It’s not a straight swap.That looked like the wrong motor rotation to me.

The wobbly motor bells are due to cheap bearings being damaged during testing.

Screws resting against the flight controller is (could be) a problem.

I should have listened to the people telling me to stay with the vector.

No.You should learn stuff for yourself.Not repeat stuff parrot fashion.We’ve all made mistakes and blamed inanimate objects.Doesn’t mean they were faulty.User error is usually to blame and I speak from experience.

And the one thing you need a sack full off to build a copter successfully is patience.

I was told that if the motors were wired correctly, that when you do the motor test motor a would be -X- top right and go clockwise b,c,d,e,f. Is this not correct?

They also need to spin the correct way when tested.Were you working from this ?

DJI Opto escs do not acccept or need calibration.

Yes Sir. That is the exact chart I used.

Now under the stabilize mode doc from ardupilot.org, one of the common problems is:

“Copter wobbles on roll or pitch axis. This usually means the Rate P values are incorrect. See tuning section above for some hints as to how to adjust these gains.”

Maybe this is something I need to look into.

A newly built copter should actually fly ok on the stock loadout PIDs.I’ve never had one be uncontrolable.

I suppose it’s a bit late to ask for a log ? That’s how most problems get identified after the event.

Must admit I got nearly as frustrated as you with my Pixhawk 2.1 and very nearly meted out the same treatment.I sent it back to the factory for tests instead.Haven’t seen it since.I don’t miss it.

I believe i may still be able to get the log since it has enough left. I know there is a huge learning curve between the vector and pixhawk. No doubt. I also know that part of that learning curve is crashes.

Here is a question I have. Do you have a link where I could get a pixhawk other than the 2.1? I love all the options you have. The capabilities are endless it seems.

There are loads of methods of going Pixhawk.You probably won’t go far wrong with a cheap Pixhawk 2.4.8.Not the highest quality components but they generally work.I’ve got three fitted to low value copters.When things get a bit more serious I tend to fit CUAV flight controllers myself as I find them well made and reliable (Pixhack V3 is my personal current choice).There are quite a few choices in between.

Pay attention to version numbers.They matter.The Pixhack V3 for instance has much more advanced sensors than a Pixhack 2.83 despite both being great performers.I’d go with basic with that frame.Lots of fun the Pix 2.4.8s without breaking the bank.

The logs are stored on the sdcard.

Thanks for that information. I know the vector was a great unit. I went with the pixhawk because I like all of the capabilities. I may have gotten a bad 2.1 unit.

What about this one here? 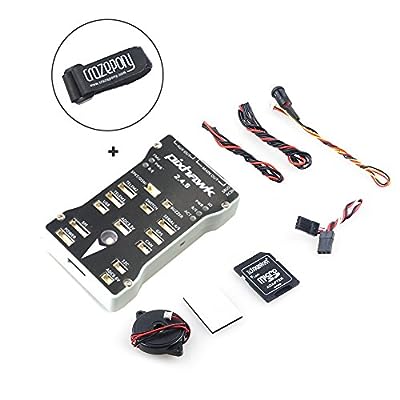 Can I use the here gps module with it? And the power brick from my 2.1?

Yes but you will need to either get a Pixhawk 1 lead for it or hack your own lead together.Pixhawk 2.1 lead will not fit a stock Pixhawk.You would also need to breakout the safety switch wires which are included in the HERE GPS.I’ve not done that yet (although I have the HERE unit from my Pix 2.1 in the drawer).

Ok. So the crazepony one is ok. I did see a diagram for using a here gps with a px4. Now as for powering it. Can you use the same power brick from the 2.1?

You can but only with the same sort of hacking.Most stuff can be used with the early Pixhawk.It’s only the connectors that have changed.But along with that the pinouts are or maybe different so you have to pay close attention to each and every wire and where it goes to and where it came from.

It keeps me off the streets this sort of stuff.

that looks like PIDS are WAAAYYY offf! way too high!
ptegler

That’s what I was starting to wonder. But bb I thought the pods should have been close enough to at least hover.