I’m trying to setup a 3DR Video Telemetry kit and a 3DR Wireless Data Link to an Ardupilot 2.6. Everything worked great until I tried to get both the video and the telemetry working at the same time. It looks like 3DR upgraded the Radios to a new type of connector which doesn’t work with the OSD/Radio splitter. Here’s a picture of what I’m talking about: 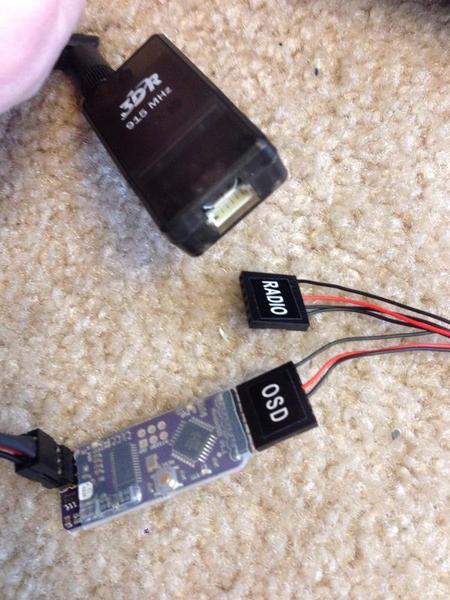 Can anyone offer any suggestions as to how I would be able to get both of these working at the same time? Perhaps there’s a converter cable or something?

@Rocketman574,
I took a look at the 3DR Store and it looks like they have overlooked the need for a different cable on the radio end of the Y cable when using the new telemetry radio configuration.
If you are handy with a soldering iron you could make an adapter to go from the inline telemetry connector to the radio connector: http://copter.ardupilot.com/wiki/common-using-the-3dr-radio-for-telemetry-with-apm-and-px4/#3DR_Radio_Version_2 and here: http://copter.ardupilot.com/wiki/common-using-the-3dr-radio-for-telemetry-with-apm-and-px4/#For_APM_20
I have alerted 3DR Engineering to your issue.
Regards,
TCIII Developer

From Lorenzo (Production)
We are including an updated cable already. We will also send a cable for previous orders (from when we started shipping the new radios) that shipped before we had these in.

Awesome, I appreciate the quick response from TCIII and Lorenzo.

Who can I contact about getting this new cable sent to me? I ordered directly from 3DR and can provide all the information from my order.

Please send an email to help@3drobotics.com with your order number and the problem description, also include the picture you’ve attached on this post, this will be helpful.