Not the way I wanted to end the flight

I think I know the cause of this crash.
IT appears there are to many vibrations and it caused Vibration compensation to kick in. Which I know doesn’t hold altitude properly and it struck the ground. I was heading in to land and wasn’t high enough nor was I quick enough to pull up and stop the crash.
I swear that field I fly at is jinxed. I have never had this many crashes in one year. EVER.
If someone would be so kind as to check the log and give me a second opinion I would appreciate it.

One odd item in the log is this sudden pitch input right when the compensation kicked in. Not sure if this is me or something else. Just odd how stepped it is. IT could be some strange artifact from drone plotter becuase I can’t get the same results in Mission Planner. 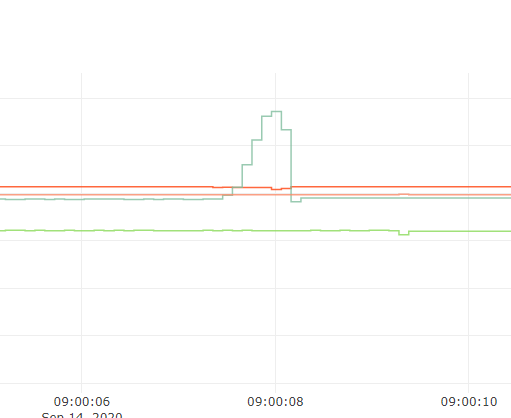 I think the question is why did the vibration compensation kick in?

I cant see any particular events from the IMU’s to trigger it.

The only thing I could find in the logs that coincided with the subways:29 was a spike in the NKF4:SS Filter solution status.

This is beyond my mere analysis and needs a dev to look at it.

@mboland
Hi Mike. I agree with you. Why did it occur. This is the second Vibration Compensation incident I have had. It’s occurred on both of my recent 4.0.3 machines and in each case resulted in a major crash. I could find no explanation for either. \The vibrations at the time of the compensation kicking in was high but not so high that it should have tripped the Failsafe.
May I ask what Subway.29 is. Never heard of that.
So its clear to me then that the Vibration Compensation was the cause of the crash. Just whats outstanding is why did it kick in.

I am considering disabling it as it’s proven to be a threat to my machines. That said it will be months before my Hexa is repaired. It took a pretty hard hit to the ground.
I have parts broken I never expected to see broken.

I know the vibes are high on the hexa…Folding props are a problem to balance…but I don’t see anything in the log that would trip this.

I don’t know any dev’s so not sure who to ask for help.
@Andrew_Tridgell
@andyp1per
@rmackay9

This is the second Vibration Compensation incident I have had

I disable it. At least on the craft with higher than desired vibes.

hahaha I will…but it’s in bits now so long time before the change will take affect.

As mentioned on the other thread, the vibration compensation has these heuristics:

And in the log, we do see these thresholds being crossed:

Here are the vibration levels which are a little high (>30m/s/s is the grey zone) but not terrible. The crash occurs around 119,000.

Thanks @rmackay9
This is what I thought had happened. I didn’t know that the rd line to cross was 30M/s/s. I am working to drive down the vibes…that said, its in bits now so no vibrations in the near future.
I will leave the compensation on.
The quad that crashed I got the vibes down to an average of 6 with a peak of around 23…still higher then i want but better then before

Looking good. The vibes are certainly better. The vibration levels before are not terrible although they are also in the Y axis which is unusual. Normally it’s the Z-axis that is the problem and the 30m/s/s guidelines is mostly from our experiences with Z-axis vibration levels… i.e. maybe the guideline needs to be lower if we’re talking about X or Y axis vibes.

ya weird. I can’t seem to beat down the Y axis. I just can’t for the life of me figure out the cause.
On the quad I set the Kyosho Gel strips farther out on each corner…Will try that on the rebuild of the hex…but apart from that I have no clue.
Thank yo for your help. You proved my theory. I just need to get her rebuilt.

Wa hooo my new top plate arrived today. I am going to rebuild the both the quad and the hexa now. Redundant power. Integrated osd…Video switching.
Reduce the wiring. Improve the connections.
Anything to improve the chances I don’t have any more crashes.

Looks great!
Good luck with your rebuild, I hope you are soon back in the air.
Was flying this weekend and unfortunately I again had a few GPS glitches. Have become used to it and switching to Stabilize mode before it gets crazy have so far cured it.
I’m also having high Y vibration and can’t really figure out why, could it be from props that reaches the fc from the side?

What more GPS Glitches…what the heck. I must admit I have not had one since adding the second GPS to the mix. That said I do have new GPS’s on order. I too was quickly moving to Stab to get her under control. But my concern has always been RTL.
As for the Y axis vibration. I have the same thing. Makes no sense to me. If it was propeller related it should be the same in both directions. I just can’t figure it out.

We shall see what happens with the new devices… Good Luck man.

Yeah it was very odd. I have no idea what happened. Other then it hit the ground and broke up.
What graphing tool is that. Pretty cool.

Wow the 3D plotting is kind of really awesome

Thanks Shawn
Hope all is well with you and yours. Thanks for the link. It’s awesome. Love the overlaying of data it has.

I’m bummed your still getting glitches.

Hi, I got some new ideas today, looks like I have down the road introduced a lot of noise into the compass. Didn’t realize until today how to see it in the logs. Both read another thread and got answer on a request for help. If you plot the total sum of your compass signal it should be constant in a perfect, noise free world. Looking through some old logs I can see that since spring something has happened with my compass signal as it now contains a lot of noise that I didn’t have before. Will check if it’s the supply or just that the GPS is wobbling around.
As you have had similar issues I checked your last log here and Compass2 seems to have issues in your case.
The way to check it is to add the formula below using the plot viewer, it should be a straight line
Sqrt(MAG.MagX** 2+MAG.MagY** 2+MAG.MagZ**2) 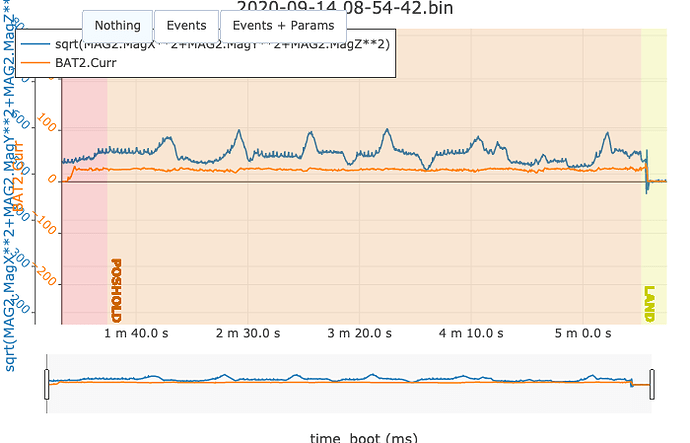 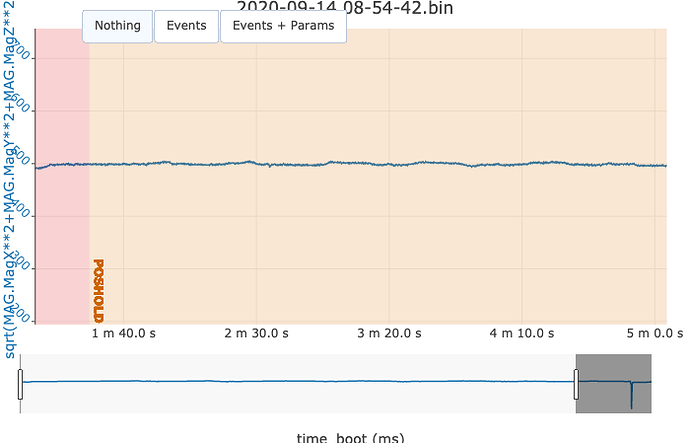 This is your compass and compass2. If you can select I think the one labeled MAG will be the only compass needed.