Unfortunately today I pretty much destroyed my hexa in a flyaway that I am struggling to understand from the logs. The compass on the Pixhawk is bad after the crash and I suspect I had a bad contact on the GPS i2c connector. The drone flied well and landed 2 times, one in RTL, in two short tests of a few minutes, then on a third take off I went a bit higher in alt and noted some strange twitching (could not see well as the Sun was in the same angle as the drone), decided to lower the alt (and probably land immediately after) but the drone went crazy on a side, tried to save but roll and pitch could not do a lot, it kept in the same direction and it crashed into a high wall, falled down from a fourth floor height and “landed” on concrete. Thanks a lot for your help.

your VCC voltage is bad, average 4.85v for the last flight, and 4.73v was the lowest, that is dangerously near the 4.6v limit. (but not a reason for this crash)

I cant see a esc/motor/prop failure because you have switched off RCOUT logging for some reason.
in any case, you can see how ThO goes from about 50% average to 100% as the trouble starts, the current peaks at 97A (twice normal) … about when it happens, there is a high positive Z acceleration of 51m/s/s

given the data I see, I would guess something (motor/arm) got loose midair, or some other mechanical failure. 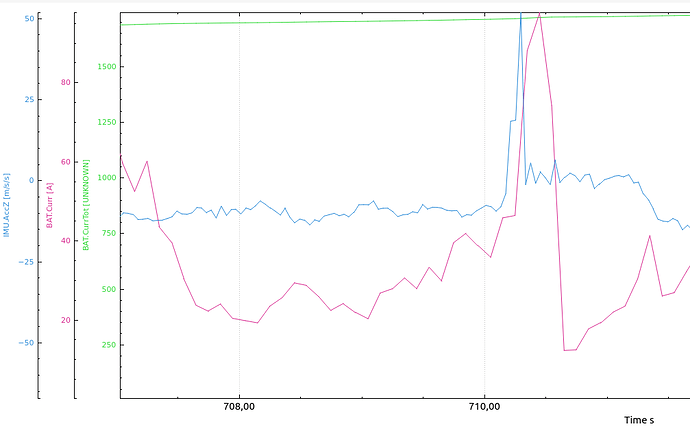 A battery was sliding down from the support in a video I did just minutes before the flyaway. I had two so the drone would keep flying but I want to ask if the sliding and the unbalance caused by it hanging lose could have cause that behaviour? Bat was 7000mah 4s around 530 grams. I had the machine in view until the last moment and I am sure everything was in one piece until it hit hard, what I can not know is lose screws or electrical esc/motor failure but yeah, the sound when all began was a bit different, with high motor accel which could explain the Amps jump and maybe an unsuccessfull intent of stabilization recovery by the FC. I cannot see by the logs if it lost GPS as I suspect, just before the crash. The GPS unit is faulty now after, it is not powered by at all by plugging into FC. Also, I got no idea if I could still fly this Pixhawk or throw it at the garbage and buy a new one just to stay on the safe side (it looks and acts OK but who knows …)