Hello, I have a problem with this drone. It s a quadcopter with a 20 inch propeller. In Stabilize mode, it s working ok, in Alt Hold mode it s okay, but in Loiter mode, I have some oscillations, especially if the wind blows a little. I also attach the bin file.

Can somebody help me? It s a large drone and I don t want to invoke AutoTune…I want to manual Tune. Can somebody with experience help me? Thank you very much

Steps I would take based on the current configuration:
Update the firmware to current Stable and make sure EK3 is enabled (which FC is this?)
Configure all of the Parameters in the Initial Parameter Setup screen of Mission Planner.
Set INS_ACCEL_FILTER to 10Hz.
Set INS_LOG_BAT_MASK to 1 to prepare for configuration of the Dynamic Notch filter.
Make a short hover flight in AltHold to establish MOT_THST_HOVER.
Review the log and see if there is oscillation in the; RC outputs or the Rate outputs (there is a lot of oscillation now).
Set These based on the tuning guide and MOT_THST_HOVER:
PSC_ACCZ_I
PSC_ACCZ_P
Make another flight and see if the oscillation is gone. If not reduce the Rate P&I values and try again.
When the oscillation is gone then configure the Dynamic Notch Filter.
Now you are ready to start manual tuning…

A couple graphs showing where you are now (not great):

I changed all parameters as you said. The flight was better, but was a problem at the final. I attach the bin file on the cloud with the name after changes. The flight controller is a NAVIO2 and the drone have 4 Scorpion SII-4035-450KV engines (with 20x5.5 propellers) coupled to 4 Scorpion Tribunus II 06-120A ESC SBEC. Also, the battery is 6S and the total mass of the drone is 16 Kg. Now I think I have a problem with the motor C2, because the copper color is changed…

You didn’t update the firmware and switch to EK3. The oscillation is reduced but still present.

You also have a significant Yaw bias on this craft. The CCW motors are being commanded much higher than the CW motors. Typically from Twisted arms or motor mounts or frame distortion. In any case the props are not level.

I did not update the firmware because I had a problem with the internet where I had the drone. I will update it tomorrow. I also texted the engine manufacturer to ask about that copper color change from the coils. I’m afraid that engine can’t fly anymore. I’ll wait for an answer and in case he says it’s okay, I’ll take another test tomorrow. I will also activate EK3 (I forgot it, I’m sorry). Do you want me to post the video with the flight?

Do you want me to post the video with the flight?

No, video not required. Perhaps just a photo of the craft so we can see what you have. There are FFT results but I would hesitate to act on them and set the Notch filter now before updating the firmware. It looks like there are 2 closely coupled modes and harmonics of them. A bit out of the ordinary: 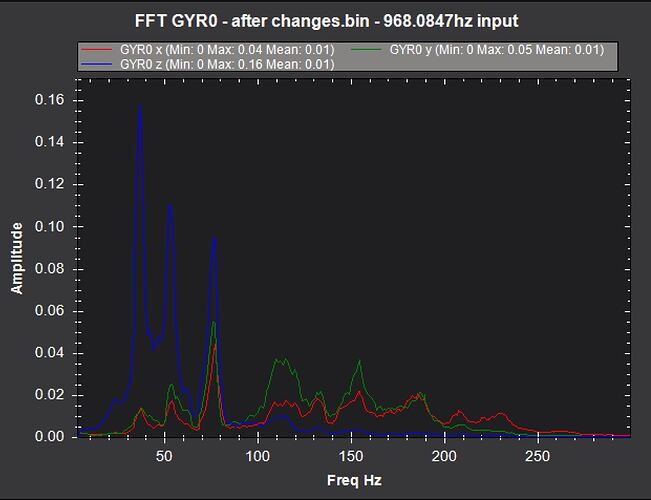 That’s it, I uploaded 2 images with the drone also in that cloud. That difference between the CW and CCW engines I think is due to the fact that throughout the flight, the right-rear wing was turned as in the picture of drone 2, thus creating a torque of rotation CCW, and the engines 1 and 2 ( CCW motors) increased speed to compensate for this turning moment. Also, the flight was ok, but at one point I think the amperage increased above the value of 80 A for the left-rear engine, and I set the ESCs to reach the value of 80 A to reduce my speed to 75% to protect the engine. Therefore, in the end, the oscillation that led to the drone landing was on the diagonal of the CCW engines. But now … unfortunately I don’t know if I have the left-rear motor affected … The normal motor figure is the winding from a normal motor, and the suspected motor figure is with the winding from the left-rear motor which is motor 2 in the file .bin.

I don’t know what I’m looking at. The frame looks very compliant and what are those big blue vanes for? The ESC’s are hanging by wires? Not sure what you have there…

It s a new concept of quadcopter where I put 4 wings. That big blue vanes are wings to bring a lift force to the forward movement thus reducing engine power and gaining autonomy