Landing in FBWA Mode Throttle will not cut

Last year about mid summer, when landing my fixed wings which are all pushers(I have 3), when throttling down all the way in FBWA mode, I discovered the throttle would not cut, but would maintain about 10 or 15% power, thus resulting in much higher landing speeds, and worst of all, the prop is still spinning upon landing instead of settling parallel to the wings before touch down, and all of my fixed-wings have landing skids, not landing gear, so if the propeller is not parallel to the wing on landing, it breaks blades about 50% of the time. Not sure which version of firmware the change occurred that’s causing this problem, but I know, when I flew early spring 2016, this issue was not happening, but around mid to late summer 2016 started to notice it. Does anyone have an idea which parameter might be causing this? During pre-flight before I launch, I always check throttle response after arming, and it is always normal, meaning motor throttles up given percent based on stick input, and cuts 100% after throttling all the way down to cutoff. What seems to happen though, after I launch and am flying for a while, throttle will not cut off 100% when lowering throttle all the way, I think what’s happening is after launch and the ground speed is significant, no longer can I do a 100% throttle cutoff when lowering the throttle, after that point when I lower the throttle all the way to land, motor stays at about 10 or 15% throttle irregardless of throttle position, and most times, my prop breaks on landing being prop is still spinning.

Just let me know if you need anything else.

It looks OK to me. This is the commanded (RC3 input) and output (SERVO3 out) throttle for that log. You can see they match in FBWA mode. Maybe some hardware issue? 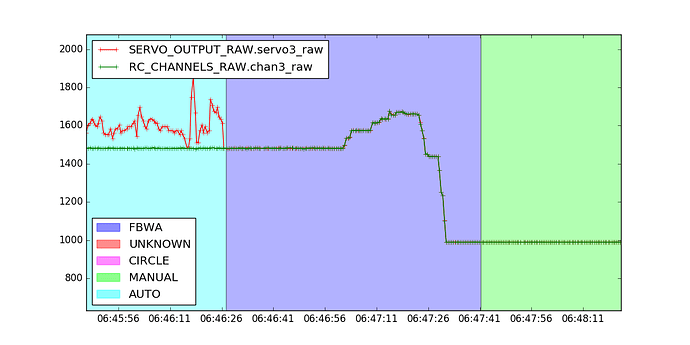 Ok thanks for checking into this, only thing I can think of is something ESC related?

Will let you know what I find out.