Hi Everyone. Recently I was flying plane with arduplane 3.9.1. I’ve setup the failsafe as
-FS_GCS_ENABL=1
-FS_LONG_ACTN=1
-FS_LONG_TIMEOUT=20
-FS_SHORT_ACTN=0
-FS_SHORT_TIMEOUT=5
pixhawk _1.param (14.6 KB)
pixhawk 1.param (14.6 KB)
https://drive.google.com/file/d/14pL9c0bNv08yPNPa1635HNZK0_D7Go5/view
I planned the mission for 10km, when my RC link lost at 8.1Km for about 60sec and regain signal after, failsafe was active but plane was loitering there rather it should RTL. Mission planner was sometimes showing FBWA mode and AUTO mode at HUD. I’m attaching logs and param file please review and tell me what was the fault and what should I’ve to do better flight in future.

If I understand correctly, you are flying your aircraft very far away from yourself. Flying outside your ability to see-and-manually-control the aircraft is very unsafe. Will you tell us what safety protocols you have in place in order that no person nor property gets damaged when something goes wrong?

Have a look. I’ve learn failsafe issue.As I didn’t active the failsafe in receiver.
But please look at the end of mission my drone crashed? Even I have changed the mode from AUTO to FBWA from the transmitter. What could be the issue?

(If you want my help, please upload the dataflash log in .bin format. Others may be able to help with the .log that you provided, though.)

Here’s the details of what I see.

After takeoff, after about 1min, 30sec and around 150[m] alt, the mode was switched to FBWA.
After about 40 sec of FBWA flight, the mode was set to AUTOTUNE. The plane was flown in AUTOTUNE for approx 13min, this is about half of the total flight.
The plane was flown briefly (30sec) in MANUAL, then in FBWA.
After 1min 30sec in FBWA, the mode was set to AUTO.
The plane completed 4 waypoints successfully in AUTO, and then, upon completing the mission, switched itself to RTL. This was at an altitude approx 350m. The plane began descending in RTL mode.
12 seconds later, the pilot changed the mode to FBWA.
In FBWA mode, the plane continues to descend, although not as sharply, for about 3min, 20sec. Then the pilot switches to MANUAL mode.
It appears the plane is landed (crashed?) in MANUAL mode, around 03:18:04 UTC time. This means the total flight time is approx 23min, 45sec.

After having crashed, the plane reports some FAILSAFE events: Changing first to CIRCLE and then to RTL as your FS_XXX_ACTION parameters indicate.

I have attached a plot showing the Altitude, as well as the MODE (purple triangles, set at 20*MODENUM, so 100 means MODENUM=5, which is FBWA, 220 means MODENUM=11 which is RTL, etc.) and the times that Messages are logged as black circles. (the y-value is irrelevant. The first group of messages are boot-up, the group around 1600-1700sec are waypoint-confirm messages, and the last group around 1950 are the Failsafe messages) 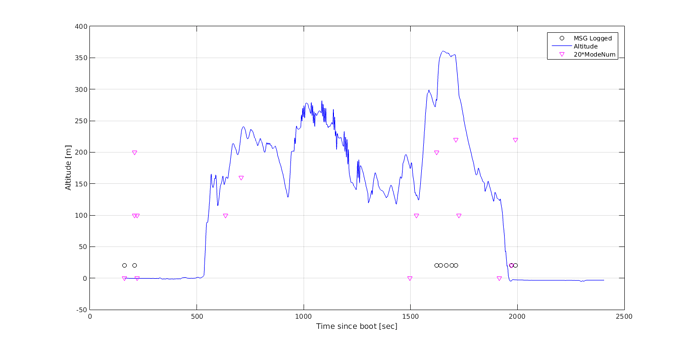 In summary, my recommendation is un-changed: Do not fly outside your ability to safely control you plane in MANUAL mode.

Thanks hunt0r for your detailed reply. Yes it helped me in finding out my mistakes. I figured out my the problem when signal losses it changes into FBWA mode because I’ve not configure the RC failsafe in receiver correctly, it was not providing that PWM to channel 5(mode channel) which has RTL mode. But when the plan was at about 8km away, the signal lost the plane start loitering there and I repeatedly sending RTL command. After some time when I regain signals, I commanded it come to the 8th waypoint which is very close to home. After hitting last waypoint, it dropped the throttle I guess, because engine turned off and plane turned over and crashed. Please check why plan was loitering at 8km even the mode was still AUTO and i didn’t give any mission to loiter at any waypoint.

Either I don’t understand what you’re describing, or what you say happened, in fact did not happen. Here’s a detailed breakdown of the descent: 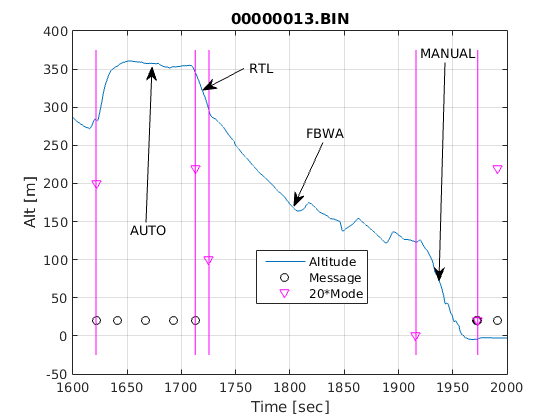 And here is the corresponding “Top View” of the plane’s path (Latitude and Longitude) during this time: 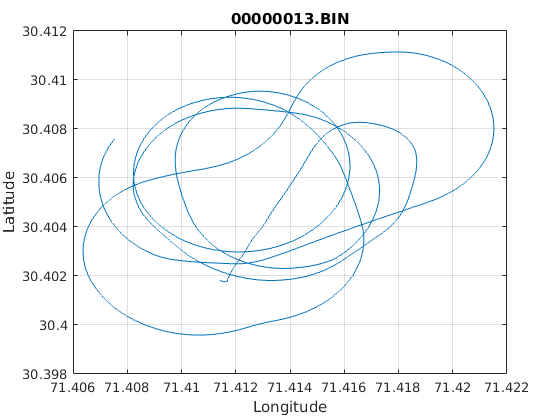 To understand what happened during each mode, here are the Lat/Lng of each segment (split by purple lines on the first plot) where a different MODE was used: 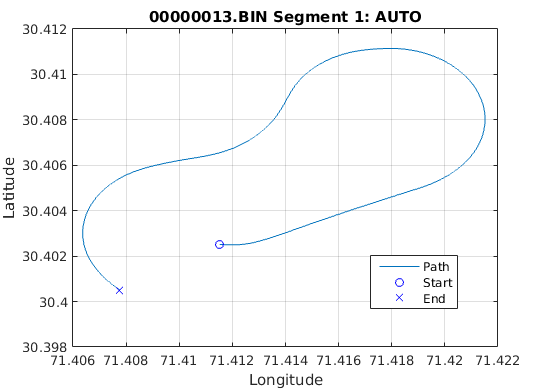 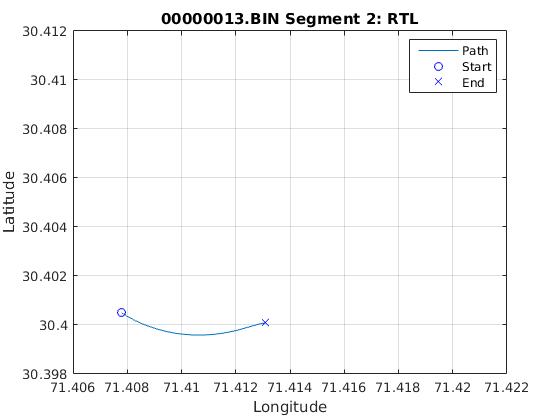 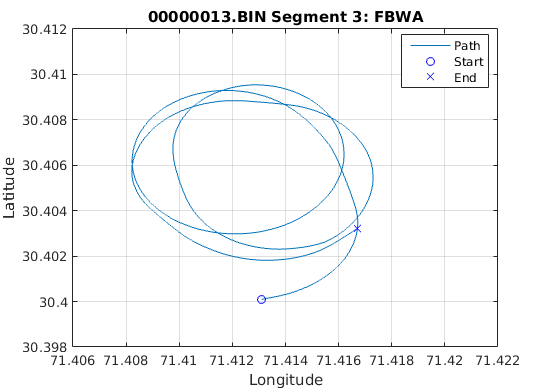 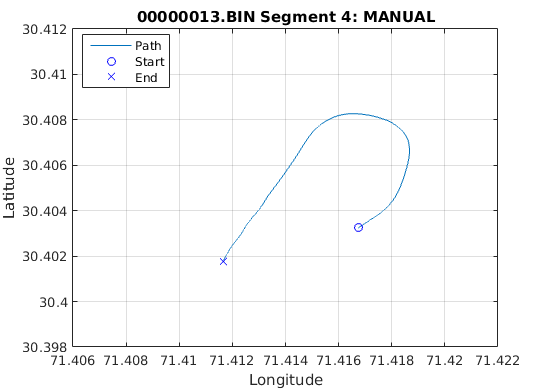 After some time when I regain signals, I commanded it come to the 8th waypoint which is very close to home. After hitting last waypoint, it dropped the throttle I guess, because engine turned off and plane turned over and crashed. Please check why plan was loitering at 8km even the mode was still AUTO and i didn’t give any mission to loiter at any waypoint.

I see no evidence that this ever happened. Am I missing something?