Is the pixhawk dead?

some questions which did arise:

is the pixhawk oem hardware dead ?
are there still “licenced” producers like 3dr ?
is the only valid one at the moment pixhawk2.1 cube ?
Whats happening with 3dr ?
Who produces and sells actual pixhawk cubes and where can I order them is it proficnc?
Are all pixhawks now clones ?
Will there be a future pixhawk FC ?
Who will produce it ?
Where can I get non-clone pixhawks right now ?
Which Hardware would you recommend for a professional project (aequivalent dji matrice series)

thank you in advance

Nothing is dead. The original Pixhawk is not manufactured anymore, but it’s an open hardware and open source project, so anyone can do it with equal or higher quality.

Go for a Pixhawk 2 from proficnc.
You should have higher standards for the equipment than considering DJI matrices a “professional” thing.

Yes, all Pixhawks manufactured now are third party. Edit: Corrected by fnoop. However, they are not “clones” in the traditional sense; the Pixhawk was created as open source hardware with the intent of having third party manufacturers, so they are (generally) manufacturing them using the genuine specifications.

3DR is no longer manufacturing hardware for the DIY/hobby or “prosumer” market. They now have a turnkey aerial surveying product called SiteScan, and that’s about it.

The Pixhawk 2.1 is designed by Proficnc and manufactured by HEX. You can buy directly from them, or from a more local retailer. All Cubes are manufactured by HEX, so all retailers have genuine products. There are third-party carrier boards for the Cube, though, such as Spektreworks’ board and Dronee Pilot.

The question of “future” Pixhawks is an interesting one; Pixhawk is just the name of the original open source specification, but future Pixhawk-like Ardupilot-compatible autopilots don’t necessarily need to carry that name. Some do, such as the 2.1, Pixhawk 3, and PixFalcon. Others, such as Linux boards like the BeagleBone Blue, don’t. Another way to answer this question is that the pedigree of the Pixhawk lies mostly with the 2.1, as I believe that was designed by some of the original 3DR Pixhawk team.

There are some good professional-grade Ardupilot boards out there. The 2.1 is a good choice, and can be combined with carrier boards with more features such as the ones listed above. The Emlid Edge is aimed at the the professional market; like the Dronee, it comes with a Raspberri Pi Compute Module for a built-in companion computer and video streaming solution.

You can buy the original pixhawk (not a clone) from here: 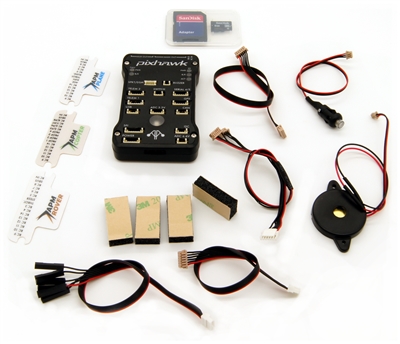 From the founder of 3DR (3D Robotics), reintroduction of PixHawk, with all the original parts and using the same suppliers. Assembled 100% in California.

The PH2.1 cube is flying high with excellent support, and new models coming