This is also posted in the Google development group, but in the hopes of more input on the GPS issues I’m reposting here.

Sometimes the Iris GPS quality and ability to find satellites is very inconsistent and unstable.

This flight is loitering and casually maneuvering around a parking lot.

Sometimes the GPS quality gets marginally better in specific increments over time. This was a very active flight.

This was also a very active manual flight

Here is our first automated flight test in the same empty pasture above. Fortunately all personnel were at a safe distance behind a vehicle being used as a base station, because the unit immediately flew under full power straight into the trees due to bad GPS. The path shown is not accurate - the unit ran into low hanging brush and vines, and was stopped at the edge of the woods.

Sometimes the GPS gets steadily worse over time. Each spike below is when it loses one sat - while in manual flight. The first half of the flight was in loiter. 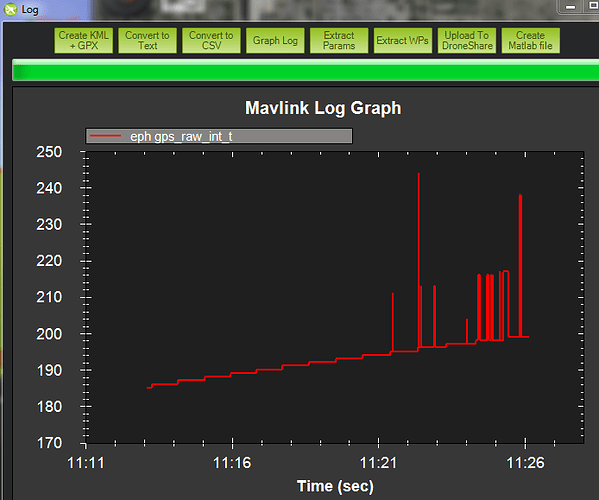 The logs for the above flights are available here:
http://questionphotography.com/iris/flight_logs.zip

First bit off advice or a question really why did’nt you take over manually if the airframe was heading off in a direction you did not want it too?? The situation is not suddenly going to get better. I wonder if the trees in the wood were not shielding parts of the sky.

There are times of the day when GPS satellite geometry is not the best for autonomous flight, you should check before you fly really. You might look at sites like this nstb.tc.faa.gov/RT_SPSPDOP.htm

Andropilot will do it for you if you have a live internet connection. It also allows you to set a warning limit on a minimum number of sats seen, I set mine to 7 if it gets to that its time to land.

I should be sleeping so will let others look at logs!

The unit flew maybe a total of 30 feet in a matter of 1-2 seconds, from a complete stand still on the ground. We uploaded waypoints, armed the unit, and then set it to auto - and expected it to take off more-or-less straight up.

Instead, it immediately flew from a dead stop at a height of perhaps 1-2 feet straight into the treeline and was stopped by brush within a second or two. I immediately put the unit back in stab and disarmed it.

Hmm, I am sure ardu experts will have a better look at your log.Meanwhile I think you might be better off if you start the process somewhere in middle of the ground rather than the edge as in this case which gave you less than 2-3 sec , little further east would have given you may be 8-10 sec before it reaches the edge or any other obstacle. Good luck next time.

I have to admit , I do not understand the issue. For me this looks like a typical GPS log, flying around . Nothing below 8 Sats, HDop not worse than 2.1…

I did not find the edit function . I wanted to add, if you are loitering at the same (non shaded) place, your logs will look more flat…

There are multiple logs with less than 8 sats, and the stair-stepping on eph seems pretty odd to me?

Here is another log demonstrating the consistent stair-stepping eph, with spikes close to and over 2.5.

We have not seen the stair-stepping eph value on non-Pixhawk units. Have you? 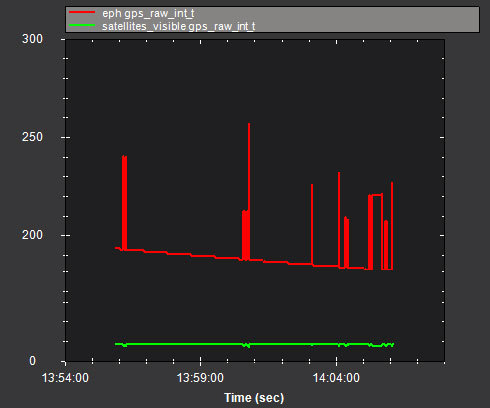 I was there when the GPS flipped out and we both almost received free haircuts. Having flown several variations of APM quads for the past 6 months I can assure you this was not normal behavior. The Iris would suddenly think it was somewhere totally different from it’s actual location and try to correct. According to the manual under the GPS Glitches section it states:

I do not doubt, that youve had a issue, but my logs look about the same, without facing this problem.
I have to admit, I did not even have a look at them (until now), because the IRIS behaves as expected.
At least I cannot recognize a difference to an APM 2.6 (with NAVILOCK or U-BLOX Neo) concerning GPS modes. 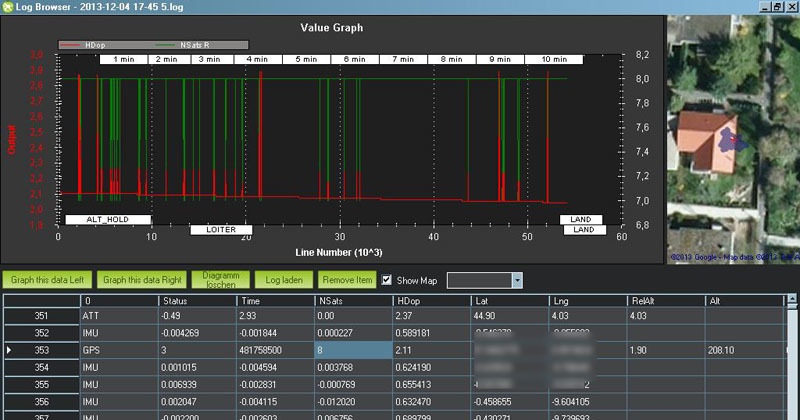 This is an example of what I am doing pretty often, in order to take some in the air picture without a second person. After a warm up time, the bird sticks at its place (max. 1-1.2m circle …it looks far worse on the google map than it is in reality) At this place (due to West being shaded), Ive got usually 7-9 sats with HDOP between 1.8 and 2.2, getting better after 2nd battery (which I experienced with other FC as well) Btw. 3.1RC4.

Maybe you try the RC7/RC8 after Setup and Erase, to exclude other errors.

PS: Its not conveniant, that embedded pics may only have 800 px .