@Leonardthall I had a chance to perform takeoffs and landings in loiter mode while testing the z controller relax feature. I’m assuming here that the position controller in 4.2-dev is basically the same as 4.1. I had some issues when taking off and landing in loiter where the aircraft wanted to pitch or roll to follow the target (which I did not move so it was GPS drift). In any case I ended up fighting the loiter controller to keep the rotor head neutral. I’m not so sure what can be done for landing as we are already freezing the position controller once it declares Land_complete_maybe. Here is a plot of that process. 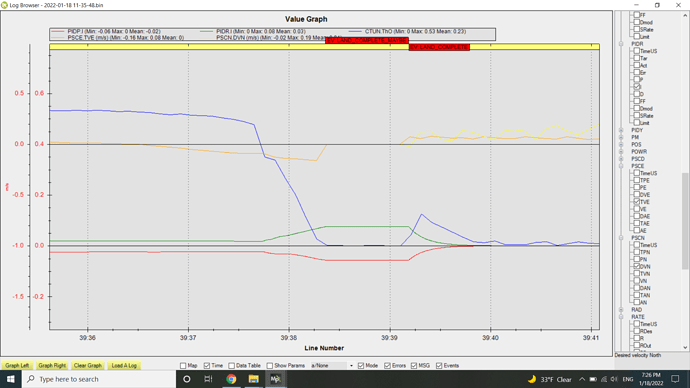 Now for takeoff, I believe we have some improvements that can be made. Here is a plot of a takeoff 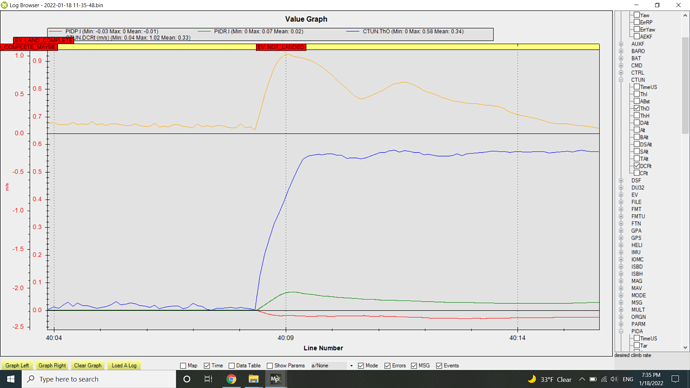 Ok, this is a good place for my thoughts.

We have a number of issues here we need to take care of to be happy with where we are at with the position controller.

Initial state exceeds our limits. We have a fix in at the moment but we need to ensure it doesn’t interact with our other fixes.
Initial state is sensitive to accel noise. I think we can zero our desired accel and fix this. This is probably the most important fix to go back into 4.1.
Relax is not perfect. Now I suspect this is being made harder to get right due to the first two fixes.

Finally more on topic, take off is sub optimal. As you pointed out one of the main issues is we are running the position controller while still on the ground.

My goal for this week is to fix all these problems and also implement a pause mission command.

On the take off issue. I have been thinking about this and I think the heart of the problem is we do not handle the ground contact portion of the take off separately from the flying portion. Instead we assume the aircraft is flying so quickly we can ignore that portion.

My proposed fix:
I would like to implement a TOTRT “take off throttle rise time” parameter. This parameter would define the time taken to increase the throttle (vertical actuator) from zero to 100%. When the aircraft takes off the throttle is linearly increased from it’s initial value (zero probably) to 100% over that time. At the end of that time we declare the aircraft is flying (land_complete = false). Obviously this will result in the throttle going to maximum on every launch but it guarantees that this phase will always complete after TOTRT. To remove the full throttle take off problem we can add a couple checks such as:

So the worst case here is noise causes the change to the position controller immediately resulting something resembling our current take off. Or we reach full throttle before triggering one of our checks, overloaded aircraft maybe, EKF problems, pressure bubble… Not sure.

The idea of this is we are delaying our navigation to immediately after we loose contact with the ground, ie flying, where our control should work as it was intended.

To make this easier I need to remove loiter from the take off procedure so the code is simpler and we can handle the position controller directly.

Part of this problem is the very high noise that helicopters get as soon as they touch the ground.

The accel filter INS_ACCEL_FILTER is set to 20 Hz so this is letting much more noise through than we would like. So this is part of the problem. Dropping the accel filter to 5 Hz would improve this significantly.

This is solved during take off using the throttle ramp approach. During landing it is fine as we land because we saturate the collective in the low position. As soon as we relax the controller we remove this saturation. Further complicating matters is these accelerations exceed your maximum acceleration meaning if we limit our initialisation values we can’t zero the controllers.

We relax the controller by:

So we are left with zero output from the PD terms of the accel controller leaving only the I term.