How do I make a pitch curve for ACRO and other flight modes?
In the transmitter?

Yes, I do it in the transmitter for acro. Set up your transmitter so it uses the collective pitch curve only in acro, and make the flight mode switch to switch the collective curve out when you go to any of the altitude modes. Put a slight delay in it to match ArduPilot’s slight delay so it switches from your acro curve to the mid-stick hover curve used in the altitude modes smoothly.

The purpose of the IM_STAB_COL’s was to line up Stabilize collective with the altitude modes. But it actually is totally unnecessary to have that in the code - it can be done much more accurately, and with more options for expo and custom manual flying curves, in the transmitter.

Edit: I think I may have posted it before. But I use an 11-point collective curve in acro. I also switch in cyclic expo that softens the cyclic around mid-stick in acro. It makes the helicopter very stable and easy to fly.

That sounds a little tricky. I haven’t played with this but you’ll need to make sure that the collective out (which means selecting an H-1 type swashplate in your transmitter setup) of the RC transmitter comes across on channel 3 or have that mapped correctly in ardupilot.

That sounds a little tricky.

It’s not “tricky” at all. Just set up a curve you like and apply it with the mixer in the RC. Flip it in and out with the flight mode switch.

I just looked in OpenTX Companion, guess I’m using a 17-point curve instead of 11-point for the collective. 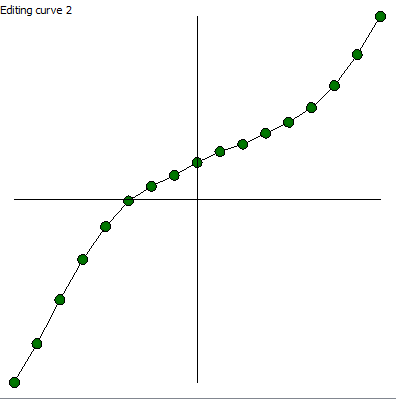 I think this depends on what transmitter you have. Some would be easier to set up like this than others. the user needs to be certain they have this setup properly in the transmitter so it doesn’t affect the input to ardupilot. I like the idea though.

I think this depends on what transmitter you have.

I don’t have Stabilize in my setups anymore, but I did have separate collective and cyclic curves for Stabilize too. In acro the expo is different than in stabilize because of the autopilot being in the picture in stabilize.

I think I been using this setup for close to a year now, ever since it dawned on me that the RC has better curves in it than IM_STAB_COL with its basic 4-point curve. With the RC you can make the collective as sensitive as you want in the hover area, or make it “soft” so it’s really easy to fly. I like it “soft” in the hover range.

Thank you very much Chris!
That will make things a lot easier.

Please tell me one last secret:
Which “slight delay” do you use and how did set that up in OpenTX,
in the mixer?

Yep, use the mixer delay. And you only have to delay it going from acro to the altitude mode, usually the down direction if your curve is above the xy crossing point in the curve editor. Look at the servo output screen on the RC to test it before you fly it.

I’m not exactly sure why there is a delay going from acro to altitude hold (or any mode using it). But going the other way from altitude hold to acro the switch is instant, so no delay in that direction.

And here’s the nice thing about using the RC when you have a fuel helicopter; at gross takeoff weight with full fuel you will need one curve that is a bit more aggressive. After an hour long flight with all the fuel burned off, you set up a switch to flip in a different curve for min fuel weight that lines up with the fuel gone. Curve 1 is my minimum takeoff weight curve, Curve 2 is my maximum gross takeoff weight curve. That’s why I like the RC curves better than using the IM_STAB_COL’s. The IM_STAB_COL’s are probably ok for fixed-weight helicopters. But I don’t fly those.

I have Taranis radios and I have a different setup than ArduPilot has because my governor is on Switch E. With the switch down there is no governor, no curve. With the switch in the middle or up, governor is on + Curve 1 in middle, governor on + Curve 2 in the up position. So one of my pre-landing checks after a mission is to flip the governor switch to middle position after a long flight with the fuel burned off.

Thank you very much for sharing this.
I will test that soon.