I need help updating my 3dr solo hardware. I did my first hardware upgrade i changed the GPS from what 3dr had in solo I changed to the mRo GPS u-Blox Neo-M8N / 3DR SOLO Upgrade I didn’t fly solo be for with the what 3dr had in solo for the GPS because i was worried what i read about other people having problem with what GPS comes in solo from 3dr. I don’t how long it was take 3dr GPS to get Gps Satellites but with the mRo GPS installed in my solo it so fast to find Satellites when I boot up solo it get Satellites so quickly I don’t have to wait it say on the controller fly.

And I change the 3dr last firmware put out. I changed to the opensolo fimware I don’t have the green Cube so i put the opensolo on the cube is inside of solo now. But I read something that is bad because solo reen Cube fix a bug solo have in the motor pods i read if i give solo more power if i fly it so fast the motor pods. Will turn off in the air. I will get green Cube for Christmas i need help how to insall it in solo and how insall opensolo on green Cube using. The sidepilot app for ipad and iphone the right way

Because I don’t why when I am flying I have cam on to sees what the cam sees on my ipad pro about all the time the live video to my ipad stop working i have to solo to come down and I have boot the cam to take live video working again I don’t know what is happening sometimes it will change settings like i have in video and it will change the to take a picture by itself I know I don’t change nothing on the cam when it is flying because my hands on the controller joysticks. I have Cerebral palsy i have a good and bad hand. And I am worried to take my good hand off the joystick and change a setting on my ipad when solo is flying. Because I did that 1 time to test orbit and solo come down so fast i had time hold joystick and push the joystick up:) 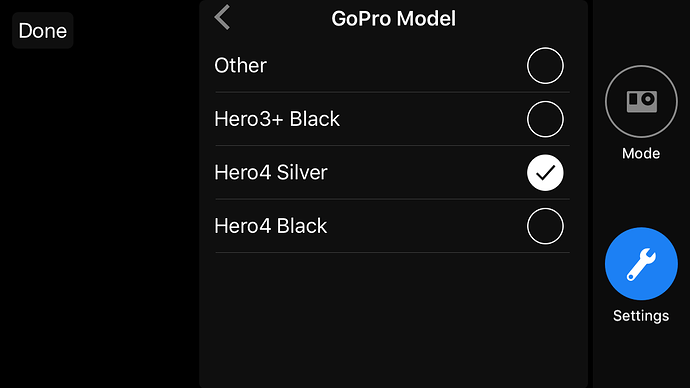 First, all the open solo stuff you posed about is a little off. The Green Cube is not requrired. Your Solo is perfectly fine as is with the stick Pixhawk 2.0. No need to worry about that.

As to the camera issue, this sounds like a malfunctioning GoPro to me. Does the GoPro work properly when it is not
on the Solo?

Have you updated the firmware in the GoPro?

It misbehaves if you don’t.

If you can’t get to all the Settings and Modes, it most likely is the firmware.
Also make sure your HDMI plug on the gimbal is seated correctly and there is no damage to the socket in the GoPro.

yes the GoPro is working fine and yes i did the update for GoPro i think have last update for that gopro silver. problem is when i am flying the live video from the gopro silver. stop working it on my ipad pro on the 3dr solo app the video will stop be frozen on my ipad screen and i can’t do nothing but have the solo come down and i have to turn off that gopro and turn on gopro again to have the video live again. i have to do that over and over. it like when i am flying the someone is pushing on the gopro silver button on the front of the camera and it changing the Modes itself

So are you saying the GoPro has changed modes when you land to check it out?

Yes like when i go to fly I set the cam to video mode i can see live video on my ipad and I am flying say 5 mins and after 5 mins on my ipad useing 3dr solo app the live video will be frozen i can’t see nothing So i have to land and the mode be change like to picture mode by itself.
Is a way stop camera buttons working when I am flying?

I think Matt may have hit the nail on the head when he thought it was a faulty GoPro.

Can you try another camera?

I think Matt may have hit the nail on the head when he thought it was a faulty GoPro.

Can you try another camera?