Nice to have the ability to customize the parameter “AP_PARACHUTE_RELEASE_DELAY_MS” in MISSION PLANNER.
500 ms is very little to stop the engine . It is very important for DELTA aircraft with pusher propeller . The parachute tangled in the propeller . Even if the brake is engaged.

that number totally depends on the airframe parameters and the chute release mechanism and the chute design/type… which is why its customisable… if I used 500ms on my 250 “racing” quad, it’d be buried in the ground before the chute was even released, let alone open… 500ms is way too long.

decide your own number.

I’m talking about the possibility of installing this option in the Mission Planner. Now , this parameter can only be changed if the compiled firmware . For COPTER 500ms can be many. For aircraft with a pusher propeller - small. Creating a mechanical delay the release of the parachute ? I think the user should set the number in the SCS .
I usually point out DO_PARACHUTE option at the end of the mission and landing aircraft .

@Smolman, yes this should be configurable.
I’ve added a CHUTE_DELAY_MS parameter in master, defaulting to 500
thanks!

And I found it’s a little mysterious.Why I deploy parachute,the parachute-on pwm only lasts about 2 seconds, why is it not continue to be parachute-on status?

It is normal for a servo release to not be permanent. Does your parachute need it to be permanently open to work? If so, can you describe the mechanism you have?

hi,my parachute mechanism is normal,nothing special.! I just want it to be more secure,in case the wind or the parachute slowly dropping from the capsule;
Or can I extend the deploy time?

tridge, thank you.
I do not see the need to return to the closed position SERVO . SERVO should remain open. It may be an exception for RELAY. I think it just creates difficulties.

It would be very good if the community has supported my idea . Add MISSION PLANNER button emergency landing on a parachute . Very often , especially in the auto mission all the attention focused on the GCS. This gives an additional chance for salvation. 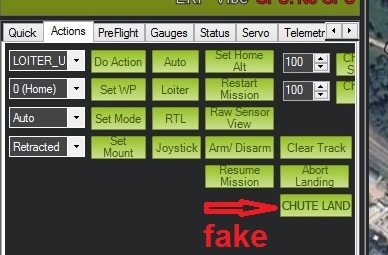 there already is a MAVLink command DO_PARACHUTE which takes an option PARACHUTE_RELEASE. It may already be possible to trigger from MissionPlanner
If not then please ask Michael to add it in:


I don’t use MissionPlanner myself, so I don’t know if it already has this option