How close can a GPS/compass unit go to heli structure and electronics?

I’ve now got my TRex 500 flying the way I want it, with Arducopter 4.2.1. As a newbie to Arducopter in helis, I played safe and placed the GPS/compass unit quite a distance from anything else, as you can see in the photo: 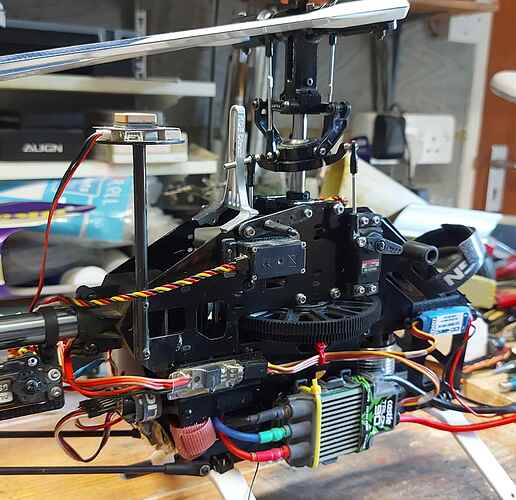 In the future I want to use the same system in a TRex 500 with scale fuselage, so need to bring the GPS/compass closer to the frame. Apart from trial-and-error, are there any rules and/or suggestions regarding its positioning?

Every esc is different, every GPS antenna is different.There is no magic distance number that fits all. You need to test it and see how much it drifts and glitches.

But that said, all electronics cause EMI

But can drift and glitches be detected on the bench, or is that only possible from an in-flight log?

Your spacing should be fine. But you could always mount it on the tail boom, thats where i put mine to get it away from all the motor and battery wires.

Would positioning the GPS/compass off the front of the battery tray (requiring longer leads to the FC) be a problem?

Then it would be closer to the high current carrying cables from the battery. Maybe it’s a bit more noisier for the compass…

I wonder how much the blades would influence the GPS signal, since carbon fiber does have some RF shielding properties… That is of course if you are using CF blades

They are cf blades, JaSw, but all appears to be good. Wherever you place it, there’s practically no way not to be beneath the blades

GeoMuir, I had originally though of the tail boom, but a forumite’s picture convinced me to put it where it is, close to the fc. But tail boom is not going to work for the scale fuselages I’m hoping to put the system on next. My two scale helis are a TRex 500 with a Hughes 500 fuselage, and a TRex 550 with a JetRanger fuselage. Both of them might be able to accomodate a GPS unit mounted like I have now, but much lower down. I don’t think either have space in the tail boom, unless it’s external, which I don’t want.

So, a lot of planning to do before I install anything in my scale helis. In the meantime I have a working benchmark with this heli which I’ll be able to compare with different GPS placements. I’m going to start by lowering the GPS mounting mast by about half its height. If I need to put it at the front, I suppose I could screen the GPS cables within a grounded tube of wire braid.

Thanks for your comments.

You dont need the gps away from the high current wires but the compass, so you could get a standalone i2c compass and place it in the tail, its about the size of a postage stamp and weighs nothing so you could fit it in the tail much easier and have the gps mounted lower down or have it on the nose above the battery.

Thanks GeoMuir, that’s something to bear in mind. Come to think of it, couldn’t I rely on just the compass in my FC unit?

isnt it closer to the wires that your GPS? generally its a bad idea to use the one in the flight controller.

Lots of issues to consider when planning a layout! Thanks GeoMuir.

I only fly scale helicopters, but usually larger ones (700-800). Here are a few of my experiences:

You can easily test this by attaching a stable wooden stem to your mechanics (leave out the canopy), attach the GPS/compass and FC there and fly.

Try it, you will be satisfied.

I had a good look at my scale helis yesterday and I’m pretty sure the FC can fit on the side of the frame, at the rear, as it is now on my bare TRex 500, which seems to be working well. I’ve now lowered the GPS/compass unit by 1" (25mm) from where it is the the above photo (and recalibrated the compass), and it looks like it might even fit inside the Hughes 500 fuselage at that location. It’s now about 6cm from the rear servo. But in the nose was my first thought, with a plywood or fibreglass mounting plate as far forward as possible. The tails of all my helis are TT, so no static problems from a belt. The front ends of my fuselages are both held on by magnets and location pegs, so I don’t think are going to cause any vibrations.