Hexacopter - a DJI Flamewheel F550 with a GoPro takes off, reaches an altitude of 93 meters then falls out of the sky. It’s unclear why. Synopsis from the log file. Any help tips/appreciated

Added the bin file as a shared link. Hopefully this works given file size was too large for website

you crashed due to bad configuration error:
you lost RC connection in the middle of the flight (switched off RC?)

Your RC receiver does not cut the stream , and outputs all channels at around 999us … 1us below FS_THR

The mission ended with RTL, and it switched to stabilize, … with 999us on throttle and yaw, it disarmed.

Make sure your receiver is properly setup.

Andre-K thanks for the response. The copter is equipped with an X8R receiver. What do you mean by ‘your receiver does not cut the stream’? Made the following changes to the quad prior to the flight

a) changed the speed to 1500 cm/sec
b) changed the failsafe to ‘continue mission’ instead of RTL which was limiting us.

From my perspective we lost power on it’s way home and my initial thought was: Did a connector come loose on the quad or the autopilot. A scan of the quad after we recovered it disproved a loose connection. Of course now the log points to failsafe issues and its unclear if the change in b) had some side effect. Didn’t switch off R/C - at least I honestly don’t recall doing that.

What do you mean by ‘your receiver does not cut the stream’?

the “best” option is to have the RX stop the SBUS/PPM output , to me it seems like you still have an output. , most channels were at 997…999us .

none of the changes you did caused the crash.
The RC radio lost connection midflight, and never regained it. (seems like you planned to continue mission on RC loss)

Are you using Mission Planner to do your plots? Think I found the plot you’re alluding to 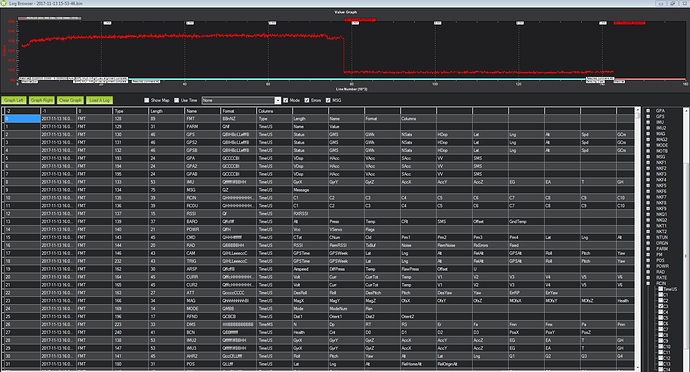 Right before the 4 minute mark the PPM values fell below 1000 and maintained those values for over 3 minutes before the quad disarmed?

One last question for you. Similar story with this quad except this one went up and fell straight down. Didn’t execute the mission. What’s your assessment from the bin?

I am using APMPlanner2 , but yes, you are looking at the loss of RC right in the middle.

is easy. your FS_THR was set to 985, when you lost RC , all RC channels went to ~991us , not trigging failsafe, it switched to stabilize, and set 0% throttle. (2 sec later, disarmed as commanded by the RC)

To stop crashing, configure failsafe properly, if all those RC link losses are unexpected, throw the TX or RX in the garbage. 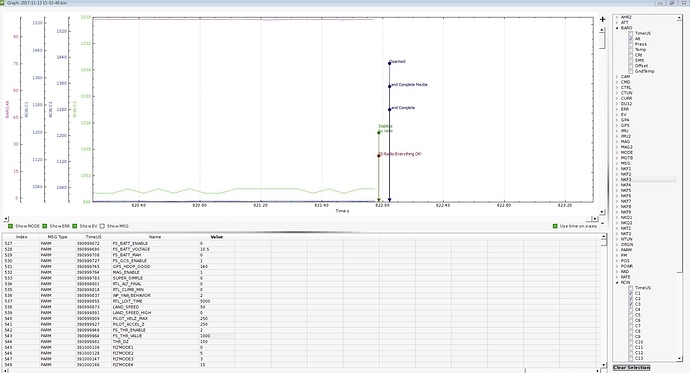 Downloaded APMPlanner2 given the plots seem to make more sense mainly with multiple entries. Two - I think final question for you. When you said ‘then with time tends to go more toward 999 - at some point it went >=1000’.

But on radio recovery, mode is not changed instantly (it need to see a mode change to do so), so I am not completely sure what went on here, but then again, when not configured properly, I did not give that much thought.

RCIN is not logged very often, and so it’s hard to say what exactly went on.

As for “FS-Radio: everything ok” and “mode” order: Mode changes are logged using critical priority level, and bypasses the write queue, so that is the reason it appears as if mode changed before radio were ok.

If I disconnect the video (i.e. remove the video connection to the Lightbridge) and run the missions with the ‘continue with mission in Auto mode’ option there’s no issues. What would I check in the log file to determine if there’s some current/voltage issue?