Hello to all. Today my hexa has crashed due to a broken esc wire. Probably due to vibrations it has broken inside the insulation and I couldn’t detect it in my inspections.

I realize that something was wrong when it suddenly banked. I was at low altitude and hadn’t had time to switch to stabilize. I’ve tried to command it to go up but id didn’t went up. Instead it kept descending slow and steady until it crashed.

Video: https://youtu.be/mFSPCnYjkUE
Analyzing the logs, I noticed that the other 4 motors hadn’t increased their power. I would expect them to increase it in order to keep flying so I could command an RTL, even if I have to loose yaw authority.

I would kindly ask your help in order to tune it to be more reliable against motor failures. What can be done? What can I do and pehaps test it to make sure that it can fly with 5 motors?

Many thanks in advance!

Interesting.
A single motor failure should not have crashed with the other 5 redundancy.
I had the same thing on my hex.
At a distance, I could see the hex rocking thinking to my self “what is going on now?”.
It started to head back and once it was about 100 foot (30m) away, I could see one propeller not spinning.
Went into RTL with no issues at all.

I may not be able to offer advice on the failure since the analyzer only goes to 3.3.3 firmware but try these wooden propellers if they are your size:
https://www.readymaderc.com/store/index.php?main_page=index&cPath=534_539_568

Please note, they are each

Thanks for the tip. Mine are 13", however I will give them a try on my other quad which uses 12"

I’ve replaced the propellers, double checked everything and give it another flight and everything was really smooth , like it always was. My option to go to a hex build was mainly to have some level of redundancy. This is very important. I hope someone could give me a tip regarding Ardicopter’s settings.

@rmackay9 Could you please compile an arducopter 3.4.3 hex for me with your patch to test the motor power off switch? I would like to try a few settings and see If I can make it work.

I’ve seen this at least twice in the last year or so. My logs look just like the one posted by @tabascoz. RCOUT for one motor goes to 100%, the motor opposite is virtually shut off, and the output to the other 4 doesn’t increase appreciably.

Is the latest release supposed to have fixed this problem?

Is the latest release supposed to have fixed this problem?

In git issue https://github.com/ArduPilot/ardupilot/issues/838 Leonard suggested to have this issue closed and add notes to wiki on how to maximize chances of recovery.

He also said that the copter should be powerful enough to lift three times its takeoff weight, I believe we could use MOT_THST_HOVER to have an idea of it Mine is around .28 so I believe it is OK.

In addition we should keep ATC_RAT_YAW_IMAX and MOT_YAW_HEADROOM low. The problem is that I couldn’t find anyone to tell me how low it should be. Of course, it depends, but it would be nice to have @rmackay9’s firmware to test it.

I believe I can port the patch to the current version, but I’m not conformable doing that without proper knowledge of the code and putting it on my bird.

You must have enough power, so you can check the output of motor from logs. in my opinion, the output value shoule be less than 1500.

Agree, this is important functionality for hexacopter. I choose this frame because it can survive one motor failure and it is huge ADVANTAGE. And it worked on my old hexa and fimware 3.2 (or 3.3 I’m not sure). I was able to land without damages.
But today I watched “soft” crash on 3.4.1 when I lost one propeller. (My fault, I was tested propellers and screws wasn’t fixed). Altitude was around 10 meters and hexacopter started to spin around yaw and went slowly down.
When I check the log file, I found same information which are mentioned in this thread. One motor @100%, opposite one spins slowly and the others runs like nothing happened. Why ?
At least why yaw spinning is not compensate by default ?

I can not check the parameters like ATC_RAT_YAW_IMAX now because I updated to MissionPlanner 1.3.43 and Parameter List and Tree pages are missing

I can not check the parameters like ATC_RAT_YAW_IMAX now because I updated to MissionPlanner 1.3.43 and Parameter List and Tree pages are missing

Try this it will tell you if your hex has the capability to fly after a failure. I love this Calculator it is great when your building.

@pat_ballard: yep, I know this calculator and I use it sometimes, but I’m not sure if it covers ArduCopter logic in this situation. My maximum motor thrust is 1.7kg and copter weight is about 4.5kg. It should be enough power to fly with 4 motors. But as I can see from the log file it doesn’t happen. So the ArduCopter logic don’t use this potencial or I have to tune some parameter somehow. But how?

Hi Ivosch and Tabascoz,
ecalc is obviously no longer free and it also only relies on raw data that have been assessed by someone at some point so I believe that you already got most of these data… but have you ever really tested thrust on your setup “as installed” under realistic conditions?
At first sight it looks like your hex should be able to fly with four motors, given all four motors really develop 1.7 Kgs of thrust. On the other hand, especially max. thrust severely depends on the voltage left at the moment of failure, on voltage changes upon challenge (temperature of the battery!) and on the movement of the uav (steady hover vs. fast descent). If your hex descended after failure, then there was clearly not enough power left, and yaw behaviour could be the result of the FC trying to compensate bank & pitch during descent, which is not easy on a hex frame with four motors, maybe some motors going to max. thrust already, resulting in yaw and tumbeling…
This at least was my conclusion after my hex motor failures which also resulted in “hard landings” rather than controlled flights. I simply changed the battery packs to get higher voltage (4s to 6s) , since the hex was originally designed for 6s anyway, and everything worked perfectly. Or you remove some weight for a better safety margin. One simple way to check for failure compatibility is to unplug one motor and try to take of from a secure surface (soft grass). Hope this helps, merry Christmas, Julian

I have tested my setup motor+ESC+propeller on this tool. The thrust was 1780g @ 13.4V. During crash there was on the battery 14.2V. But anyway:
@fpvberlin do you think that it is ok when these 4 motor output is around 1650 (max 1742) in this situation? Check the log.
Drone was descending and CW rotating and I was trying to rotate it to opposite direction with max thrust in Loiter mode (left stick was LEFT TOP).

Hi, it all depends on the situation the drone has to deal with, so you cannot expect all remaining motors to go to max output immediately… and, of course, it depends on what your max pwm output is- your max throttle output presets… but I will have a look at the log later, cheers

Hello,
Thanks for all answers!

You must have enough power, so you can check the output of motor from logs. in my opinion, the output value shoule be less than 1500.

They were around 1600 before the failure, The machine was not well CG balanced when it happend ( I knew it ) because I was flying with two packs and my gopro wasn’t all the way forward. After the failure the overall output has risen to ~1700. I was expecting more will from the arducopter thrust controller to keep it flying.

Sorry for your crash… It looks the same issue… Almost the same values for MOT_THST_HOVER and yaw imax/yaw headroom.

Try this it will tell you if your hex has the capability to fly after a failure. I love this Calculator it is great when your building.

My hex has almost two years and I’ve made dozens of simulations with ecalc. It says that it should be OK. Thanks[quote=“fpvberlin, post:13, topic:13576”]

At first sight it looks like your hex should be able to fly with four motors, given all four motors really develop 1.7 Kgs of thrust. On the other hand, especially max. thrust severely depends on the voltage left at the moment of failure, on voltage changes upon challenge (temperature of the battery!) and on the movement of the uav (steady hover vs. fast descent). If your hex descended after failure, then there was clearly not enough power left, and yaw behaviour could be the result of the FC trying to compensate bank & pitch during descent, which is not easy on a hex frame with four motors, maybe some motors going to max. thrust already, resulting in yaw and tumbeling…
[/quote]

Fpvberlin - I was in a medium speed forward flight before the crash. It almost flipped, but the controller has recovered and managed roll/pitch very well. The batteries are all good, less than 20 flights , two packs of 10ah - 4s. No problems raising all motors to full and drawing ~90A. They were about 80% of charge at time of failure. So I’m almost sure it wasn’t a matter of lack of power. I agree with you that if I have more spare power it would be able to recover. For sure. I haven’t had any damage on the frame but the propellers. However I’m not confident in flying above water anymore.

But as I haven’t seen the four motors left raising the throttle significantly even loosing yaw if it was necessary, I feel that there is still room for tuning/improvement before changing propellers / motors or batteries. I would be very pleased and happy to go down to the bottom of this and figure it out.

I have tested my setup motor+ESC+propeller on this tool

Nice tool. My way of measuring is not nice, but accurate. I held the drone with some negative weight ( pulling it up), secure it with a wire attached to a scale - then calibrate the scale to zero and power the motor up. I’ve measured 1.57 K of thrust. * 4 = ~ 6Kg - enough to lift the drone with 4Kg auw .

Now i’ll start to build the environment to compile AC code in my gentoo linux machine. Next steps would be to port @rmackay9 patch to turn off motor in middle flight and compile it.

Then the plan is to start to experiment with the yaw parameters, IMAX, I term and etc. in order to archive the goal of motor redundancy.

I really appreciate if an experienced dev could help me on the task, as I believe it is a VERY important topic.

Will keep posting news. Thanks!

A word of warning to UAVs with more than 120 flights… The culprit was this wire that got broken due to vibrations. 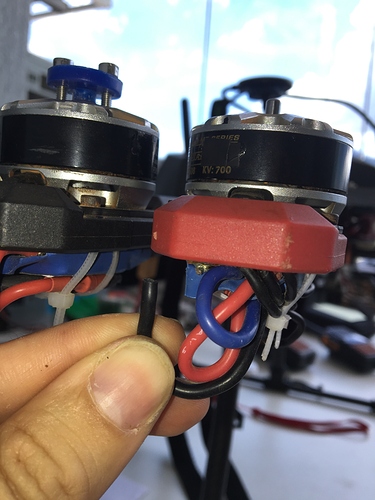 I’ve disassemble everything and have found other three wires in a pre-failure condition and two other showing initial stages of fatigue in PCB connection. One more maintenance check point…

This is reason why I moved ESCs to the main body. On the last hexa I got ESC failure after few flight due to vibration.

Good idea, however it would require a full rebuild. By now I’ll check all the wires every 30 flights.

Here is the ecalc summary: 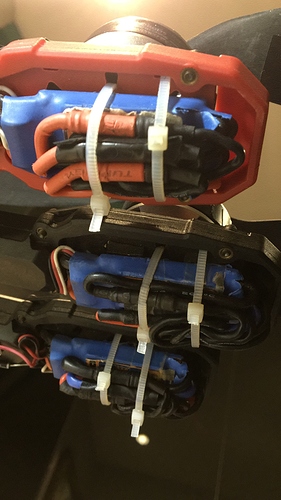