Looking for some step by step help setting up a helicopter with DDFP tail rotor. Using a DJI Alpha 60A ESC and im not sure where the pwm ranges should be and just a good general parameter check before trying to fly.

When you arm and engage the motor interlock ( throttle hold) the tail rotor spins up immediately to the 1500pwm range ( i presume that is ). Main rotor is also spooling up on soft start value set in esc. Would this immediate ramp up force the heli to want to spin around on the ground before taking off.

Also the esc doesnt have an adjustable soft start value that i can match with the Castle Creation ICE main rotor esc. Is there a way in ardupilot to add a longer soft start to match the main rotor?

Thanks everyone for the help. Really Appreciated. Cheers 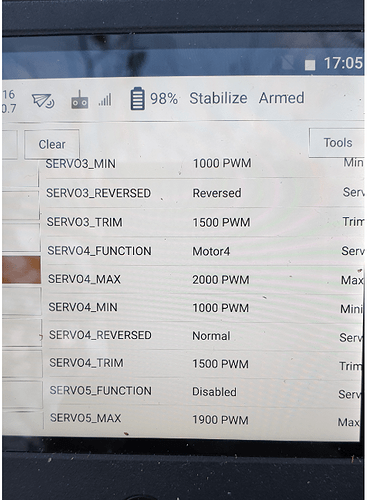 I have 2 Helis with DDVP Tail setup. Both using 2 Castle ESC each. I am using with all 4 ESC’s the Governors build in.
I fly with Arducopter -Trad Helicopter in mode 1 ( not very much liked by the experts).
The signal from the Autopilot is split with a V-cable to each ESC.
For me it is working without any tail problems for a couple of years now.
Good luck!
I hope Chris Olson can give you advice. He has done experiments with DDFP in the past.

@nigel please tell me what version of software you have loaded into your flight controller. Also please post your parameter file.

I hope Chris Olson can give you advice. He has done experiments with DDFP in the past.

IIRC, the range has to be normal ESC range, 1000-2000 pwm. I think I set the trim value to something like 1150 with the ESC’s I was using, as that fired up the tail rotor when throttle hold goes off and runs it at basically an “idle speed”. I could adjust the speed of the tail prop with the anti-torque control (rudder). But when the helicopter lifted off and tried to yaw it would then automatically throttle the tail rotor and capture the yaw (heading).

It worked quite well. But was not auto-rotatable. So eventually gave on it.

When I originally fixed DDFP I think I used the HAL to handle the arming/disarming status, because it used to start up as soon as the system was armed. That was not the correct way to do it, kind of a “hack” at the time to make it work. Bill caught that later and fixed it differently if I remember right. But I have not ever flown it since. I converted the Trex 500 back to belt drive tail and then crashed it and destroyed it pylon racing with it. So I have not had a DDFP tail heli since.

Thanks Fred for the feedback too.

Running the latest V4.0.3 firmware. Attached are my parameter file.

Helicopter has a 2.2m rotor disk running 1000rpm so trying to work out parameters to best work in with this. Also how best to configure the DDFP.

Thank Chris for your input hopefully we can get some more testing done our end and push the DDFP a little further if need be.

Thank Chris for your input hopefully we can get some more testing done our end and push the DDFP a little further if need be.

It may work with a larger size of heli. I don’t really know. I could not get it to work properly with the 600 size because the throttling response on the tail rotor was too slow. It did work, however, quite well on the 500 size. I don’t remember exactly what size tail rotor props I used. I think it was about 8" on the 500. I think 10 or 11" on the 600.

Thanks Chris, Thanks for the heads up on the reduced thrust and larger prop requirements.

We have 15inch right the way though to 24inch to test out. Hopefully one will hit the sweet spot. Fingers crossed then.

Any update on this? I’m doing a 700size DDFP heli and I’m rather interested.

Chris Olsson mentioned (indirectly) that it’s difficult to match the thrust AND response time of the traditional VP set-up. So in order to have the best response time, the tail prop should be as small as possible. That is only just big enough to overcome the worst case main rotor/blade torque.

But how big is that torque? We should be able to calculate it, if we know the Lift/drag ratio on the main blades and the weight or max required lift of the application.

I’m not familiar with the heli blade airfoil, and we can’t directly use the usual airfoil tools due to the circular movement (low inner speed, high outer speed), but we may integrate or approximate our way out of that.

Another way may be to calculate the force of the pinion gear to the main gear by current, voltage, efficiency, rpm, and estimated mech losses. And from that calculate required tail rotor thrust. 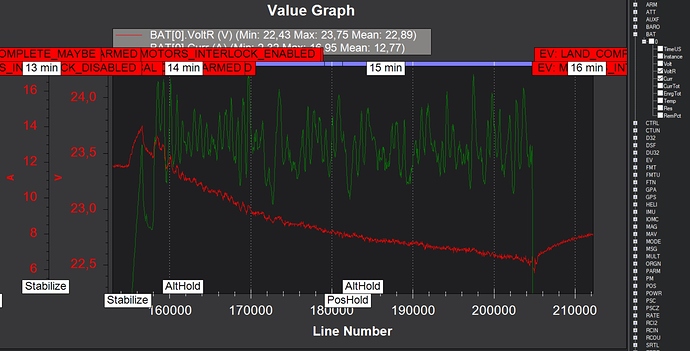 This is steady state hover, and we need to add thrust for climb performance, say twice the lift. If the lift/drag is assumed constant (it’s not), the required anti-yaw thrust increases to 580gr, which is still fairly low.

I have used a 2826mm (outside dim) motor with an APC slow fly 8x3.8 prop, that should provide some 700gr of thrust and is still fairly rapid in it’s spin up. Still working on the parameters before testing it out (can’t get the tail motor to spin/arm…)

Mike.
You have to connect esc to the output you have selected for motor 4. And then set the tail to DDFP. It should arm and once you enable motor interlock, the tail will spin up to counter torque

Bill, thanks. That is what I have done, I think. But I also set the servo 4 output to “HeliTailRSC”. Should I just have kept the “Motor 4” assignment?

Yes keep it as motor 4. That should fix the problem.

Great thanks, yes, now it spins. In both directions. I have of course set the normal prop rotation to counter the main rotor torque, but I need to work on the mid and end-points that can be set both in arducopter and in the BLHeli parameters…