Hectic plane crash in wind but what's the cause?

We had a bad crash today with a twin engined plane, the Eve2000. The wind was quite strong about 20-25km/h on the ground but the MP reported windspeed and direction wrong, the wind was from the east but MP reported it from the north so 90 deg out in direction and supposedly around 100km/h which it definitely wasn’t.

The plane flew to it’s first waypoint and then tried to hit the waypoint a few times but wasn’t doing well. For an unknown reason it switched out of AUTO into RTL a few times then back to AUTO and then just spiralled down. I thought it may have stalled but the airspeed from the log looks good the whole time. Unfortunately the dataflash card got corrupted somehow so only the tlog is available. I am trying to rescue the card so will post that log if I succeed. 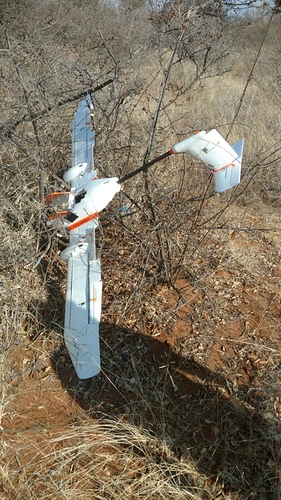 The crash site, still not sure what happened. Post crash inspection shows all servo pushrod’s still connected, surfaces and hinges still intact with no damage.

unable to download due to some “daily limits” - try sharing via google drive or something else.
Incorrect windspeed can cause stall, and the plane would not go out of RTL by itself, … logs will show more.

RTL switching was I think, caused by PWM’s being too close. Don’t think that caused the crash but who knows, so far there’s no obvious cause.

Ailerons in photo at the time of the crash show rolling right, but rudder left? Aileron/rudder mix was correct at time of take off, plane had a number of flights previously with no issues.

it seems like you RC reciever is going in and out of some preset failsafe positions (you should have none such ting enabled.)
Every time that happens, it also affect roll/pitch and every other channel - as stick mixing is set.
…The log contains ~ 80 occasions of mode switching

To make it worse, the plane is not very well trimmed, so pitch (and roll) integral builds up to fly properly, and is reset on every mode switch … causing some nose down and roll every time…

Fix your RX problem, disable it’s failsafes or set properly, do range check, and make plane fly stright and level with o hands in manual, use those servo positions as trim.

Thank you, yes the RTL mode switching was not intended and initially undetected so will sort that problem out.

Any idea on the change in RCOUT’s just past 4 mins? I think that, together with the stuff you mentioned may give a clue to the cause of the crash.

Plane had flown just fine in the previous tests, flew Manual first, trimmed it for level flight, then FBW-A, then autotuned at level 7, then a couple missions and loiters and all seemed good. A couple missions out to 3km were fine too. Here’s one of the previous flights (Takeoff & Loiter): https://drive.google.com/open?id=0B1RJsKdBfA0UWUVPSmhUd3JiVVk.

It’ll fly again, will fix it up and use as a test plane/backup.