Got it off the ground

Proper newbie here. Late to the party but catching on fast and have learned a lot in here. Thanks.

Short story long - Covid kicks in and I got a bit board so assembled a couple of guitars from DIY kits - switching out provided terrible parts with some premium pots and switches etc as we go and they turned out OK. Thats a whole-nother web page. So looking for the next thing to do …

… got a bit of form in the photogrammetry game as a GIS operator in a consultancy but never have captured the imagery myself - always inherited someone elses mistakes. So decided to apply the success from the new quiver of guitars and make a photogrammetry beast out of a Tarot 650 Sport. Went ahead and picked up a few bits and pieces online from the usual places and read a few docs here and among things they mention maybe don’t try a 650 sport as a first up build. Awesome. Nothing quite like having an instinct for trouble. If thats not validation then I dont know what is.

Anyway - it’s been a few months reading and gathering parts. Got to say the power distribution on the board of the 650S is a bit of a cruel joke so have avoided that and done it a bit differently. My soldering skills are fair to pretty good but not up to what is required there. Read a few more things and what was supposed to be a bit of fun has gotten quite serious. Maybe thats what was implied by dont try the 650S first?

Couple Details I can think of …

Apologies if I got terminology or acronyms wrong. Dont really get hung up on that stuff.

Being a GIS analyst during the day and a proper GPS nerd - already built up an RTK solution M8P GPS base and rover. The base station feeds into Mission Planner nicely. The Rover though is not exactly air portable - it’s a pole mount job with a high gain but will be using that to capture ground control targets to tie down the scan.

Thought better since above about the stretched arms and decided if I can get the not from the Minister for War and Finance then I’ll keep this one to belt around the park and make a 960 next. Still a Quad though - dont see the point of Hex ot Oct - if 4 can drag the payload then 6 or 8 will just suck the battery down harder? Thoughts here would be good.

Anyway - First flight was fairly short. Lasted all of about 3 seconds and rolled over. It was a bit like a dud shag. Turns out I need to follow the Mission Planner doc for the motor pattern for plugging into the Autopilot rather than reading the 650S board. Props seem to take the hit into the dirt OK. Lesson learned.

Gave it a day and switched out the ESC plugs and went again. Confidence was up but tethered it to the ground this time just in case. Lift off successful. Got it hovering - was nose a little up and heading backwards but put it straight down and high fived myself. Now to learn to log the data and read the output.

After all that - here’s the question … calibration of the ESC’s?

Do the Hobbywing X Rotor 40A jobs need calibrating?

The limited documentation I’ve found is leaning me towards yes. I’ve tried to follow the 4 motor calibration all together at once routine and listened out for the beeps. But I’m not sure it was actually done. The X Rotors send out the steady beeping while the thing is disarmed and its tough to pik the more subtle calibration beeps under it. I tried the one at a time calibration in the CH3 port on the RX8R but similarly not sure that has worked. Might go through the full set up again to be sure.

Got to survive a family wedding this weekend first though. It’s going to be a horror show. Give me strength. 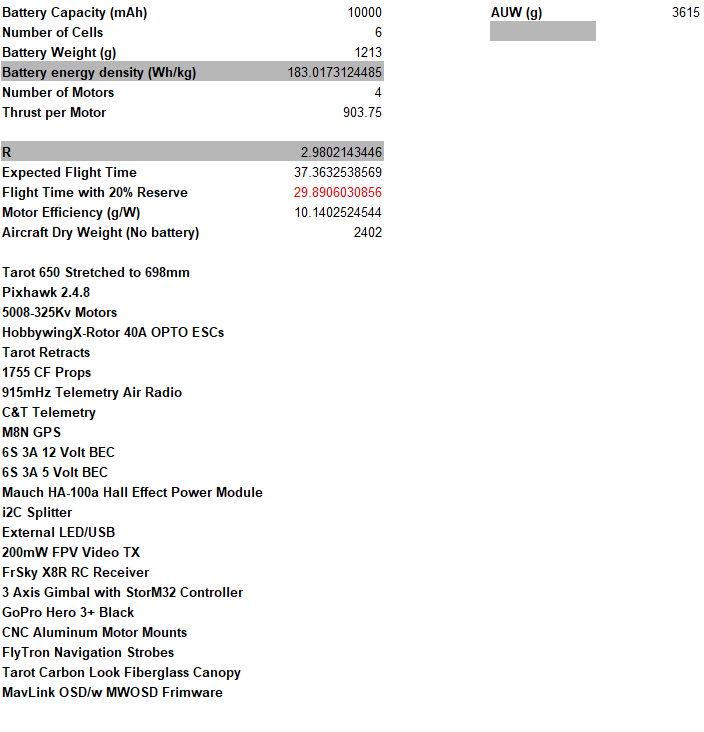 To get this I replaced the stock arms with arms from Tarot 680 Pro Hex.

The ESCs need to be calibrated.

Not sure if MP can control two cameras, I have pan and tilt from my radio mapped to a STorM32 3 axis gimbal controller on this quad, and I have tilt mapped to the RC input on an older AlexMos 2 axis gimbal on a Tarot 680 Pro Hex. 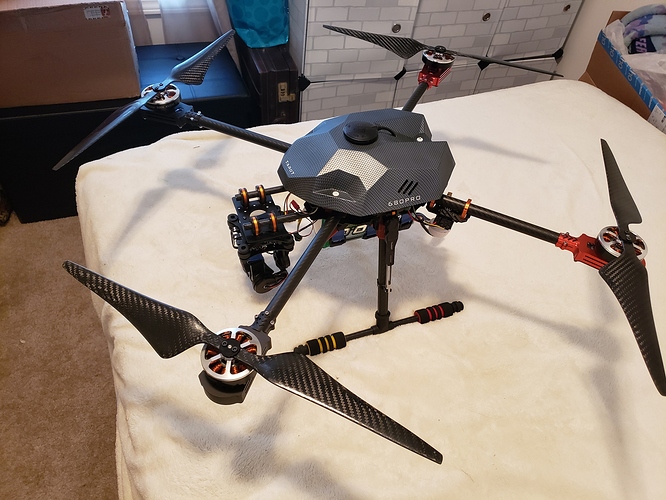 Thanks Gazer. That’s a tidy looking unit. Mine is fairly ghetto in comparison - but I run the show out here in the 'hood plus its 2020 so I’m gonna be me. Still holding some mild envy.

I think I’ve got the ESC’s calibrated now.

Figured out how to log data flash. That is very cool. Might sneak it up in the morning and see if I can log something worthwhile.

Still got a long way to go.

I saw this motor mount in AliExpress and I thinking to replace my Tarot 680 Hex plastic mount by this one. Specially to install ESCs inside the mount. Clean and safe.
My question is: the model of mounts from link above is visually (square) apart from those installed on your copter (rounded). 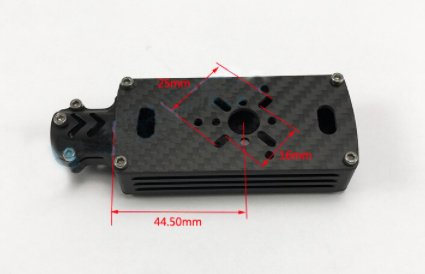 Are they the same?

Is this frame above an Hexa 680 converted (central arms removed) to Quad? Or a 650 genuine quad?

I actually have both styles. I used the square mounts on my 680 Hex and on a 680 Alien quad because I couldn’t find the rounded mounts.

My initial plan was to use 2 black in front, 2 red in the rear, and “silver” on the sides. Here is a link 16mm Motor Mounts .

There are a couple other vendors on AliExpress, but you need to make sure you get mounts that have 3 bolts in the tube clamp. The center bolt goes through the tube and serves as a “keeper” to prevent the mount from twisting and throwing the motors out of alignment. I always save this bold for last. Once I have the motors aligned square to the frame and each other I drill a hole on either side and then carefully pass the bolt through and add the included Nyloc nut.

The quad in the picture is a genuine 650 sport. You can tell by the landing gear… 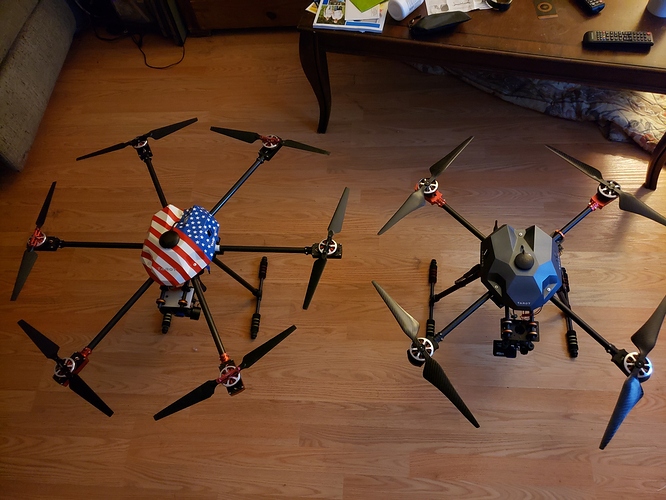 I actually have both styles. I used the square mounts on my 680 Hex and on a 680 Alien quad because I couldn’t find the rounded mounts.

I see, nice! The X-Rotor ESC (40A) fits well inside the rounded ones?

There are a couple other vendors on AliExpress, but you need to make sure you get mounts that have 3 bolts in the tube clamp. The center bolt goes through the tube and serves as a “keeper” to prevent the mount from twisting and throwing the motors out of alignment. I always save this bold for last. Once I have the motors aligned square to the frame and each other I drill a hole on either side and then carefully pass the bolt through and add the included Nyloc nut.

I agree. My frame its the Tarot FY680S, which is a hexa frame before the Pro version. The FY680S original mount already has the clamp with center screw through the tube, which helps a lot to keep the arm aligned. 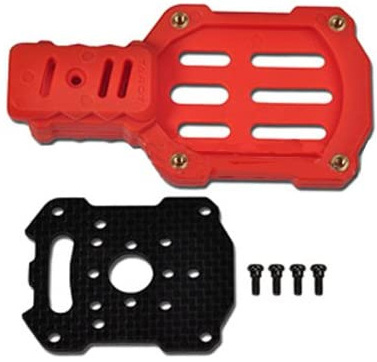 Had some fun lifting it off a half to one metre and landing in the yard this morning. First few were rough.

Got really good at it eventualy. Maybe a few balance issues to tune up but nothing horrible so figured I’d go away and read read about that over lunch.

It suddenly powers a little and climbs 15 metres with no control from me. Really thought it was gone and just as I lost all hope it begins descending gently on the spot. With grace too I might add. Phew.

So I know how to read a flashy data log now. Turns out had the battery cut off a little too conservative. Which is odd for me. Normally push those limits.

Took it down the park today for the first proper flight. Amazing. I love it.

Two or three horrid landings in stabilise mode. Easy to over compensate error and mess it up in that mode. Alt Hold and Loiter working beautifully.

One forced RTL when it got a bit far off and I couldnt tell the orientation. Good that works too.

One unwitting flip when sending it to heaven full throttle but nice to know it recovers with a bit of stick.

Got that on video but the potty mouthed 16 year old son in charge of footage filming let rip the “C Bomb” so cant really share it here. 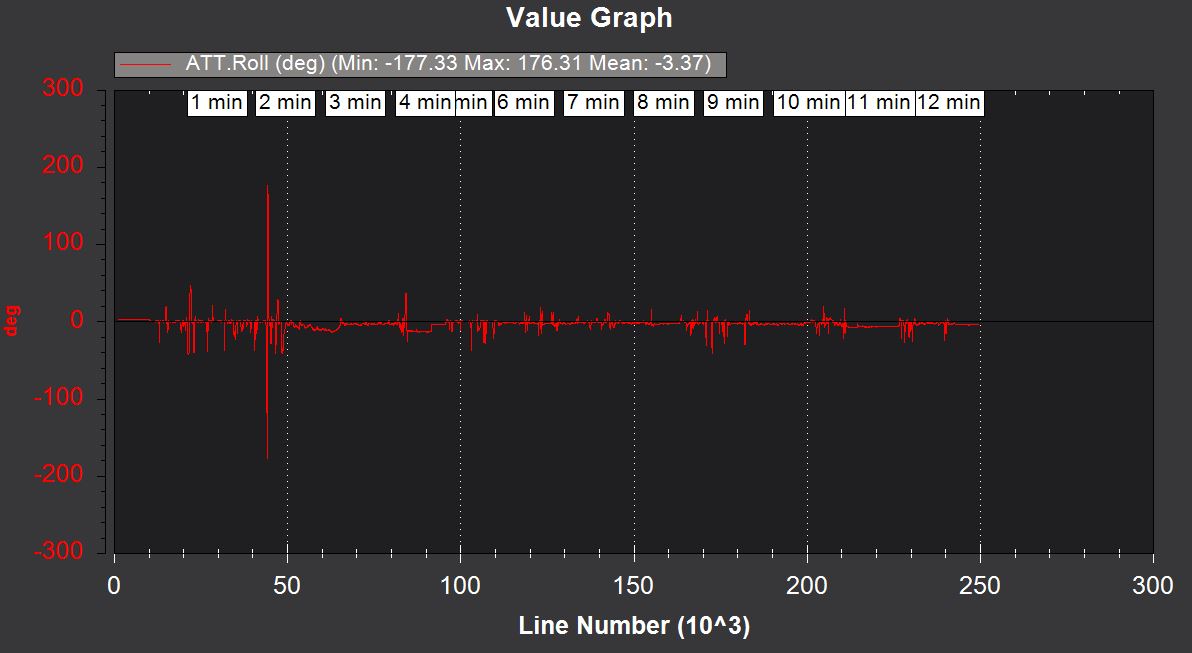 About the Round 16mm motor mounts you are using, the XRotor 40A ESCs fits inside it?

I was looking the internal mount dimensions (79.6mm long), and thinking if it can acomodate the this ESC.