I built a plane recently that maintains “3D Fix” status nicely with about 9-11 satellites (indoors near a window). However as soon as I switch on my radio the status becomes “No GPS”, and the fix never comes back until the flight controller is rebooted. This behaviour is 100% repeatable.

Every component is the exact same thing as about 6 other planes I have that work perfectly fine. Omnibus F4 pro, BN220 GPS module, FlySky 2.4GHz radio, plane 3.9.8. I have also tested with three different GPS modules and two different cables between FC and GPS, with the same results.

Note that this is not about the radio swamping the GPS sensitivity by being too close, because the same problem occurs when the radio is far away. Also when GPS reception is interfered with the status will be “No Fix”, not “No GPS” which means there is no GPS connected at all. When the radio is off and I put the plane in the worst part of my house for GPS reception, I get the expected “No Fix” status.

Any ideas what could be causing this?

EDIT: The receiver is an x6b, and the problem occurs with both PPM and SBUS output. It does not occur when the receiver is not connected to the flight controller. The settings for serial protocols are exactly the same as another plane which I copied them from, which is working fine.

Well, turns out the flight controller board was not the same revision as the others. I ordered three at the same time a few months ago, and Banggood sneaked in an older one, along with two of the version I actually ordered… not cool.

I think this board might be an original v2, which needs to have a resistor removed to disconnect the receiver in from one of the UARTs.

A quick blurb about the BN220:

I got one of these receivers to try (coincidentally with an Omnibus F4 Pro as well) and found the performance to be a bit lacking compared to the larger M8N based receiver on my other plane. TTFF was longer and it didn’t lock onto as many sats as the larger receiver in a side by side comparison.

It seemed the lack of ground plane around the patch antenna degraded its performance. I used some foil tape to make a ground plane and copper tape with conductive adhesive to bond the metal shield on the back of the receiver to the foil plane. 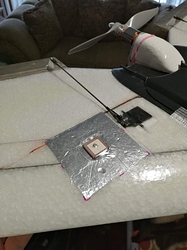 IMG_20191208_141115.jpg3456×4608 555 KB
The ground bonding to the plane isn’t great but it still made a noteworthy improvement in the receiver’s performance. Attached are u-center screenshots of sats ~5 minutes after cold starts with and without a ground plane (tested indoors in the middle of my apartment.) I used the Cold Start command in u-center to force the receiver to acquire sats from scratch. 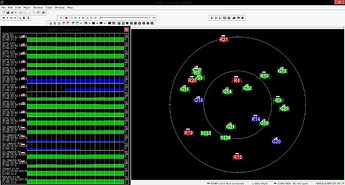 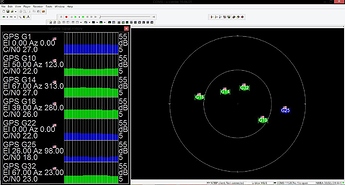 I chose 70*70mm for the ground plane based on the datasheets of a few 18*18*2mm antennas from Taoglas and Molex. Not sure if that’s the right plane size for this particular antenna but it seems to work