Is it possible to set my Skyviper to follow me around as I move?

I guess I should be more specific. I’m talking about the current 2450gps model, not the 2018 Journey model which I see from the early release manual does have a follow me mode. The current model has the ability to locate the smart phone in the video app. You can select Return to Home which takes it to the launch location or Return to Me which will bring it to the smart phone, even if you have moved from the original location but when it gets there, it wants to land instead of hover, and it wants to land heading in the direction it had at launch.

You programmers should be able to tweek this capability into a full blown follow me mode.

using Solex, you can do follow me mode. but it costs $20. Tower used to work, but then Android made a change to the location API and broke it. I know how to fix it, but don’t have the ability to get my changes pushed to either dronekit-android or the Tower repo.

anyways, Solex will do it. Also, the SV’s video in Solex is better. lower frame loss.

Solex has a lot to offer but I don’t have a SOLO. How difficult is it to adapt to the Skyviper 2450gps?

You go into settings, change default type to SV 2450 GPS then connect. It
is already designed to work perfectly with the SV and it’ll let you switch
to any mode you want without having to change transmitter buttons. Right @kellyschrock?

Android only. Too bad.

only for iOS users.

Is it possible to set my Skyviper to follow me around as I move?

Also, the 2450GPS will already do it using Solex. It used to work with Tower, but Android changed somethign in their Location API, which caused it to stop working. I started a PR to try to fix it, but it takes fixing both a Tower component and a dronekit-android component. And Tower dev is basically non-existent.

I hadn’t heard of Solex. $30 is a bit steep but it does look nice. Does the video feed happen to work with the SkyViper?

It does. I’ve been having issues with the latest version, but still a good
App that is actually maintained by the developer.

Thanks. That sounds even more interesting then. Has the developer explicitly expanded the scope of the app to include non-solo use? Or is it just working to the extent that generic mavlink protocol is used?

What are the issues you are having in the current version? It’s not normally possible to get an older version and while I might be willing to pay that much for something that works well, it’s way too much for just an experiment.

It has a specific setting to tell it whether it is a Solo or a Skyviper. And then it also has a “Generic” setting as well which will just operate off the available MavLink connection. The solo and Skyviper setup works with the Solo and SV camera controls and such though, which is nicely integrated.

I’m having issues with sometimes the app crashing, but only when i’m using my skyviper. I think the issue might stem from my SV being loaded with AC 3.6 R2, rather than stock…but i’m not sure. I don’t get enough time to test scenarios. Generally, when I have time to fly I just go outside, throw it in the air and go! lol

To be complete, I’ll say that I use Tower more than I use Solex, mainly becuause I can use it to do auto-missions for free…
Solex is great though, because the “voice prompts” work (Tower sometimes doesn’t), also Follow-me works, and of course the video works! 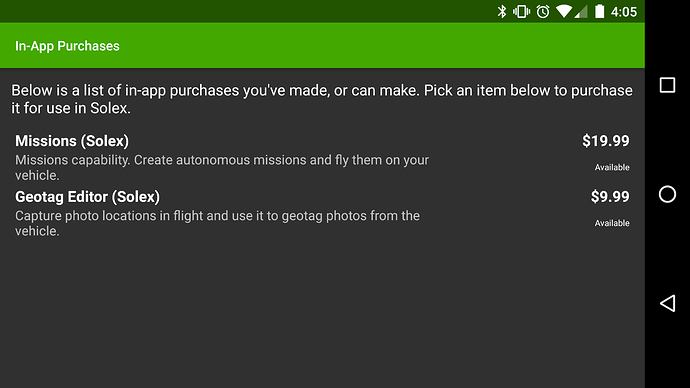