Fly away when high vibrations ... luckily that caused an EKF failsafe, and it decided to land

My small 5" quadcopter running Arducopter V4.0.4-rc4 was flying fine in Stabilize mode but the second I switched it to POS Hold it took off for the moon. I panicked a bit as it was quickly going out of site and disarmed. Thankfully this was over soft grass with no one around so it came back down with a thud and remarkably nothing broken.

Not seeing how to attach the log file but here is a Dropbox link:

What’s immediately jumping out at me is GPS.VZ. I can’t find a definition for it but it sounds like vertical velocity and the negative numbers don’t seem right.

Tlog isn’t much use, can you post a .bin file from the Flight Controller?

The copter was never in Stabilise, only PosHold.
You gave it full throttle and it responded with full power and a fast climb
The EKF final went into fail safe and switched to land.

A simple hover for a minute or two in Stabilise would tell us a lot more.

You’re right, I forgot which flight it happened on. I took off in PosHold to about 10 feet and then switched on AutoTune and that is when it shot skyward.

I took the liberty of change the title of the post

Thanks for the help guys.

I will remount the FC tomorrow, hover a bit on Stabilize and repost a BIN file. I’d obviously like to avoid another fly away.

How would I “tune the notch filter”?

If you set this you wont be able to take off till you’ve got a good 3D Fix, and therefor much safer to use poshold and loiter modes. Autotune also relies on GPS to stay in position.
FENCE_ACTION,3
FENCE_ALT_MAX,120
FENCE_ENABLE,1
FENCE_MARGIN,5
FENCE_RADIUS,600
FENCE_TYPE,3

The place to go for tuning the dynamic notch filter is, as always, the extensive wiki.

I’ve remounted the FC and cleaned all the motor bearings and it feels like vibrations are back where they should be. I’m still terrified to put it back in AutoTune but I’ll make a trip to my local huge park in the next few days.

Thanks for the log, I think this is a situation where the vibration failsafe did it’s job well.

Soon after takeoff we see the classic signs of the EKF losing it’s altitude estimate because the climb rate becomes a whopping -20m/s (i.e. falling like a stone) while the barometer reports the vehicle is actually climbing (consistent with what the pilot says). The EKF failsafe + vibration compensation trigger and the vehicle recovers in Land mode. Land modes requires the altitude controller to work though so it only works because the vibration compensation has kicked in. 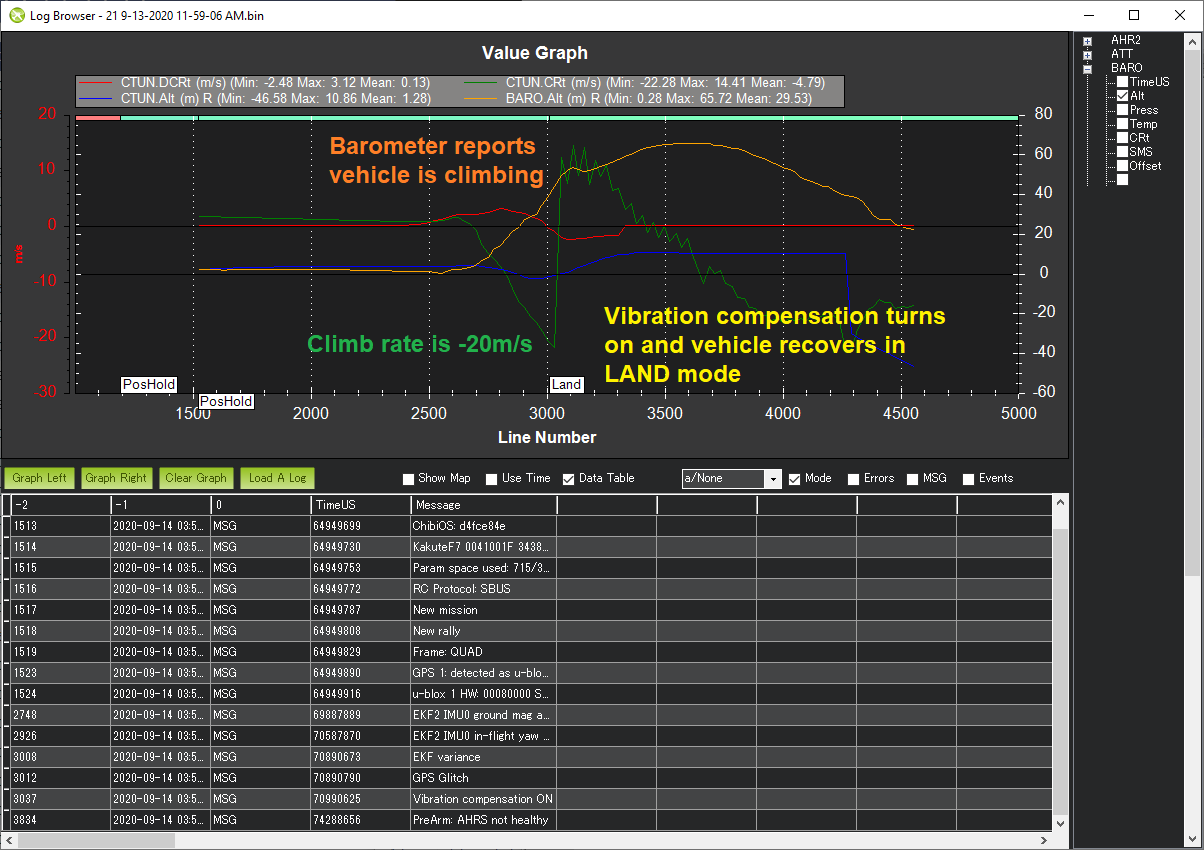