Recently I rebased the master branch of my repo to bring it up to date with ardupilot master branch. When I go to compile using waf, I get the following error 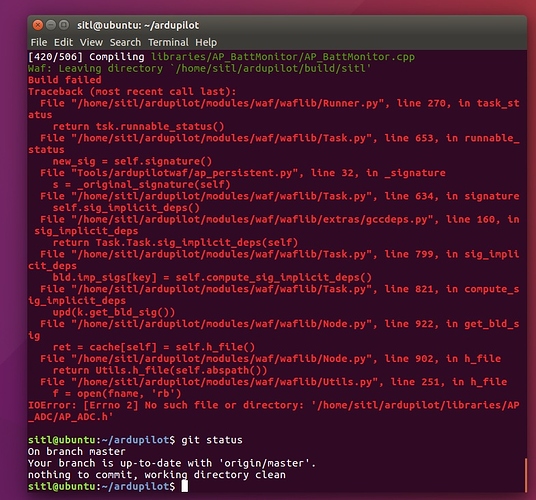 any help in resolving this issue would be greatly appreciated.

I did a git submodule update --recursive. when I do “git status”, it says i’m up to date.

Bill, I just fetched and rebased on master and did a sitl build for heli and it worked fine:

Did you check to see if the analog to digital converter library header file is actually missing? It appears that’s what is b()rking the script, looking at your traceback.

Did you check to see if the analog to digital converter library header file is actually missing? It appears that’s what is b()rking the script, looking at your traceback.

No. But I just did a px4-v2 build and it worked fine. I will check for that header file.

EDIT: So I checked for the file and it is missing. So why didn’t that get loaded when i checked out master?

I don’t know. I think what I’d do is push -f to your repo and then look at the history to see when that file disappeared. Or how it disappeared. You can always fetch it from master and replace it. But if something got messed up in your git commit history where it got deleted on your end, then it remains part of that commit and when you rebase it just rebases master on your local changes. So it won’t pull that file if it accidentally got deleted and then you did a “git commit -a” at one point and didn’t catch it.

So the file is supposed to be deleted. It was done in this
PR to remove AP_ADC.
It also removes the include statements from the various libraries that use it. So I’m not sure why it is still being called. I might try doing a hard reset and rebase on master again. Hopefully that fixes it.

I just pinged @tridge on Gitter to take a look at it. There’s a problem in the python scripts for some of the builds.

I can build for fmuv5 but if I try a CUAVv5 build it fails with the same error Bill got.

The dependency code isn’t coping with the removed file. The quick fix is a clean build, or for completely clean, do this:
rm -rf build

Yeah, force removing the build directory “fixed” it. I had tried a ./waf clean and git submodule deinit and re-initialize the submodules but that didn’t do the trick.

@tridge thanks for getting me back on track!