I want my lights to come on at waypoint 2 (see attached screen shot of Mission Planner) and go off at 4.

Waypoint 3 is the DO_SET_SERVO command.

Have I done it correct or is there another command to turn them off again? I am using a receiver controlled switch which works well.

Also, do I need to remove the lat and long coordinates from the DO_SET_SERVO command? 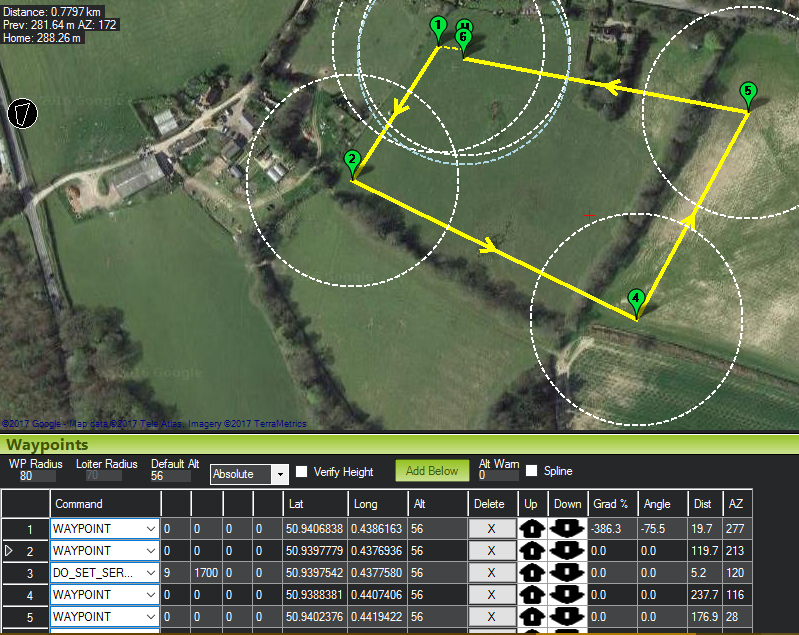 OK, so where would I put the second DO_SET_SERVO command?

Would it go before or after waypoint 4. I want the lights on between 2 and 4 on the above mission planner.

Still not quite sure how it works as my waypoint 3 which is the first DO_SET_SERVO command doesn’t show in mission planner.

at waypoint 4. Basically you want the Lat/Long for the DO_SET_SERVO commands to be close to / the same as the nav waypoints they are associated with.

Last question… Any idea what the switching PWM value is for a Turnigy receiver switch? I can’t find any documentation and have no idea what ranges are normal.

Thanks. I’ll try it out Monday. Too much wind and rain until then.