I’m having a bit of a weird issue on one of two Cube Oranges. Both are running on X8 frames, with AC4.0.4. To summarize, while completely stationary on a concrete floor, roll and pitch experience significant oscillations and drifts. Unfortunately, I’m restricted from posting entire logs or parameter files, but I can post screenshots and individual parameters as needed.

Screenshot attached is from a log taken while stationary (LOG_DISARMED=1) for quite some time. Again, the aircraft is left alone on a concrete floor for the duration of this log. I have a second Orange cube, and multiple Black cubes, none of which seem to have this issue.

Recalibrating the accelerometers doesn’t seem to have any effect other than the instant reset-to-zero; the error returns afterwards. Aircraft is in stabilize mode the whole time, and indoors (i.e. no GPS fix). We have two Here3 GPS’s on CAN1, using the I2C expander as a CAN expander for an easier time with the static node setup.

Has anyone else encountered this? I couldn’t find anything online about either AHRS drift, IMU drift, or something else. 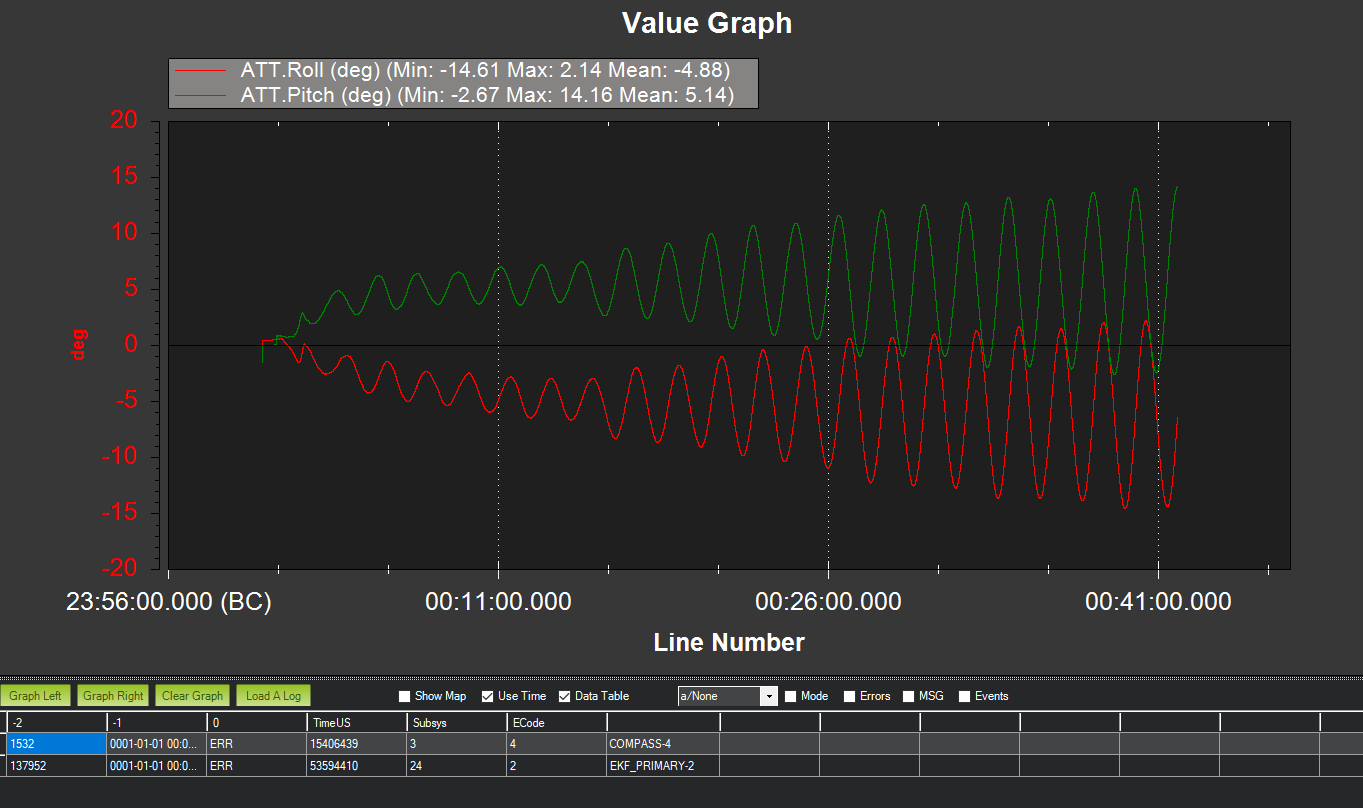 The sensors do drift over time without an external reference (gps velocities most of the time) to calculate corrections from. I suspect you’d find that if you had gps fix, this wouldn’t be apparent. A thermal calibration can reduce the extent, but that’s not in a stable release afaik

I’ve heard that as well, although I was surprised to see just how quickly it happens. The first deviations from level become noticeable on the HUD after barely 30 seconds. I’ll try again outdoors with a GPS fix next chance I get (tomorrow or Wednesday likely), but out of curiosity what temperature ranges could the thermal calibration help? Albeit currently quite warm, it’s quite common to have a daily high temp below 0F where I am.

I’m back with more questions than answers.

(First off, apologies for taking so long to get back to you - the weather didn’t cooperate)

I’ve now replicated the setup of this aircraft completely from scratch and it went with great success. Part of the setup procedure included a large vehicle magcal, which I did earlier today on the second aircraft, and it completed successfully. I then left the second vehicle outside for about 20min to see if any gyro drift was picked up and got nothing at all (yay!).

I then took the original problem aircraft outside to do the GPS-lock test and a compass calibration. During neither of those processes (it was also outside with a good constellation for at least 20min) was any gyro drift observed.

Now, bringing problem aircraft back inside (and out of GPS lock), I can’t get the issue to repeat! Even without a GPS lock (inside a metal building, with a tinfoil hat on the GPS’s) it now won’t even start to drift off level.

I can’t wrap my head around why this would be, but is it possible that doing the compass calibration fixed this issue? I had done a calibration on the one internal compass before it was on the aircraft, but this was the first time it had the external compasses calibrated.

Issue turned out to be due to low voltage going to the Cube. Seems like dual Here3’s in addition to the Cube and a Holybro telemetry module collectively draw too much power and winds up undervolting the entire system… all bets are off then. As soon as the battery was reconnected, the drift went away! (Even without a GPS lock).