Crash -- Pitch control stuck after switching out of AUTOTUNE

Hello there,
been flying Arduplane 4.1 beta3 (FC: MAtek h743 wing, plane: volantex ranger EX) and wanted to autotune the vehicle. Shortly after take off, I switched to autotune 00000013.BIN.param (17.1 KB) mode, however, due to bad weather conditions (thuderstorm approaching) I switched out of Autotune to FBWA when I noticed I was unable to control the pitch. Then I switched to manual mode and no luck there, too. After crashlanding, I discovered, that the issue was that the elevator was full way up and was not reacting to pitch control. After rebooting the FC, I was able to move elevators with my pitch controls as usual…
What could be the cause of this?
The link to the log:
https://drive.google.com/file/d/1PGBgw-T3gYA7rwAL4fRMh1uNs3rq3n9E/view?usp=sharing
https://drive.google.com/file/d/1QqboWercBcPvMK9VmZhJHF1xA1uT6tq4/view?usp=sharing
Thank you for your help…

Can you attach a screenshot of the graph showing that you were in manual mode and RC out elevator was differing from RC in?

It is scary to think that it would be overriding you, even in manual. 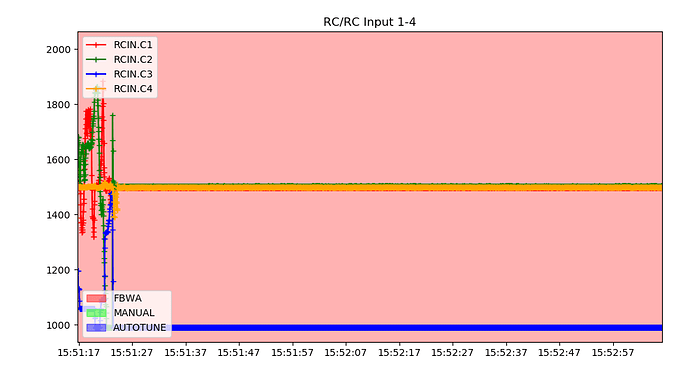 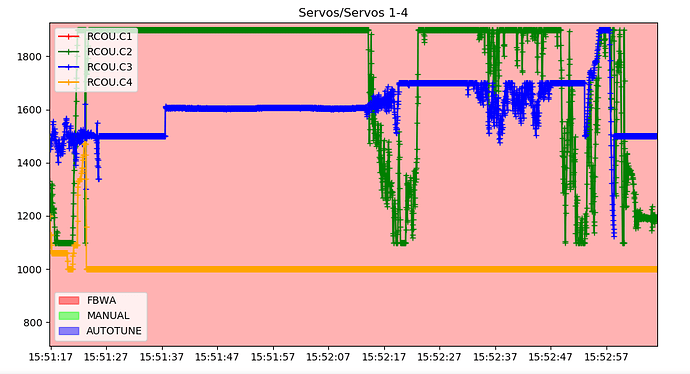 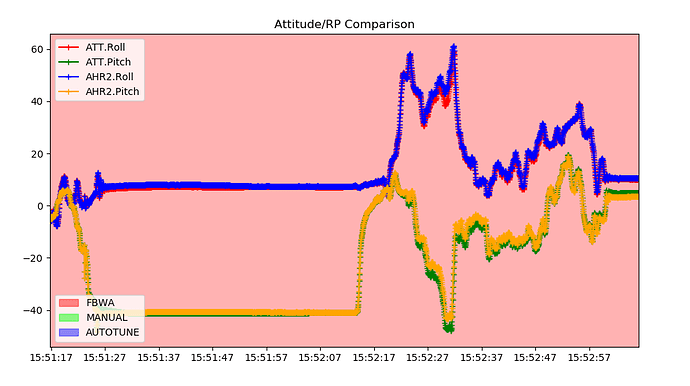 The attitude shows that the plane desired action via actual are the same. that means the board was in control and the accident is mostly not external. 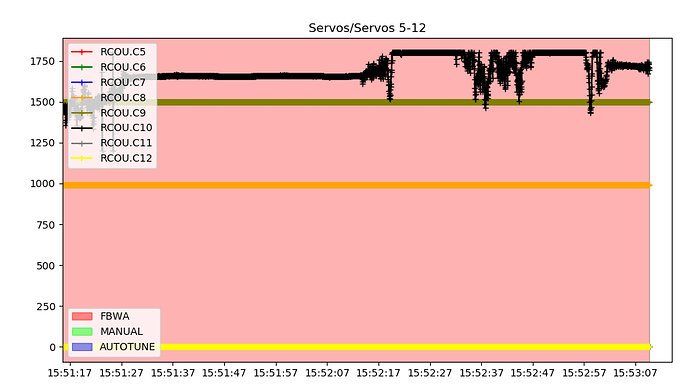 Meanwhile RC input throttle is low and all signals are 1500. I am not sure but is this a sign for lost RC signal and the RX switched to safe mode ?

In the first part of the flight the pitch response looks pretty good. The elevator is a touch on the high side, but not enough that it can’t be tweaked or a C of G adjustment made.

Then at about 380s things start to go off. The plane becomes very unstable in pitch. From that point it continues to pitch up and down. Even when you’re running autotune it doesn’t seem to be following the demanded pitch inputs very well. The servo output seems to be following the desired pitch, but the actual pitch isn’t responding well.

In my opinion the servo output is (very) active through out the flight, right to the end. Even in manual mode the plane was responding to the pitch inputs, and I can see servo output following the stick input.

To me, it looks like a centre of gravity issue. Probably too far back. In the end the plane keeps trying to pitch nose up and you are trying to push it back down. Given the plane started off flying well I’m wondering if something moved or broke loose in flight or during the auto tune movements. Or, some kind of mechanical issue with the servo/elevator. I don’t believe it was a flight controller issue.

thank you for your input. I discovered that the pitch control problems were caused by elevator servo failure. I tested the servos behavior on the bench: it works fine except in the moments when PWM signal is set high (>1900) or low (<1100). If the conditions are met, the servo stops responding to PWM signal and requires a reset. I suspect that I strained it too much during pitch autotuning procedure.

Thank you very much for your analysis…

If it’s a cheaper servo it’s possible the gears inside it stripped a tooth. Either way that one’s fit for the bin. If you’re worried you could probably afford to dial down the travel a bit to prevent over driving the next one. (1150 - 1850)