Can a ESC low voltage failsafe cause a motor to stop midair?

Hi all, I was just running an autotune on my first Ardupilot hexacopter when it lost control and finished up in the rocks. Thankfully not much damage. It was stable and okay with the PID parameters it was running at the outset.

I thought I could hear an alarm of some kind from the buzzer and I later saw the GC reported potential loss of thrust (6) and then (3). Things went awry at about 13:06 by the graphs. It had been twitching happily until that moment.

The battery is 6S and the calculated VoltR was still almost 23V. Or should I also pay heed to the raw voltage being 21.5V… maybe it just ran out of steam?

From the servo graph I’m guessing motor 6 has shut down? It’s PWM is at the maximum limit while the opposite motor 5 is being commanded for very low thrust. Is this what you see as well?

All motors spin fine when I try them now. What is the likely culprit? Perhaps the ESC went into a low voltage failsafe?? They are 30A HobbyKing ESCs and the total current drain hovers around 15A so ~2.5A/motor. It’s a 4000mAh 10C TBS battery. 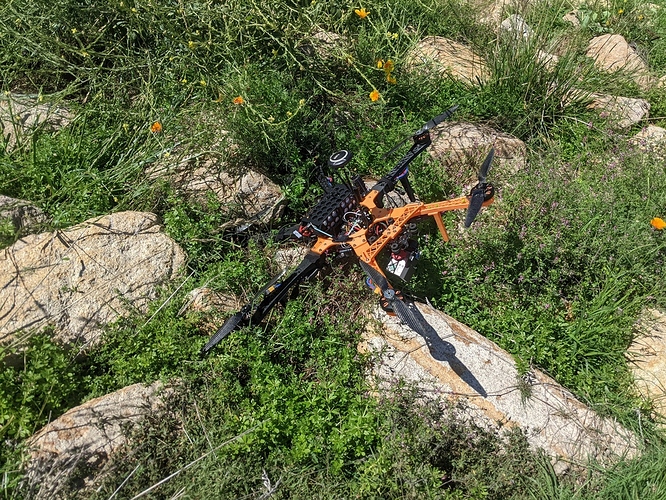 At 21.5 you were running out of gas. But from your graph I’d say ESC/motor failure.

I’ve just used a programming dongle I have for these ESCs to further reduce the voltage when their FS mode is triggered and I’ll also run with two of the batteries in parallel. That was my plan anyway, but I thought I’d try with one initially.

If the theory about a low voltage caused an ESC shutdown is correct then this should resolve it. I’ll also increase the low battery RTL threshold voltages.

Verify that your voltage monitor is accurately calibrated, then turn off the ESC low voltage cutoffs completely, or set them very low so they will never interfere.

I’m going to second what Shawn has said about the ESC cutoffs. Turn those off. ESC voltage cutoffs are for RC planes that don’t have proper voltage monitoring.

Thanks Shawn and Allister. Unfortunately I don’t seem to be able to completely disable the low voltage failsafe on these HobbyKing ESCs, but I have set it to 2.8V/cell rather than the default of 3.2V/cell which should be the end of the issue as the RTL failsafe etc. will prevent the battery getting that low.

Thanks for the spreadsheet, I have just updated some of my parameters based on that. Very handy.

Well this time it got smashed to pieces

I think it has to be some kind of ESC issue? I see there were ‘potential thrust’ warnings from 2 and 5 not long after takeoff when the, now dual, batteries were still ~22.5V under load. So I don’t think it is a low battery ESC failsafe that is causing the thrust loss.

If the PWM were driven beyond the maximum PWM that was set during calibration might the ESC reduce the power to the motor, rather than run it at the maximum? I ask this because when I was previously flying with PX4 I tried pushing some of the MAX PWM settings higher than what they were set to and seemed to have a similar loss of power.

I see in my MOT_PWM_MAX and MIN parameters are both 0. I’d have thought they would be set to the number used for ESC calibration, but maybe that’s in other parameters? Maybe I’ve recalibrated the RC/throttle since programming the ESCs?

I’ve never had any issues flying it manually, but as you can see from the graph, the autotune is pushing the motor servo outputs to the limits whereas I fly like a grandma.

Very sad. I was hoping I was at the point of being able to stop building and start flying, but it seems there’s still something pretty fundamental wrong.

Thanks for any suggestions. 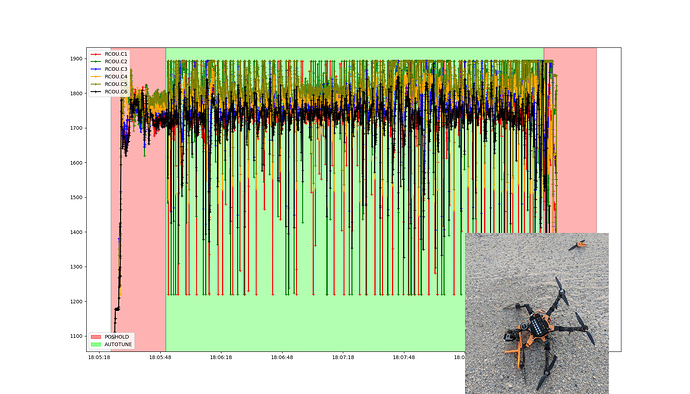 An admin has changed the title of the post and locked it?

How about this theory - they’re 400Kv motors. Maybe at peak PWM the ESC is trying to drive them too fast and the motor can’t keep up with the alternating drive voltages? So if that’s the case I should set MOT_PWM_MAX to a number which the motors can achieve (which is my case obviously needs to be something less than the value of my RC_MAX)?

yes, I did that. It better describes the problem.

I guess your problem now is that the craft is either under-powered, or your batteries are too old and developed high internal resistance.

No, motor not keeping up with ESCs is not a good theory. Copter too heavy (under-powered) is a better one.

Please do Alt-A in mission Planner and follow the instructions!!

It looks underpowered/overweight to me. Here at a hover before Auto Tune starts your average commanded motor outputs are ~1750.

And during Auto Tune there is insufficient thrust for the maneuvers, commanded outputs at max, thus the Thrust Loss messages. Your own graph shows this.

I think Mission Planner is only available for Windows.

I’m not really convinced that this is really an ESC low voltage cut-out as the title now reads. That was just a theory I mentioned while asking for advice.

I appreciate your experience and suggestions.

With my limited experience, the odd thing is that the copter has ample lift flying in manual when the PWM is in the mid range and the battery discharge keeps up with the demand, beyond the current draw that is logged during this autotune, such as during a generous throttle-up. It seems so far that the problem occurs when any individual motor is driven to the PWM limit. This also fits with what I mentioned about experimenting with the parameters under PX4.

Of course it could also be interpreted the other way that the battery/motor/lift is inadequate as you suggest, and that’s why the PWM is being driven to the limit. Cause and effect… I agree your statements makes more sense from that perspective.

Conversely, there were a few instances where it lost some altitude during the autotune and reported a potential loss of thrust even before the batteries were run down so far, such as the one around 18:06. During these episodes one or more of the motor PWMs were at the limit at the start of the altitude drop.

I appreciate both of your advice Amilcar and Dave that it may just be underpowered. It has 3508 400Kv motors running off 6S but at the moment it only has 10" props. Hopefully the 11" will arrive tomorrow which should at least be a step in the right direction. I might also experiment with winding the MOT_PWM_MAX back a little to see how that goes, if nothing else I might prove myself wrong

I appreciate both of your advice Amilcar and Dave that it may just be underpowered. It has 3508 400Kv motors running off 6S but at the moment it only has 10" props.

What is the Take-off weight with the battery?

~3.3kg during this flight which included the gimbal and camera as well.

I don’t think 11" props will do it. The kv of the motors is too low for this application. Which motors exactly?

I see I neglected to include all 6 motors in my graph but same outcome.

My intention was that it would have thrust to weight in surplus… but I’m new to the game. The long range Discovery I’ve got has several kg of excess lift capacity running 4xT-motor 3508 380Kv motors, but then it has space for the 14x4.8 props.

What? 2 different motors? Not much more to add. Underpowered/overweight and I don’t think 11" props will get you there.

I suggest you buy a subscription to eCalc and check it for yourself. The goal is the Motor @ Hover Throttle (linear) to be ~50%

No two motor responses, motor orientation, motor geometry wrt CG are ever identical or perfectly symmetrical. Such is the beauty of a closed loop control system. I would have preferred six of the same motors of course, but I couldn’t source the two extras. I’m not that would be a show stopper?

For now it at least flies and climbs nicely even with the 10" and the current PID parameters, so I don’t think it is an altogether lost cause, but my attempt to try out autotune push it into a regime where problems arise.

As you say it’s working quite hard even at a hover. Whether that under-poweredness or battery internal resistance or motor torque non-linearity at high ESC PWM duty cycle ultimate reason for the loss of thrust - as to opposed reasons why the performance may be less than optimal - is something I’ll try to figure out.

Thanks again for your input.