@tridge, first think I need to say is I’m pretty pleased. Thank you for all the hard work you and the other devs have put into this. This is the first time I’ve been pleased with an autotune on this wing.

So you commented you wanted more tuning data so here it is:

Prior to Flight 1 I did a basic upgrade from 4.0.7 to 4.1.Beta3. I did not reset the tuning or make any changes there. The original tuning on this plane was safe, but poor. I fly this plane FPV in manual mode, so as long as the auto take off was functional and FBWA was responsive enough to get me back on the ground safely I wasn’t too worried. In 4.0.7 I had set the pitch and roll D-term to 0 because I could not get rid of the oscillations and I got tired of fighting with it. So, the plane went into Beta 3 with 0 D-term.

I was pretty pleased with the performance after Flight 1. It seemed to be handling very well. I noticed no bad tendencies. I had a quick look at the logs in the field and I felt there was room for improvement so before Flight 2 I adjusted AUTOTUNE_LEVEL up to 7, from the default of 6. After running auto tune in Flight 2 I played around in FBWA and I was very impressed. Bumping up the autotune level seemed to really help.

I posted the log for flight 3, but really that was just me enjoying a wonderful evening of FPV in FBWB mode. A pretty simple flight but boy it felt good.

I noticed while using auto-take off on flights 2 and 3 there was some oscillations right after I threw the plane. I didn’t notice anything during the flight but it was there. Nowhere as bad as I’ve seen on this plane in the past after an auto tune, but it makes me think the D term is still a touch bit too high, particularly in pitch. It was a pretty calm evening so it makes me wonder on a windy day if I might not be tuning D down a little bit more. Or would it be worth turning PTCH_RATE_SMAX down a bit?

Thanks again to all the Devs!

I had a chance to tinker more with the wing today. The pitch oscillations were most noticeable during the auto take off. I couldn’t really notice anything in flight. To be fair, these oscillations were far from horrible, and I’ve seen significantly worse on this same plane after autotune on 4.0.7. 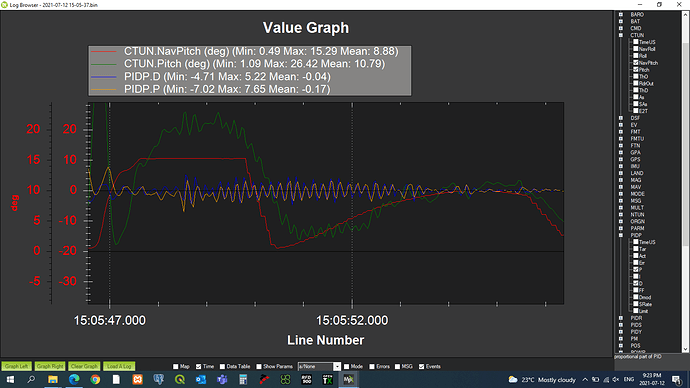 In the past to get rid of this I was turning down the D term and that worked but I wasn’t happy with the final tune. So today I tried PTCH_RATE_SMAX. According to the wiki this should limit or prevent the oscillations resulting from P and D. I adjusted it down from the default of 150 to 140. 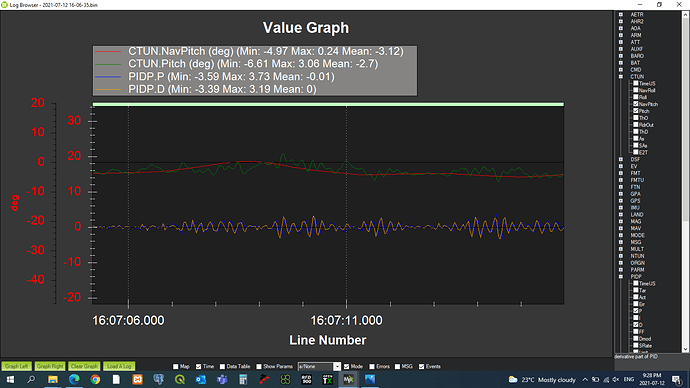 I did four or five more take-offs after that and I didn’t see any oscillations. Looking at the logs I also couldn’t find anything too troubling. I can still see some oscillations in P and D term, but they aren’t enough to translate to anything on the plane. Qualitatively flying around after I didn’t notice any change in performance and I’m still pleased with the overall tune from autotune.

I’m having real trouble getting my ARWing flying in FBWA with out oscillations. Would you be able to share a screen shot of your pid tune after the auto tune?

I’m out of town right now so I may not have a copy of the parameters with. I’ll check my laptop later today and if I have them I’ll share them here. Otherwise I’ll be 10 days before I’m back in reach of the plane.

Have you tried the new auto tune in Beta4?

No I’ve not tried the autotune in Beta 4. I need to sort the tune out enough to get it flying without oscillations before I can even auto tune it!

Here’s my parameter file after my the third flight I mentioned above. I haven’t done any tuning to the plane since then. This is all based on Autotune in Beta 3. I haven’t tried Beta 4 yet. 4 is supposed to be better but I’m pleased with 3.

Normally I wouldn’t recommend using someone else’s PID values blindly, but as long as you’re aware that your numbers will be different then this should be a reasonable starting point.

Sorry this has taken a while to get back to. Just to clarify, this is an AR900 wing, not the newer AR Pro. 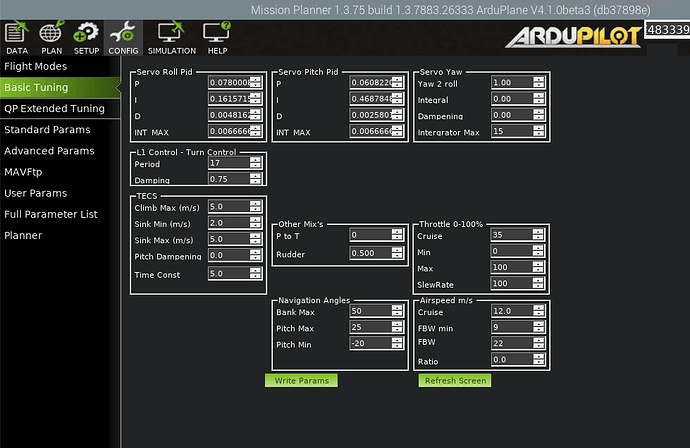