I encountered a problem regarding the plane maintaining target bearing during AUTOLAND, which I can not solve on my own. I have thoroughly used the search function and not found a solution.

The problem is that the plane does not maintain the bearing from the last waypoint to the landing point very well. It rather oscillates around the target bearing with the oscillations getting bigger over time. Also visually, I noticed that the rolling of the plane to correct for these course errors seemed too slow. This is not the case during normal waypoint navigation.

At first I thought it might be the stall prevention kicking in due to a landing speed being too close to ARSPD_FBW_MIN (min speed is 9 m/s, landing speed was at 9.7). I therefore increased the landing speed but the problem still persisted.

It then came to my mind, that I have configured flaperons, that automatically deploy during automatic landing (0.5 mixing gain). They are very useful for reducing speed during approach. Looking at the log, it seems, that the oscillations start after the flaps deploy. I reduced the amount of flap and the oscillations seemed to get less. I conclude, that the Roll Gains that work well during normal flight are too low during when the flaps are deployed.

My questions now are:

-> Do you agree with my conclusions?
-> Is there a way to specify different gains for a non-flaperon and a flaperon-deployed state?
-> If not, do you have an idea on how to solve this (I know I could just not use flaperons, but they are very helpful in maintaining the glideslope)

-> When the landing approach starts, there is always a drop of roughly 10 m in hem (marked in graph). Can anyone tell me why this is? 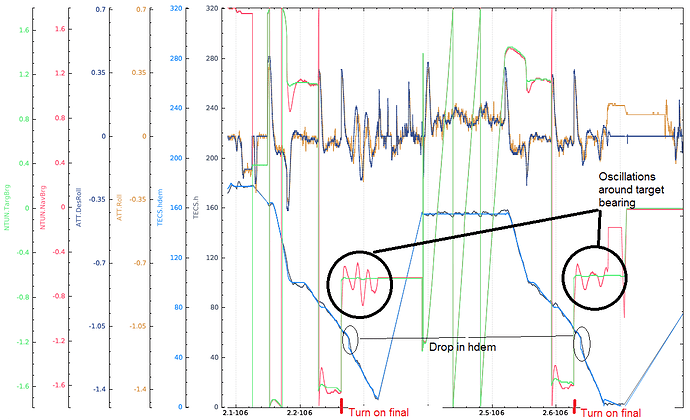