Auto mode excessive and sudden nose down, resulted in crash

I was out in the field testing my autonomous flight speed of my quad for a race.I first did a loop with spline waypoints at 100 cm/s with an acceleration of 70 cm/s2. It seemed too slow so i bumped up the speed to 200 cm/s and acceleration to 100 cm/s2 and gave it another go. It was going upwind when the drones ground speed seemingly went to 0 (without much of a pitch down might i add, seemed like it wasn’t really trying). Then suddenly the craft did a nosedive. I first gave a land command but quickly activated the motor kill switch as it lost control. Could someone analyse the video and flight logs and tell me what i did wrong? (The files named 2021-09-03 13-18-06.bin and 2021-09-03 13-12-09.tlog are for the first successful flight at 100 cm/s speed, the files named 2021-09-03 13-36-10.bin and 2021-09-03 13-35-15.tlog are for the second flight at 200 cm/s in which the crash happened.)I also had another anomaly during my first flight where the servo for the dropper on my drone which i configured as a camera shutter didn’t activate on the DO_DIGICAM_CONTROL command on my mission, but it worked when i manually activated it with the shutter switch on my remote. What could be causing that? (I could add a video of the first flight if required) Thanks in advance. (Note: I am using an omnibus f4 v3 pro running arducopter v4.0.3 if it helps)

It’s probably an hardware failure anyway, but it is always advisable to use the latest stable version, because it fixes bugs and has a very low probability of introducing regressions.

Some bugs are not affecting you today, but might affect a future flight.

That is not logical. Update to the latest Beta version, there are enhancements relative to your goal,

Is there any indication i could get on what sort of hardware faliure that could have been? Auto analysis says that my magnetometer had a sudden magnetic field strength change, but i suspect it could have happened upon impact with the ground. Could you please review my dataflash logs?

I have reviewed the flight footage a little closer and it kind of looks like the front right motor suddenly looses thrust. You can see it spinning slower than the other propellers as the drone tumbles down. I fired up the same motor now and it seems to be in working order. What could be causing such an intermittent fault?

Better than feed you fish, I will teach you how to go fishing: https://www.youtube.com/watch?v=WcfLTW_qZ08 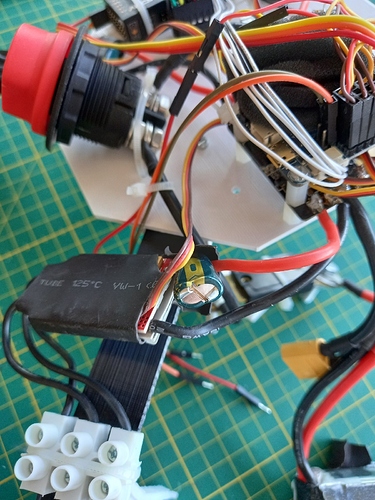 Seems like this pancaked capacitor on the front right esc may have been the culprit. Previous pictures indicates it happened 5 flights ago. Not sure how i flew 5 flights without anything but had an issue on the 6th. There was a brief full throttle given to this esc before the crash, maybe that caused too much noise and gave the esc microcontroller a brownout. Anyways that seems to be it. Thanks a bunch. Any idea why the DO_DIGICAM_CONTROL might not have worked?

Dont use those screw terminal blocks either. Solder and heatshrink is the way to go.
If that switch is for main power or something like that, get rid of that too

I think you are correct. Motor 1 stopped, the flight controller commanded it to maximum output
and Motor 2, it’s opposite, was commanded to minimum to try and compensate

Your battery voltage goes terminally low too, so the ESC could have shut off because of low voltage.
Make sure you battery voltage sensor is accurate, escpecially at low voltages like 10.0v
Connect to MissionPlanner and press Alt A to set some more initial parameters including some battery related settings.
Also definitely set these:
BATT_FS_CRT_ACT,1
BATT_FS_LOW_ACT,2

Thanks a lot, the switch and breaker are unfortunately required by the competition hosts. I will definitely be getting rid of the terminals though. How low is terminally low? Afaik 9 volts on a 3s lipo is acceptable.

9v is too low for 3s lipo. Everyone has their opinion but I don’t go below 11

Afaik 9 volts on a 3s lipo is acceptable.

Not by many that want the battery to survive many discharge/charge cycles. 10.2V is a good low but it depends on the battery. What recovery voltage is the battery at when 85% has been consumed?