AT "in the middle" Config 2 -- Not working Pls help

I am building the Antenna Tracker “in the middle” Configuration 2 as detailed in Ardupilot Antenna Tracker Explanation & field test VIDEO (under ardupilot.org/antennatracker). The video shows the use of 2 radio transceiver pairs as wireless Drone—AT & AT—Ground PC links.
I am doing bench testing and my purpose initially is to get the 2 servos moving on the bench, before building a complete AT.
Here is my set up :–
 Quad with Pixhawk as FC, APM2.6 flashed with Antenna Tracker V1.0 as the AT controller, and PC (a laptop) running Mission Planner as the ground station.
 A pair of radio transceiver (both are Air modules) links the quad’s FC to the AT controller APM2.6 (at UART port).
 A GPS and a compass are also connected to the AT controller.
 The PC GCS is linked up to both the quad and the AT controller by a Ground Module of a radio transceiver via USB port, all three modules use the same Net ID. See attached diagram(GCS PC not shown).
 2 servos are plugged to APM2.6 output channel 1 and 2. APM output is powered by 5V to power the 2 servos.
After power up the quad and the APM (using another 5V supply at input), moving the quad cannot get the servos move, whether connecting GCS PC with USB cable to the AT controller or not, the servos still don’t move. The green lights on both the Air Modules of the quad and the AT are steady, meaning the link between them is established.
My questions are :– 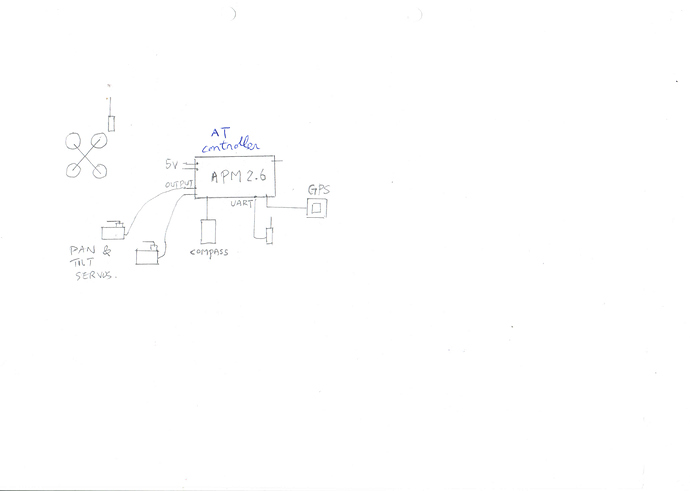 I try to answer some of your questions.
If nothing has changed APM2.6 is not supported by the latest versions of the AT firmware anymore. Even if you select 1.0, MP will flash 0.8 or something. This is also the reason why the ALT source parameter is greyed out, the parameter is not there in 0.8.
The APM2.6 needs to be mounted on the moving part of the tracker. It uses the IMU to calculate where the antenna is pointing. This makes benchtesting difficult without having the mechanical part ready.
The setup screen with “orientation” should be the right one, but because of the v1.0, v0.8 confusion, I would use the full parameter list to setup the tracker.
The other screen is meant to setup a MissionPlanner controlled tracker. It uses just some sort of servo controller and two position servos. All calculations are done by MP.
I stopped using the Ardupilot AT some time ago, because I could not get it to work reliably and the decision to stop supporting the APM2.x killed it for me.
There are others who are using it successfully, so I hope they will help you further.

Very detailed reply. Thank you very much. Do you think if APM2.6 is
supported by AT 0.7 which is available in MP ? Will try to flash it later
to test.

Moving part of the tracker is moved by the 2 servos, so if the 2 servos
move in response to the moving of the vehicle (with a radio transceiver),
do these servos also simulate the action without mounting the APM on the
tracker ? What do you think ?

By the way, since you don’t use ardupilot AT, what do you use right now and
suceed ?

Do you have a GPS connected to the tracker?
If not, it will assume a position somewhere on the equator and depending on where you live, this might be a long distance away from the position your vehicle reports. So even if you move your vehicle, the resulting radial change related to the tracker’s position is so small, you will not see any servo movement.
MissionPlanners SITL is a great way to test the tracker. You can move the homepoint in the map before loading the simulated vehicle. If you press CTRL-f, a special options window will open. There you can select to output the simulated vehicles position over serial or network. I also used this method to test the tracker I am using right now.
It is the u360gts tracker:

It uses a Naze32/Flip32 board as the controller, plus some additional hardware.
It also requires a continuous rotation servo for pan. Setting everything up was a bit of trial and error, because most of the docs and the support forum are in spanish.

Yes, I do have a ublox NEO-6M GPS connected to the APM tracker and
satellites locked at time of bench testing, as verified by MP. And I live
in Vancouver, but this does not matter with a locked GPS.

Will let you know the progress after receiving the Pixhack FC which I just
ordered for the tracker.

Thanks again for help.

PS : I am not venturous enough to try product without English instruction.