We’ve been flying and testing v2.74b and v2.76 in a number of aircraft over the last three months namely two X8 flying wings, a Skywalker Condor 1880, a RvJet, a Multiplex Easyglider v2 and a 1.7m span twin boom own design pusher.

We have problem with the X8’s and the RvJet with loss of altitude in turns. I had quite a bit of correspondence with Paul Riseborough one of the developers, to try get to the bottom of this and we fixed a number of issues but our problem never went away.

The graph attached from a flight with the Easyglider illustrates what I believe to be the problem, what I can’t understand is the seemingly conflicting information the graph shows.

Am I seeing things, reading the graph wrong or is there really a problem here? The graphs from the other aircraft are show a similar pattern.

The Easyglider being a very forgiving airframe seems to handle this issue OK whereas the X8 particularly struggles to the point of either exceeding “VNE” or descending dangerously low.

Please can someone assist in getting to the bottom of this?

OK, I think I may be reading the graph wrong

. But we’re still getting these large variations on height and pitch during the flight. Here’s a smaller log from a Skywalker 1880 in a loiter in which there is a 22m variation in altitude during the loiter.
droneshare.com/view/c4r7vfq 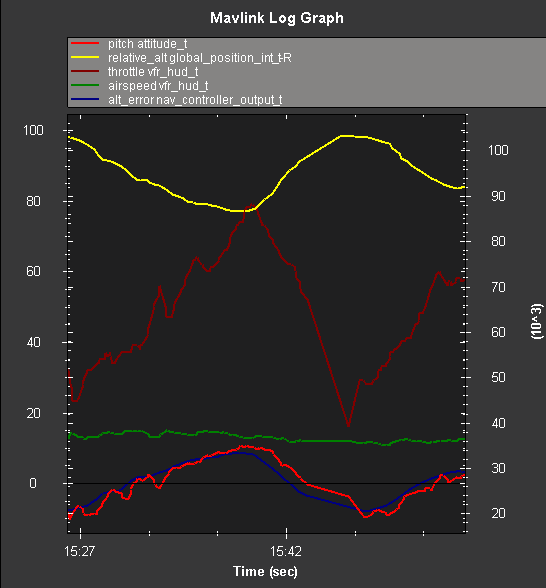 I am having the same issues with RTL… I am certain that for me… the firmware past 2.73 is a problem… I keep waiting for 2.77 to come out hoping it is fixed…

Watching this closely for a dev response.

Has there been any progress on this investigation? Are others having pitch issues with 2.76?

Has there been any progress on this investigation? Are others having pitch issues with 2.76?

No progress other than Tridge has evaluated my tlogs and told me things he thinks might help.

I have not been able to fly so I have made no progress. Still my intuition ( and engineering experience and degree) tells me its something in the firmware, at least for me… maybe just some strange combination of things I have going…

Can you provide a link to Tridge’s comments? Graham Dyer, have you made any progress, or did you give up on 2.76 and move back to 2.74b?

We tried v2.73 and immediately the problem was much better, no screaming motor or major loss of altitude, but going backwards in development is not ideal.

Oddly the v2.76 thread has been locked (at least on my side) so not sure what on earth is going on there.

To reiterate, my problem in a nutshell is this:

Can you provide a link to Tridge’s comments? Graham Dyer, have you made any progress, or did you give up on 2.76 and move back to 2.74b?

Yes my suggestions from my log file are here viewtopic.php?f=77&t=5038

I’m struggling with the same problem for several months now.
I did know there was a little effect on the compass when the plane went full throttle.
But it always had minimum impact, so I never paid any attention to it. Until the suggestion in this threat, I downgraded to 2.73 and never did an update.
So today I upgraded again to 2.78, disabled the compass trough missionplanner and all problems were gone!
It flew perfect in heavy wind.
So now I’m gonna install an external compass because I don’t have enough room in the plane. (FX-61)
Butt I’m very happy I finally found the problem. Now I can concentrate on the advantages of the new firmwares.

I think the problem lies in the programming assumption that throttle controls altitude. An age old argument. (BUT NOT A GOOD ONE!)

The apm needs to use pitch as the primary altitude control and throttle (power) for airspeed control. This is obviously not the case if your gliding. You would need to set the airspeed and max pitch limits otherwise the apm might try to climb at an unsustainable attitude.

IF ALTITUDE IS BEING CONTROLLED WITH POWER THEN ITS TERMED AS CONSTANT AIRSPEED FLIGHT AND THAT IS ONLY SUITABLE IN VERY STABLE CONDITIONS! Its not a practical way of flying, its more of a hands-off approach.
Power simply does not ‘control’ altitude, power provides the excess thrust to maintain speed whilst climbing. Flying into wind or down wind should have no effect on performance. Aerodynamically speaking the aircraft flies through a mass of air, the fact that the mass of air is moving relative to the ground (wind) has no consequence to the aircraft. Only ground track and ground speed are effected. Now because we fly light weight UAV the effect of turning into wind or downwind quickly will INITIALLY effect the airspeed. Ie. a rapid turn into wind will produce an increase in climb performance (because the wing will provide more lift from the increase in relative speed) until the thrust/drag is back into equilibrium.

As pilots this transient condition is ignored because it is short lived. UAV pilots will need to compensate more using PITCH NOT POWER to compensate for the increase or decrease in altitude. (probably why your motor stopped in an effort to loose height!)

Further to my point… all simple autopilots used on aircraft have absolutely no control over power or throttle therefore if you command an increase in altitude you must add power manually so the aircraft is able to maintain AIRSPEED otherwise the autopilot will just pitch nose up and you will stsrt to climb but aispeed will decrease proportionately to the pitch attitude. This is fine however if the rate of climb selected is relatively small.

Advanced auto pilots like on citation x and airbus / boeing will have auto throttle. You can select a constant airspeed climb or just select a rate of climb (or both). The pitch is first changed, then the auto pilot detects a decrease in airspeed (after a short delay due to inertia) and adds power to maintain speed.

The APM should be able to fly any UAV without the use of throttle! If you set say 65% power (enough to climb but not too much to overspeed in level flight) the APM should easily control altitude and much more effective control will be achieved. But first the programming needs to change!