Hi there - long time user but mostly just for fun.

Been flying an RMRC Anaconda for some time but just stepped up to an Albatross. It’s huge.

Anyway, they seem to use PX4 for everything but I’m wondering if anyone has any tuning params for one. I currently have the Anaconda flying great fully auto with a lightware lidar for the autolanding but there were some seriously good params from rcgroups that I barely had to touch that got it where it is.

I have the Albatross PX4 parameter file from them but other than maybe speeds, etc, it’s obviously not compatible. I’ve seen a few post over on github with APM users and Albatrosses so hopefully someone can help me.

Would love to see what I can do with this bird and don’t want to switch to PX4 since that would really mess with one, what I already know but also my other quads and planes.

Really excited to get this thing airborne!

I’m in the same situation where I need to use Ardupilot for compatibility reasons with the Companion computer. Have you had any success in getting these parameters? Have you tuned it yourself?

Many thanks in advance if you can share the tuning!

I am also in the same boat, have had this frame for about a year but really wanted to get my understanding dialed in before I attempted to get this one airborne. Such a great cavernous airframe, cannot wait to get it in the air. 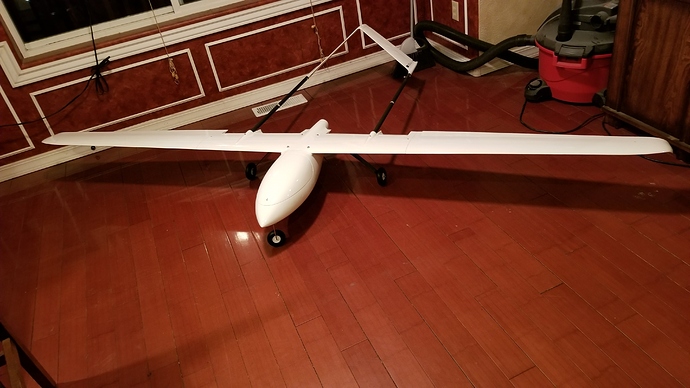 there is nothing particularly remarkable about this plane, so I would expect it will fly with the default gains, and normal tuning will work fine.
Cheers, Tridge

@Buzz has some experience with these and may be able to share some insights.

I ended up using the PX4 setup for my initial flights since it was pretty turnkey but not what I wanted. I just adjusted the min speed depending on my takeoff weights and fiddled with the min and max flare amount but I’m still planning for Arudplane once past more initial testing. Autolanding is pretty neat to watch, albeit scary the first few times I did it.

I would say that the one thing to take into account would be how long it glides for, doesnt seem to stop but I have the airbrake setup enabled which does bleed speed quickly. Reverse thrust will be awesome with this. Also, get your min speeds correct given the high aspect ratio of the wing (I was warned about this in the beginning several times to avoid tip stalling). There’s quite a lot of deflection surface on the wings but I don’t know more than that in terms of what it would mean for tuning. I would think it needs quite a bit of time spent on TECS given how much power it has but I don’t know yet. I really want to get this over to Arduplane since thats what im used to but the path of least resistance was unfortunately going with what was already tested and available. I don’t know though about just trying the standard tuning. It would seem this thing can be as mild or wild as you’d want so thats scary from my view trying a new setup first.

Hello all,
I just got back to the thread. Many thanks for the useful advice. I’ll get back to you once I get some parameters tuned. I’m still awaiting the batteries.