After Autotune plane out of control at take off

I have a very little experience with planes and the plane is a little bastard, a 60 cm delta wing , Skywalker X1, 300 grams, the plane was flying well in FBWA even if turns were very very wide , 60 meters of diameters, so I did the Autotune , the value of Servo Roll P dropped from 0,85 to 0,388 while I remains to 0,07 .
I was able to land then disarm and change the battery.

At new take off the plane did not respond to aileron stick , all way to the right (I believe so but must say that I was in panic) and the plane went left and crashed on a tree out of control .

Is it possible that Roll P was so low that aileron command was too little ?
Thanks for looking at the .Bin file and help me to understand what happened.

You are right hunt0r , it gave an error.
I have uploaded again and now it seems ok.

BTW is there a way to edit the dataflash log file to reduce his size ?
The part where the plane is on the tree and me shaking the tree to get my plane back is not so interesting

I’m not aware of a way to reduce the logfile size.

I’m also not that good at looking through logs, so I’ll give it a try in a few days but if someone else could chime in and help, I would really appreciate that…

I’m taking a look at your logfile. This is my first time trying to figure out someone else’s log, so help me out. From the RCMAP parameters, I see that: CH1 is Throttle, CH2 is Yaw, CH3 is Pitch, and CH4 is Roll.

Looking at the RCIN between 60 and 80 seconds, it seems that your pitch input was maxed-out one direction for almost the entire flight (a brief complete-reversal around 66sec). Your roll was also maxed out beginning around 64 sec. Your rudder is not entirely maxed-out, but it’s heavily-used starting around 67sec. These suggest to me that you were really pulling hard on the controls (in your state of panic, I guess) for almost 20 seconds. Note that the plane’s altitude seems to climb from 62 to 73, then it descends sharply. Does this seem right?

Thanks for the reply hunt0r.
The rc channels are as you wrote.
The whole flight took 16 seconds.
The rudder command is probably to disarm the motor when I was on the tree.

I still do not have an explanation for what happened if you look at the very first seconds of flight you’ll notice that the plane took a roll angle that it was not suppose to do, line 6, or after line 13. 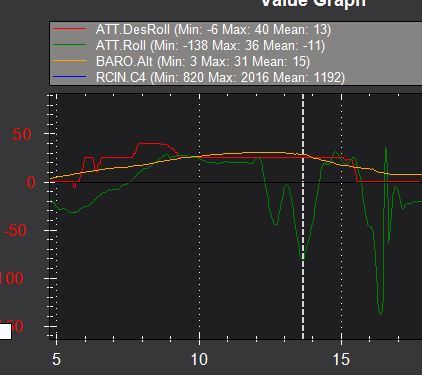 I thought it might have been the lower P values of Roll after Autotune but today I flew with more or less the same value and did not had that problem.

When I crashed in to the tree it was as if the plane did not respond to the radio commands, very strange…