Is there a way that I can set the center stick in Acro mode to 5.5 so it matches Stab center collective?

Yes. I can’t tell you how to set up your RC radio unless it’s a Taranis, which I use. But I set a custom collective curve in the RC for acro flight mode by altering the channel output on RC3. My curve looks like this: 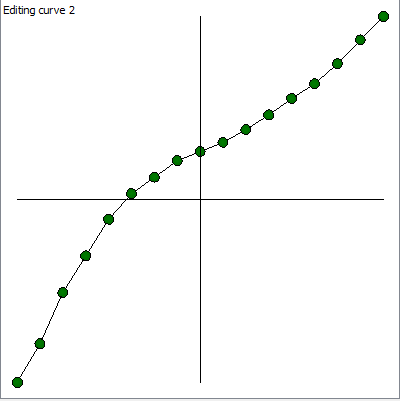 I use a logic switch in the RC to examine the flight mode switch position and throttle hold switch position (in case I am in autorotation). That logic switch flips the acro collective curve in or out so the collective lines up with altitude controlled flight modes. There is a slight delay in ArduPilot when the mode is switched. So I have the curve set in the RC to slew in or out to match ArduPilot’s speed of changing the flight mode.

Since Acro is a fully manual flight mode you can do this with mixes from aileron to rudder, custom expo for cyclic/collective, etc… to tune acro handling just like you would with any FBL unit. The other flight modes WILL NOT like these custom acro settings, however. So make sure your RC flips them out when you change the flight mode switch.

Thank you for your reply.

That is a perfect and easy/logical solution. I am new to Frsky/OpenTx (Horus) and still learning. I have been using JR for the past 20 years or so. It will take me a bit of time to learn the OpenTx ways. I switch to FrSky because of the Yaapu Ardupilot Telemetry, which I find unequal.

Most of my take off and landings are in Acro mode as I like to check and get a feel of the controls before switching to Auto. The change in altitude was quite annoying to me.

In OpenTX it is quite easy. Go to your curve editor in the Companion app and make a suitable curve. Apply that curve with the mixer on channel 3. And in the logic switches you can define a logic switch (or two) to flip the curve in or out with the flight mode switch. There is about a 0.7 second delay in ArduPilot switching the modes. So in OpenTx you can define how fast you want the curve to come in or out. and it will slew the output of your collective channel accordingly.

Takes a bit of testing in hover to get the curve exact so it lines up with the altitude mode collective. But it works flawless once you get it tuned in. I sort of developed that method as I am the same as you - prefer acro for takeoff, landing, general flying around - but there is no way in ArduPilot to get those two to line up, nor does there have to be. The RC is more configurable for doing things like this than adding a bunch of parameters to try to tune it in the autopilot code.

There is parameters to set a custom curve for Stabilize in ArduPilot. But even those are only a four-point curve and does not work as well as defining a 15 point custom curve in the RC. In OpenTx you can define the curve to be either linear between the points, or a smoothed curve.

Edit: Nader, I knew I had showed somebody else what I did with this. And this is not my final setup. But it is an example of how to apply the curve with a mix in the mixer, in this case just flipping it in or out with the switch that changes the flight modes. 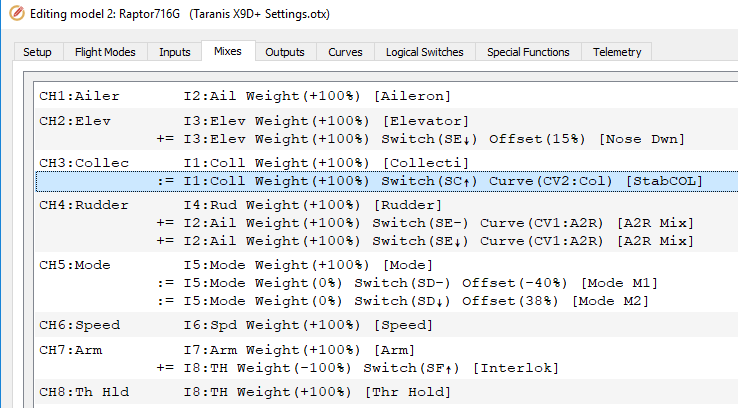 I’m sure after you get to playing with it a bit you’ll figure it out.

That is perfect, thank you so much for taking the time and explaining and showing, in detail, how this is done in OpenTx. It is a bit different than to what I am used to in JR where by default each flight mode has its own collective curve, but all makes sense and easy to understand. Of course, after an expert explains it to you

Perhaps posting here that memory from the Taranis would be great as a general recommendation ?

You mean the OpenTx settings dump? That could be a little hairy as somebody could try to load it in their radio, and no two of these things are the same. I got three Taranis X9D+ radios for the survey heli’s and no two of them are identical.

Basically, all the instructions on how to do it are on OpenTx University. Anything you need to know about how to configure OpenTx is on there.